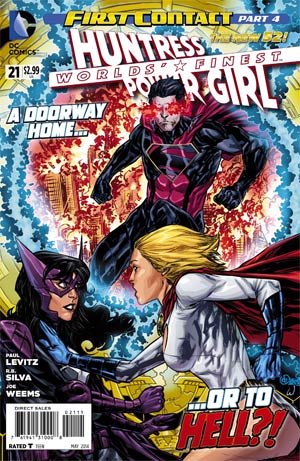 Click to enlarge
As Power Girl and Huntress head towards the portal, which could send them home to Earth-2, Kaizen begins to absorb the portal's energy as he begins to transform into something else. Power Girl tries to fight but Kaizen throws Huntress towards the portal to test it; luckily, Superman catches her just in time. Then, Power Girl throws Kaizen through the portal. Power Girl and Huntress decide to return home through the portal, but before they can Kaizen returns bigger than ever and the evil Earth-2 Superman returns with him. Earth-2 Superman sends Parademons after them as the heroes work together to take them out. The alternate Superman tries to get Power Girl to return to him, calling her his "secret weapon," but before she can make the choice Huntress destroys the portal. She explains that she wasn't sure if it was really their home or not, to which Power Girl reveals that it was. They decide to keep looking for another way home. Back on Earth-2, the evil Superman burns Kaizen alive for failing him.

Story - 4: First of all, what is up with DC?!?! This issue came out a whole month before Batman/Superman #9 (Part 3 of "First Contact") and has been sitting on my desk waiting to be reviewed! I don't know what has been going on behind the scenes at DC, but I hope something like this never happens again as I almost spoiled myself on the ending to this story without even having read Part 3. Come on DC...

But back to "First Contact"! I liked the ending to this story. Power Girl and Huntress don't make it back home to Earth-2 (which means there's still something for them to do in their book) but they also get an extra incentive to get home as they need to find out what happened to their Superman, who has basically become Darkseid at this point.

There were a few little things in this issue that I didn't like. I wasn't a fan of Batman and Huntress fist-bumping, as that was out of character for Batman. I also didn't like that Power Girl flipped out at Superman for x-raying her, because all he was doing was making sure she was okay, and then she goes on like she didn't just get mad at him. It felt very forced and wrong to me.

However, I did like Batman and Huntress fighting side-by-side against the Parademons, that was cool. I also liked that she gave Batman a hug later in the issue, which caught Batman off guard.

Anyway, that's all I've got for the final chapter of "First Contact". It was a very action-packed issue, which I really liked and think we needed after Batman/Superman #9. It's been fun everybody, but to be perfectly honest, I'm glad this story is finished. I went into it with such high hopes, and though I wasn't exactly disappointed, I was a little underwhelmed.

Art - 3: I really wanted to give the art on this book a 4 but I had to go with the 3. I really liked how the characters, especially Huntress and Power Girl, were drawn, but I HATED the way Silva drew Superman's face. It just wasn't right. Now, the Earth-2 Superman was spot on and I loved how he was drawn, face and all, but the normal New 52 Superman was all wrong.

Cover Art - 4: This cover was great. It drew me right to the book! Earth-2 Superman looks great, and Huntress and Power Girl are prominently placed on the cover. I wish there was some Batman and Superman action on here as well, but at least we got A Superman.