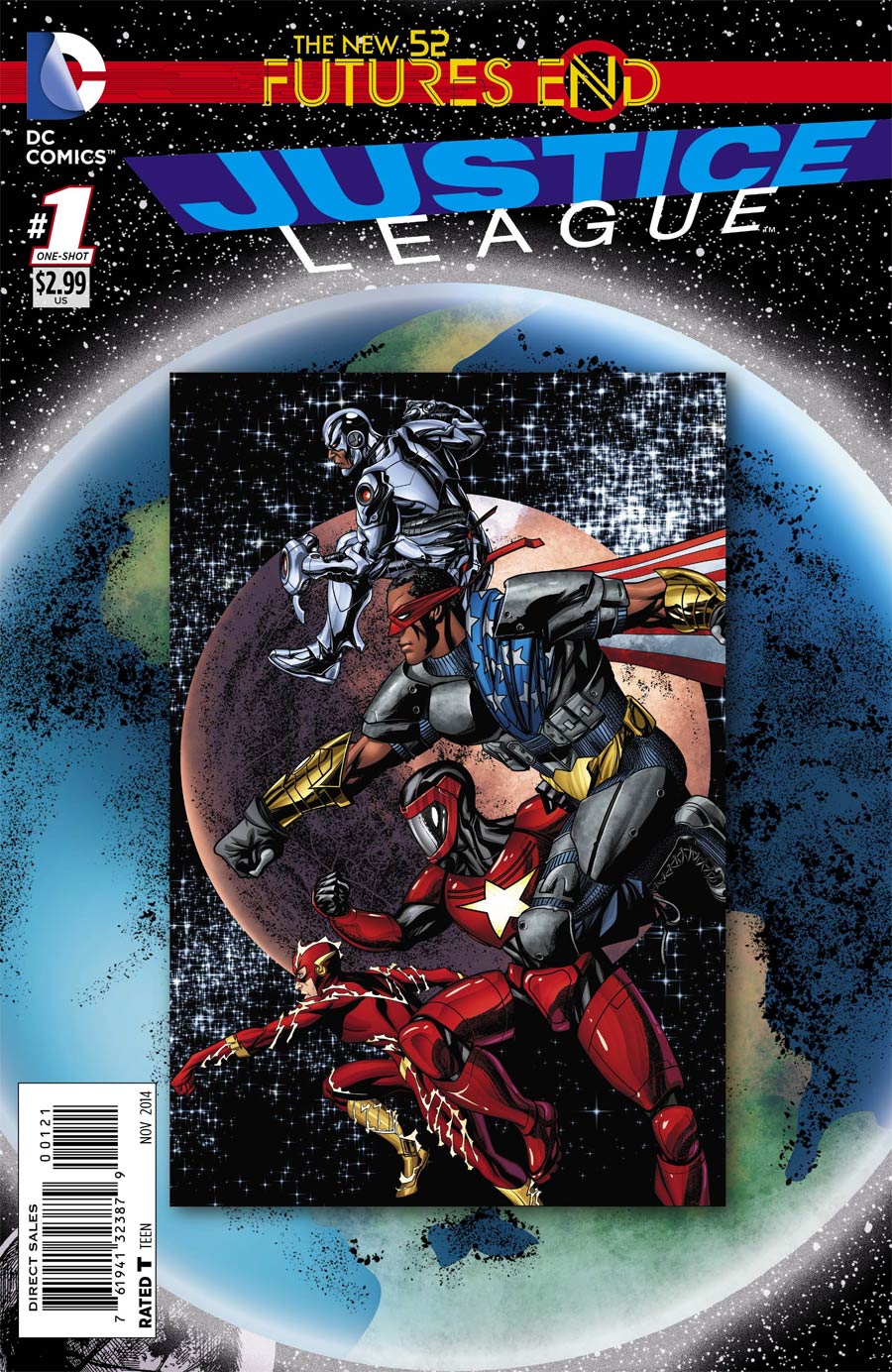 Click to enlarge
FIVE YEARS FROM NOW... On Mars, the Justice League is in a battle with some of their worst enemies who they have locked away on this planet to keep from the people of Earth. Meanwhile, Captain Atom has been revealed to be the culprit as it's revealed that he has killed millions of people in the past. Growing, and thus destroying the prison, Captain Atom takes on the League, now joined by Wildfire who returned to help the team, demanding that they lower the field over Mars so he can leave. Meanwhile, Grodd attacks Equinox, Stormguard, and Dawnstar until Equinox over-powers him, sending the team to find Martian Manhunter and wake him up.

Outside, the League continues to fight both their enemies and Captain Atom in order to defend their ship, their only way home. After defeating the super villains, they turn their attention back to their former teammate who decides to blow himself up in order to knock out the force field surrounding Mars. Just then, Martian Manhunter, posing as Equinox, confronts Captain Atom and gets into his mind, making him "human" once again. The League tells J'onn that he should come back home to Earth with them, but he replies that Mars is his home and the prisoners need him there.

Story - 3: I will say that I thought there was more, possibly better, action in this issue that in Part 1 and that was good, but there also seemed to be a little less story. I personally loved the use of Martian Manhunter; it felt a lot like the J'onn J'onzz that I know and love from the Justice League animated series, and it was cool to see that again. I'm still trying to figure out why there are Legion members on the future Justice League (5 years future, not 1,000 years), but I do really like the characters of Wildfire and Dawnstar, so I can't complain too much.

The Doctor Manhattan...err, I mean, Captain Atom thing was interesting. I mean, the whole thing really felt like it was out of Watchmen with Justice League characters thrown in, but it was kind of neat to see Captain Atom in the role instead, especially since he's a character that can be reasoned with more-so than Doctor Manhattan from the Watchmen book, as least that's how it seems.

On another note, is anyone else getting sick of seeing heroes become villains all the time? I for one am done with it! Books like Earth 2, Injustice, and Smallville doing this don't bother me because they're alternate stories that I can read, enjoy, or put down realizing that they're not the "mainstream continuity". Believe me, I LOVE the Injustice book, but how much darker do our heroes need to get in more mainstream comics, television, and films? I'm not going to write a whole essay on it, I could but I won't, but I think there's a good question to be asked here. Why do comics, specifically DC here, continue to give us warped and twisted versions of the heroes that we all know and love? What's wrong with doing the right thing, the good thing, being the hero? I feel like just about every DC hero out there is pretty edgy right now, except maybe The Flash. Batman's always been this way, that I get, but I remember when the New 52 first came out and I was reading Justice League and I saw Wonder Woman with a sword just tearing up the place. I'm not saying her having a sword is bad, in fact I like it, but what happened the more caring Wonder Woman? Believe me; I had that same issue back when she killed Maxwell Lord as well. I'm not saying every hero needs to be a "goody-two-shoes", but at the same time I certainly wouldn't want my own children reading about a Wonder Woman who runs around with a sword cutting things heads off or about a Superman who would rather punch Metallo's head in than reason with him first.

Anyway, that's my little rant. I enjoyed these two issues and I hope to see more exciting stories from the Justice League in the future ('s end...)!

Art - 4: I feel pretty much the same way about the art here that I did in Justice League United: Future's End #1.