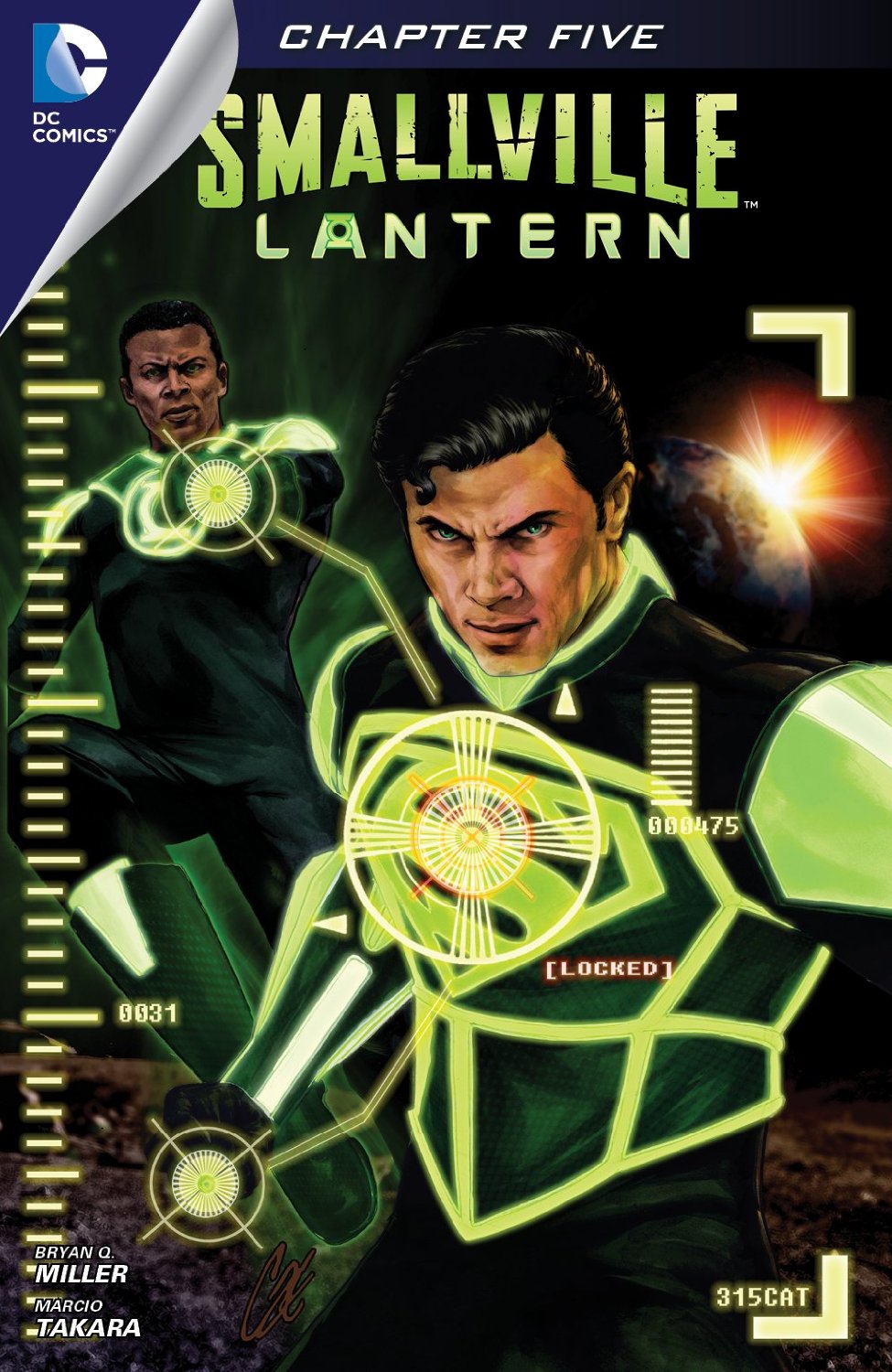 Click to enlarge
Diana, Steve, Lois, and Oliver are looking into the recent weapons burglary. As it turns out, although Prometheus was able to avoid detection by the standard security devices, mystical agents were able to conjure an image of him for our heroes. Prometheus has been pilfering items from past Smallville adventures - like "Guardian", "Detective", and so on.

Their investigation is interrupted by battle sounds just outside. The Manhunters are chasing Superman and John Stewart across the Metropolis skyline. Their rings are unable to defend against the Manhunters' attacks, so they take the battle outside of Earth's atmosphere - and to the moon, where there's a base of robotic soldiers like those in "Guardian".

The Manhunters claim the Green Lanterns have violated a treaty, but Stewart says he has no idea what they're talking about. Digital Tess arrives leading an army of Guardian robots, and the subsequent battle reveals yellow rings powering the Manhunters. This prompts Stewart to fall back, and Superman uses his heat vision to incapacitate the attacking Manhunters.

Elsewhere, Lex is visiting with "Mrs. Hunkle" at the former headquarters of the Justice Society, where there's a Green Lantern power battery.

Story - 3: So... there are robots on the moon. Not the Manhunters, mind you. Those guys came from an asteroid in deep space. No, these robots came from Earth. To the moon. And built a base.

I had to go back and recheck, and I believe these are drones that Emil Hamilton was building. Still, I must've missed something about them ending up on the moon with a base.

Not to mention Tess's sudden power upgrade. Don't get me wrong, it's nice to see Tess flex her muscles and act as more than Smallville's Oracle. But I've been under the impression that, outside of Watchtower, she can only inhabit high-end technology (like the killer robot she took over to attack Lex in "Hollow"). And she certainly never had the ability to transport herself almost instantaneously to the moon in order to lead an army of robots. At least, nothing suggested it. I'm fine with her having that power. But it all seems contrived and convenient when it feels like it's been introduced just to resolve a situation.

Continuity hiccups aside, this series started off as really enjoyable. I liked the introduction of John Stewart as a hard-boiled detective so much, I was willing to ignore the complications that created and just enjoy the ride. But this issue has left me really scratching my head.

I would've knocked the score down even lower, but it's still a fun read. So there's that.

Art - 3: I don't know if I'm coming around on this style or just learning to accept it, but it doesn't bug me as much as it used to. I'm not ready to give it a higher score yet, but I'm willing to not rag on it as much in the review.