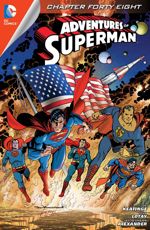 Click to enlarge
In 1926, a young Clark Kent tests his powers by jumping from the Kent house to the Kent barn. Krypto barks in full support. However, Ma Kent is not too happy at Clark's antics. She's afraid Clark will get hurt.

But like all boys, Clark is unafraid. He finds great joy in testing his limits. It's a character trait that follows Clark into adulthood.

And billions of years later, Clark Kent, aka Superman, is watching over his friend Anu. Superman is telling the dying god Anu the story of Kamandi. At Anu's death, Superman will become the last being in the universe. A lonely place to be...

After Anu dies, Superman flies into space, and watches his universe die. He proclaims that there is hope in its death. Because, for Superman, there is life on the other side. With the death of an old universe, there is the beginning of a new one.

There is an almighty explosion. As the universe cracks, Lois Lane appears. She is just a memory, standing on an asteroid in space. She is there to remind Superman of what he is there to do... he's there to save humanity. So, off he goes to do so.

Through a tear in the universe, Superman sees the old rocket ship form part one of this tale. In that rocket ship there is the new beginning. Superman had never forgotten them. And now he was, indeed, strong enough to save them. It might have taken billions of years, but Superman never gives up. Never.

The astronaut thinks that they have only been in limbo for five minutes. He is not aware that billions of years have past. The poor man is shocked to realize that all he has known is now no more. But Superman promises that no matter what the new universe holds for them, he will help him through it. Superman will always be there for him.

Story - 4: The Good: At first, I wasn't sure I liked this ending. It was weird. And who the heck was Anu? But after a couple of re-reads, and after a little bit of research, I understood what Keatinge was trying to convey. Keatinge's tale reminds us that Superman is timeless. And even when the upper echelons of DC get the character wrong, we have the past to go back to, and a future to hope for.

Also, it was great to see Krypto and a young Clark Kent testing out Clark's powers. And I didn't know Clark's middle name was Joseph. Very cool. Also, if you notice, young Clark looks a lot like Cooper Timberline who played the nine-year old Clark Kent in Man of Steel. He's even wearing the cape Timberline was wearing in the movie. I just love call backs to other Superman lore.

The Bad: I'm beginning to understand how little I actually know about Superman. I've read Superman comics, seen the movies and watched Smallville, but the Adventures of Superman comic book has opened my eyes to a whole new side of Superman. This isn't bad. It just means that I wasn't as Superman-smart as I thought I was. I've always known his optimism and hopefulness, but I had no idea about all the weird and wonderful characters he knew. However, smarty-pants here can't wait to learn more.

Art - 4: The art is good. Though it was a little odd that it's so different from part one and part two. The change from Ming Doyle and Brent Schoonover's work to Tula Lotay and Jason Shawn Alexander's artwork was a little jarring to the eyes. But it was fun to see all the Supermen from the different times and universes. The only one that surprised me was the 'fat' Superman. Ma Kent's cooking must have been really good in that universe/time. It was fun to see.