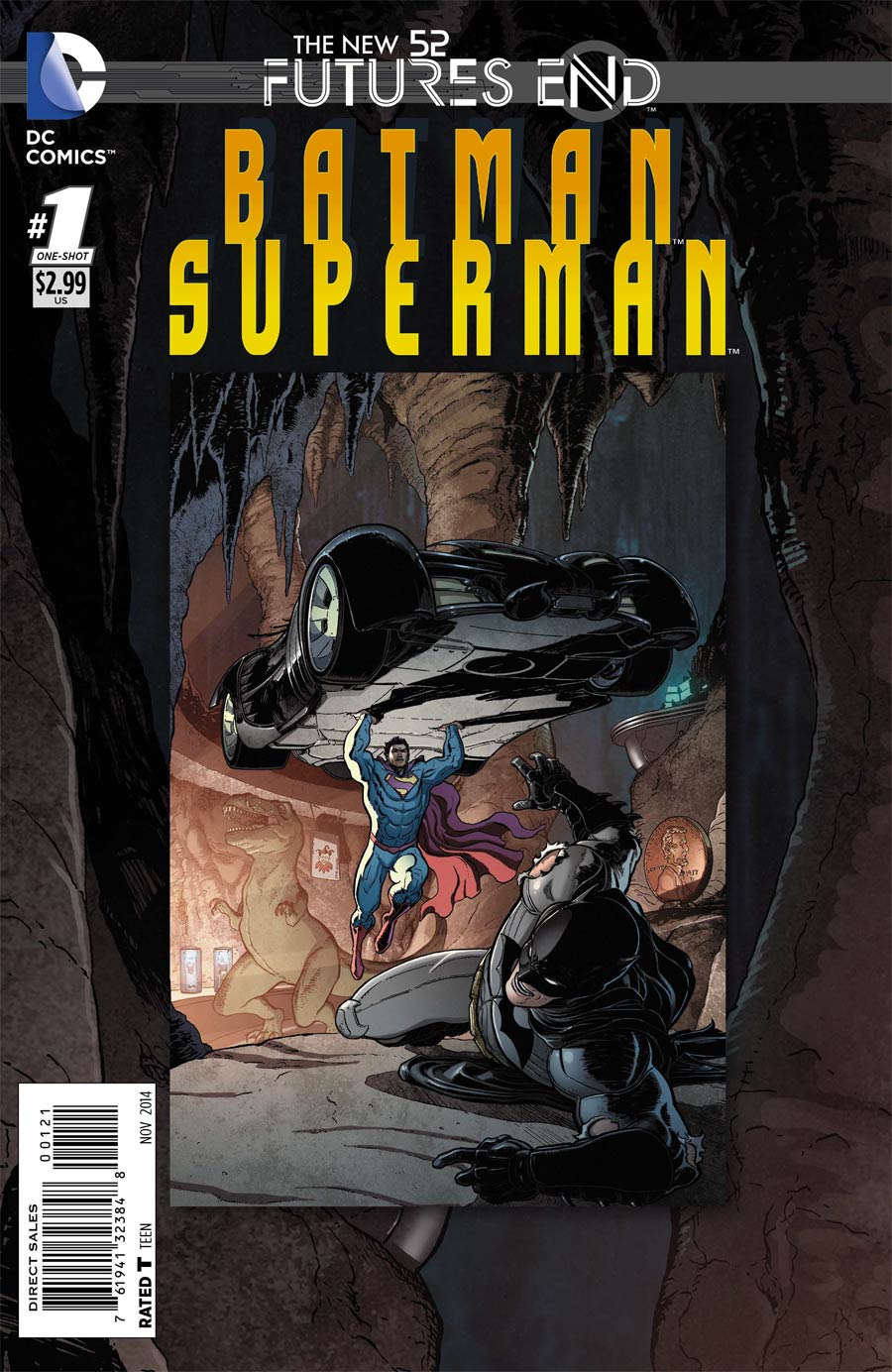 Click to enlarge
Bruce Wayne may be too stubborn to say the words out loud, but he knows the truth.

And no one, can replace Superman.

Not even him. Not even The Batman.

On Earth 2, Superman has disappeared. And it's Batman's fault.

The ever faithful Alfred is by his bedside.

Four years earlier, some sort of interplanetary war had engulfed Earth 2. Earth survived the war and life is moving forward. As happens in the midst of victory, the world comes together in a brief moment of solidarity. But alas, the moment is just that... a moment. And a wheel chair bound, sardonic Bruce Wayne becomes a witness as small doses of evil begin to creep back into the world.

All through the story, we read Bruce's thoughts about Clark. Where is Clark? Doesn't he know that the world still needs Superman?

For four years, Bruce valiantly tries to fill the void, but his mangled body and his broken spirit are not enough. It doesn't help that Batman is somehow directly responsible for Superman's voluntary departure. Though Bruce refuses to ask Clark for forgiveness for this mysterious act, it is obvious that the guilt weighs heavy on his shoulders.

At one point, Bruce, back broken, swallows his pride and verbally calls out to Clark. And there is no answer. There is only silence. It's a sad moment.

But one has to wonder what terrible thing Bruce did to make a man, who is usually so prone to forgiveness, not forgive his best friend.

Maybe we will find out in the next issue.

Story - 4: The Good: The story left me wanting more which is what a good beginning does. I know for some it might be frustrating, but I like the mystery surrounding Superman's disappearance. Obviously Batman had to make some sort of terrible decision to end the interplanetary war, and Superman did not approve of this decision.

As a matter of fact, I believe that Superman somehow felt betrayed by Batman. Bruce mentions that both Superman and Batman have their 'limits.' Apparently, whatever Batman did caused Superman to reach his 'limit.' Meanwhile in the future, we see Bruce quickly reaching HIS 'limit.'

I love the portrayal of Bruce Wayne. In this issue, he's not so much brooding as he is sad. I like the idea that he misses Clark. Not just Superman. He misses his friend.

Bruce also know that he can't be that beacon of hope that Superman is. But in the end, he will do what he can.

The Bad: Except for the cover and a flashback, we don't see Superman.

In the flashback, we see Superman attacking Batman. I don't care how mad he was, I don't believe Clark would do that. I also don't believe Superman would go into hiding for so many years. The only time I've seen him do this in the comics is when he considered himself a danger to others.

Art - 5: The art inside the issue was awesome. Though there are three artists, you cannot tell where one artist's work ended and the other began. The flow was seamless.

Facial expressions were spot on. I could tell when Bruce was disappointed, determined and vulnerable. The lighting and shading on the faces was perfect. The action scenes were clear cut and easy to follow.

And despite his sadness, Bruce looks hot. Just saying...

All in all, a great issue. Can't wait to see more.

Cover Art - 3: I also don't like the cover of this issue. Artistic value aside, I don't like the idea that Superman would pick up the Batmobile and toss it at Batman. I mean, what in the world could Bruce do to make Superman so mad?

I also don't like seeing Superman in a blurry mess.