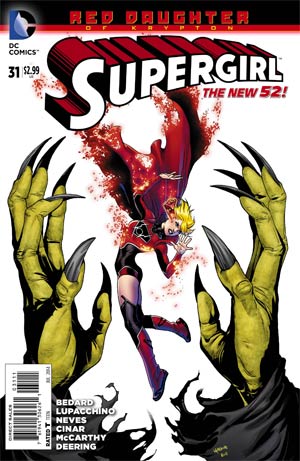 Click to enlarge
Primeen is crawling with Red Lanterns. Guy Gardner's team wants to find the new Red Lantern Judge Sheko without harming the natives, while Atrocitus and the feline Dex-Starr are willing to cause countless deaths to recruit her. As the injured Bleez rests, Kara Zor-El finds the rage-filled alien. However, the power of Supergirl and her Red Lantern ring may not be enough to stop Sheko.

On Earth, Siobhan Smythe's roommate and her friends are using an Ouija board. Unfortunately, they conjure up Blaze, who is searching for Supergirl. With Kara Zor-El away with the Red Lanterns, it looks like the demon may have a long wait ahead.

Sheko is passing judgment on Supergirl. From the destruction of Krypton to H'El's death at her hands, Kara is forced to relive her past. A facet of her memories, that of her mother, aids her by forcing the Red Lantern Judge out of the Lost Daughter of Krypton's mind. Supergirl has been declared innocent by Sheko. This buys the Maid of Might time to get the Red Lantern blood in their spaceship. It will help Sheko think clearer. This may make Atrocitus' mission more difficult as he discovers the existence of not one, but two new Red Lanterns. Now he must change his plans slightly as we will discover next week in Red Lanterns #31. Will Supergirl interfere with Atrocitus, or will he be more than what even she and Guy Gardner bargained for?

The Diasporans are in hyperspace heading for Earth, where their lord, known only as Worldkiller-1, intends to get revenge on Supergirl. Between the Red Lanterns, Sheko, Atrocitus, Blaze and the Diasporans, Kara Zor-El is going to have her hands full in the months to come.

Story - 5: I've already said a million times that Tony Bedard has had an incredible run on Supergirl. To say anything more would be me risking to repeat myself. I tend to take time to warm up to new writers on comics lately, but Bedard has been an exception to that rule. His stories have really made this book the most enjoyable comic reading experience in the New 52 Superman universe.

Art - 5: The art in this works perfectly together with that of Red Lanterns #30. Let's hope both books' creative teams are in sync like this more often.

Cover Art - 3: This is perhaps my least favorite cover of the Bedard run to date. It's not badly done, but it could have been a lot better. Too much white is irritating to me, and I felt something was missing.