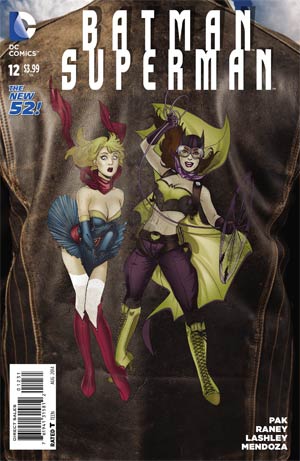 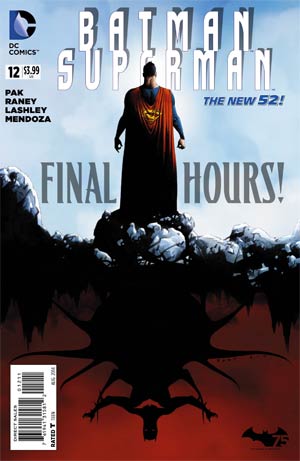 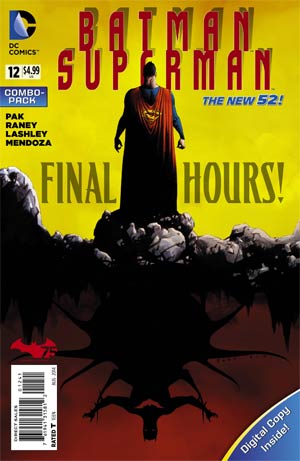 Superman and the Batman have begun to recall their adventure on Earth 2. Superman remembers Kaiyo, the daughter of Darkseid and on that recollection, she appears to offer them a choice to change the events which occurred that led to the demise of Earth 2's Trinity. The duo is returned to Earth 2, in the time before the Earth 2 Trinity's final strike. Superman sees his parents alive, about to be attacked by Paradaemons. Before he can intervene, Earth 2's Superman saves them. However, saving his parents delays him in saving Lois Lane, who is killed fighting paradaemons. Batman is given a similar scenario and rescues Alfred against his better judgement. We see the events that led to the Trinity's demise unfold again, and when Superman has the chance to effect change, he chooses to save Robin, Earth 2 Batman's daughter. Batman congratulates Superman and vice versa, but Kaiyo isn't pleased. She believes that they have become soft and no longer the ruthless vessels she needs to defeat Darkseid. Kaiyo sends them home, but not before erasing their memories of the events of Earth 2, once more.

Story - 2: I'm filling for Alisa once more, and we expect to see her back once able.

The major disappointment, whether Pak realizes it or not, is that it reads like a treatise on the Pre-New 52 superheroes, as opposed to the New 52 heroes... who are becoming more like the Pre-New 52 heroes. The story is circuitous in plot and in incidental argument, but it seems Pak revisits Earth 2 and his initial Batman/Superman work due to the reception and popularity of that storyline. Aside of that, it's quizzical as to why this story occurs and why there is the continuous need to reinvest in characters, i.e., the Earth 2 Trinity, that have been deemed ineffective and obsolete. Kaiyo reminds us that she selected the New 52 heroes world as the perfect place for her to hide from her father, Darkseid because they were ruthless and dangerous; the perfect heroic qualities that we would expect from Superman and Batman, of course, paragons of heroism that they are. If the return is to demonstrate how much Batman and Superman have changed/grown, it doesn't take, because that isn't shown. The hardest part of the story is watching Wonder Woman, Superman, and Batman go needlessly to their deaths once more, while New 52 Superman and Batman look on without the knuckle-sense to see how they could effect a positive change is just short of malpractice. Just short.

Earth 2's Superman, for all intents and purpose, is the make of his predecessor of Pre-New 52 Superman. However, Earth 2's Superman is an unconditional failure, not only in this issue, but in the pages of Earth 2 as well. He loses a fight to his younger, less experienced counterpart, he's captured by paradaemons and warped into Brutaal, becoming the worst incarnation of Superman being Darkseid's vassal, and there have been four. The reader has the delight of seeing him fail once more, as Lois Lane, his wife, dies before he can reach her. If this Superman isn't ruthless and dangerous, it's safe to say because of the human connections that he possesses in his parents and his wife. It's an interesting idea that human beings actually slow Superman down, make him less than he can be, and their removal from his life on New 52 Earth have shown the benefits of him being unchained by these connections, and it's the ruthless dangerous Superman that Pak posits. However, with this issue, Superman and Batman have gone "soft". Not because they have lessened in ability and power or because they have grown old and infirm. No, they've grown soft because they, in this installment, have shown compassion and genuine affection for others. Is it safe to say that New 52 Earth will fall to the same fate as Earth 2? It's also curious as to when this transition happens, from cutthroat to compassionate. There is no definitive moment where either character shows this growth, it just "is," because this is Superman and Batman and, of course, they're supposed to have compassion. Now. However, even now, Batman considers saving Alfred akin to him having "cracked" and one has to ask, why in the world would Batman allow Alfred, any Alfred to die? The only thing cracked here is the point that's trying to be made, and its kaleidoscopic reason.

The plan of the Earth 2 Trinity was curious to say the least. It required a frontal assault from Wonder Woman and Superman, to allow Batman the time needed to infiltrate and set a bomb that would close off the connection between Earth 2 and Apokolips. Batman reminds us that Earth 2 Batman is the most vulnerable and the most critical to the plan. Wonder Woman and Superman are the muscle. However, why is the most vulnerable member going to do the most dangerous thing? It wasn't that the bomb required Batman specifically, Superman or Wonder Woman could have planted the bomb, and the fate of Earth 2 would have been much better off. The trouble is that the Trinity was being killed off, and Batman has to be given something dynamic to do, regardless of the incongruous nature of the task. Again, what was needed to be accomplished was the uploading of a virus into the databanks of the Tower. New 52 Superman and Batman are present for the planning and the action, and it goes down the same exact way. How the five of these heroes couldn't see the flaw in their plan, a flaw that could easily have been changed, is confounding to say the least. It was a flaw that could be overlooked for the onset of Earth 2, but revisited in this manner just makes the error that much more looming and large.

Where this issue falls short is in its purpose. It seeks to entertain, but at the expense of the same characters that it tries to enliven. Batman/Superman presented a premise that with this issue has been invalidated. I won't buy that the reason why the Earth 2 Trinity died was because they weren't ruthless enough, particularly when they saved their world with their sacrifice, albeit a needless one. If said ruthlessness is now replaced with compassion, the same ruthlessness that made it possible to repulse Darkseid, will we see the same events play out for New 52 Earth that was shown for Earth 2? It smacks of saying that New 52 Earth defeated Darkseid because that was supposed to happen, which makes for poor fiction and even poorer entertainment. Kaiyo does offer Superman and Batman a salve, if you will, by wiping their memories once more, it's just a shame that she cannot do the same for readers who would like this story, and the continuity that it's connected to, to make sense.

Cover Art - 3: The dichotomy of Superman and Batman used to be Light and Dark. Now it's Dusky and Dark, soon to be Dark and Darker.