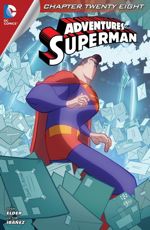 Click to enlarge
In a letter posted to Superman, young Connie Jo Gholson gushes with her adoration for the Man of Steel. It's more than just love, though. It's respect and gratitude for the inspiration Superman gives her. For a girl like Connie, hope is often the most important thing, and where better to get hope than from Superman?

Superman is Connie's favorite superhero. No contest. She could just like Wonder Woman best, like a girl is supposed to do, but Superman has all the coolest powers. Most of all - and this is the important bit - Superman never gives up. And the ideal... no - the virtue of perseverance is what a little girl like Connie needs most. Connie is a cancer patient, and her will to fight the malignant disease comes a lot from the inspiration she gets from the World's Greatest Superhero.

Story - 5: Queue brutal honesty: This wasn't a very good story. It's heavy handed and over-baked, exuding sentimentality to the point of deluge. But you know what? It kind of has to when the deeper content is considered. Truthfully, from a literary point of view this story holds steady at 3 out of 5, maybe a tad less. From an emotional point of view, and more so a fatherly point of view, this is a scale breaker. In the end, 'Dear Superman' is sweet, heartwarming, and beautiful. It is poetic, and when poetry is truly poetry, it surpasses literature.

With that out of the way, I'm going to once again be a shade too personal (see my review of issue #19), but it may help clarify why I overlooked the shortcomings of the story. I have a little girl. Her name is Hayoon. Her mother is Korean, and so we gave her a Korean name. It means "true and just". Yes, that's right - truth and justice. When Hayoon was almost three months old she was diagnosed with biliary atresia. A rare congenital liver condition, bilitary atresia is also called progressive obliterative cholangiopathy. In other words, continuous eradication of the liver. She needed surgery, but the doctors found the problem a little too late. The surgery, called Kasai procedure, should be done no later than three months after birth. The later the surgery is done the lower the statistical chances of survival. Hayoon was 84 days old.

The surgery was carried out at Seoul National University Children's Hospital. It was a success, but Hayoon's liver and entire heptobiliary system was so distorted and deformed that the doctor's weren't sure of the long term outcome. She spent time in the ICU - a tinier-than-normal three month old, underweight resting in a huge bed, tubes and pumps and wires protruding delicately from all angles. In total, Hayoon was in the hospital for three months, after which we went home, looking forward to moving on. She grew and got better. And then, more bad news.

Several months ago, Hayoon's medical team noticed unusual markings on her spine. Other symptoms caught their attention. It was discovered that Hayoon doesn't just have the very rare biliary atresia, she has the even rarer Alagille syndrome. This is a genetic disorder that harms the liver, heart, eyes, and other organs, preventing them from growing, developing, and functioning properly. Hayoon's liver is continuing to recover, but we now know that the syndrome is affecting her tiny heart, too. At the end of this month, she will undergo angioplasty in an attempt to widen an artery. And we'll take it from there.

Hayoon takes medication four times a day, and will have to for the rest of her life. We have to always be cautious of viruses and colds so as not to put too much stress on her weak immune system. My life involves a daily routine of taking care of a sick child. And that's why 'Dear Superman,' its inherent poetry aside, took me down a little hard. Hope is the theme of the story, and indeed one of the themes of Superman. I relate because hope became the theme of my life. Hope and the action that must accompany it are at the nucleus of what I do, of how I try to raise my daughter to overcome her sickness through hopeful action, and embrace the virtues for which we've named her.

Queue brutal honesty: Sometimes I'm scared, too. I fear that my hope and actions aren't enough, that things may turn for the worse someday, and I mean someday too soon. But when I feel that way, there's Hayoon, giggling at Tom & Jerry, dancing to Brenton Wood, trying to give our cat a haircut. And what else can I do but let the fear burn off by the heat of hope and love? Hayoon lives life, showing me how to hope again. It's funny. A dad tries to be the Superman, and it's the kid that turns out to be far more super.

Like Superman says of Connie, Hayoon is my superhero. She's my kryptonite and my yellow sunlight, all wrapped up into one. Imagine that.

Addendum: Related to the theme of the story, I'd like to recommend one of the most excellent and grippingly human comic books I've ever read. It's called Daddy Lightning by Tom Hart, published by Top Shelf. Also, please consider buying Superman Homepage owner Steve Younis's book A Bereaved Father. Finally, please learn more about Alagille Syndrome through Alagille Syndrome Alliance.

Art - 4: This is mostly exceptionally well drawn, inked, and colored. There are rough spots, but there's nothing overly jarring. The colors are particularly interesting, with an almost crayon-like quality about them.

Cover Art - 4: I like it. It's different. It has an anime quality about it that I've never seen Cheeks do before with Superman. The soft lighting and colors blend well with the style. Bonus points for all the mail falling around Superman, coinciding with the "letters to Superman" theme running through the title at the moment.