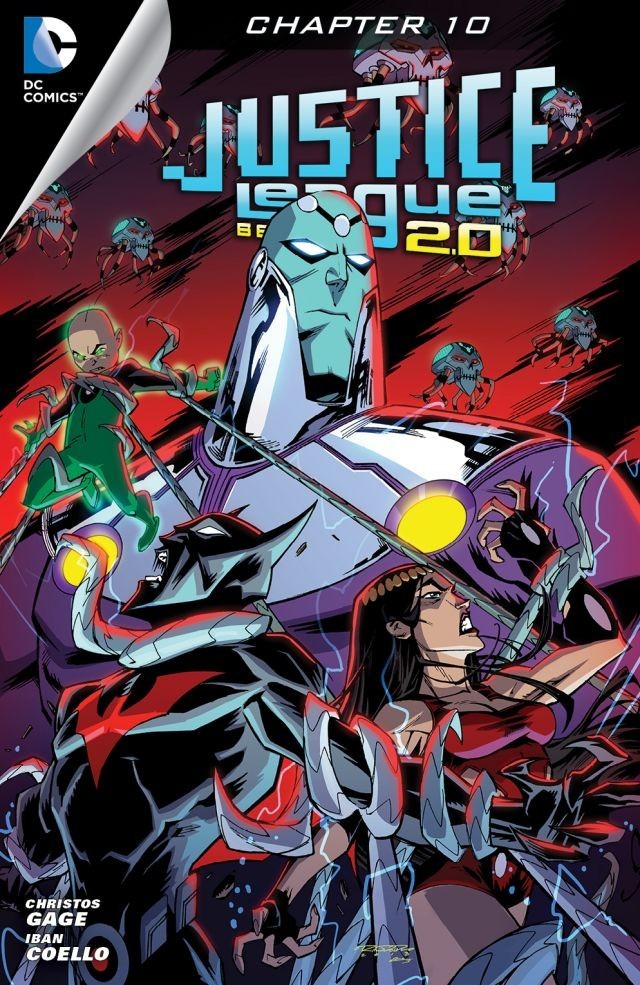 Click to enlarge
The JLB makes ready to deploy worldwide to address the situation of the world's technology coming alive, with deadly intent towards humans. Warhawk accuses Zod of being the culprit, but is reminded that Zod's control was of Kryptonian technology. The bickering is put on hold to cover various areas of the Earth, with Warhawk promising to keep an eye on Zod. Micron encounters the Metal Men and a new revelation: tech-based heroes are vulnerable and are being co-opted as well. Batman seeks the aid of friend and confidant, Max Gibson, who is keeping Batman's tech from falling prey to being usurped. She alerts Batman that the intrusive program has a purpose and is seeking the members of Undercloud. We're shown flashes of the JLB in action from Manhattan to Beijing, battling against the rogue tech, when old guard heroes the Ray and Red Star appear and add more confusion to the scene by attacking. Green Lantern (Kai-Ro) secures Red Star and discovers that his body is saturated with nano-machines. Superman realizes instantly that if nanotech is involved at this scale, only one being can be responsible. He takes to space to see his deduction realized. Brainiac has returned, with multiple ships that bear ominous features.

Story - 4: The speed of this issue was worthy of the Flash. It's speedy and quickened, without being frenetic or sacrificing plot for action. There's still a lot about this Justice League we don't know, and Gage is taking his time with a full reveal. However, Gage also seems to have a plan as to who the characters are at this point in time, and the circumstances that they will find themselves in. Ensemble pieces aren't easy, and few writers can manage them without aggrandizing one character at the expense of another, but Gage's handle seem to be pretty firm thus far. The major concern for the story at this point is that we're within another eight-part storyline of a bi-weekly comic, and the steam energy built with the last two issues can easily enervate if the next issue doesn't deliver.

If there's a(are) character(s) to watch with this series it's the Marvel Family. Perspicacious readers have noted the following:

Billy hasn't aged at all since we last saw him in "Clash".
Billy trades places with Mary, Freddy, and the wizard Shazam, but only when in the form of Captain Marvel.
Freddy can say his name without summoning the lightening.
Freddy replaced Shazam without being summoned.

Gage has been teasing these new aspects of the Marvel Family, and with any fortune, he'll dedicate some pages, if not issues to fully introducing them for us in JLB.

You really have to hand it to Gage and company for making such an enjoyable comic. It's digital first, ensemble, bi-weekly, all of the constraints that hamper other comics, but JLB does what few comics do these days: tell a complete story in a serialized structure. It's a lost art these days, but it's also how you keep readers coming back without endless cliffhangers and such. You look forward to the next issue because the current one was good, and not because it's simply the next part in a longer story. Still, it'll be a long wait until the next installment.

Art - 4: Last issue was crisp and clear. This issue looked grainy and I can't be sure if it's my iPad or the art.