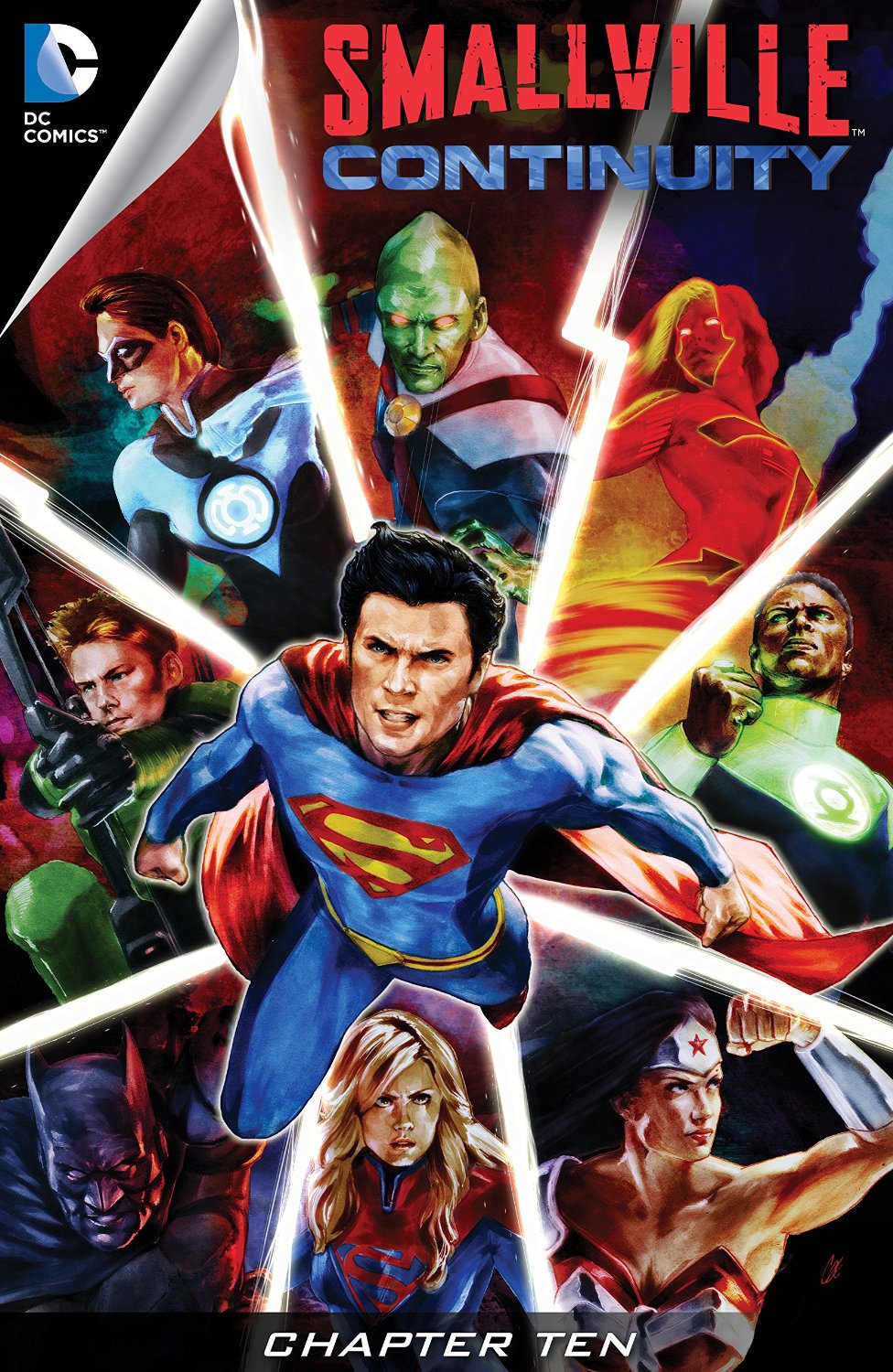 Click to enlarge
The League stands in the Fortress standing judgement over the female Monitor. The universe has been restored completely - though those that lost their lives are still gone and the female Monitor asks to join them. J'onn steps in and points out that the majority of Kal-El's, Clark Kents and Supermen never kill, therefore with the Phantom Zone gone stasis for the criminals is the only choice.

Arrow asks Clark what they do now the threat is over, Clark smiles and tells him that we should, endure, survive and live our lives and with that though on their minds they all race off. Batman says goodbye to Barbara as she leaves to learn from the collective Corps but not before leaving Batman a new sidekick to take on her former mantle.

Three weeks later Lexcorp holds a major press conference and Lex introduces the citizens to a brand new monument built on the former site of Watchtower. In a massive turnaround Lex publicly admits that if it weren't for the heroes of Earth the fate of the universe would have been lost. Then Superman takes to the podium to deliver a speech himself, one broadcast all over the world. Perry comforts a tearful Martha worried something has upset her but as the mother listens to the public address, staring at a photo of Jonathan and Clark, all she feels is tremendous pride. Martha in the White House isn't the only one watching, as the Teen Titans are in a new base and even the Legion of Superheroes watch from the future as their existence is solidified.

As the tarp falls away it reveals a stunning bronze statue of Red Tornado, Martian Manhunter, Arrow, Green Lantern, Wonder Woman, Batman and of course Superman!

Story - 5: Everything seems too good to be true. With two weeks left I can only guess at what is to come. Everything that has been leading up to this has neatly woven together and we're seeing things paying off in ways we never dreamed could have happened when the show was still on and indeed as it ended. The twists with Barbara and her legacy were genius and Superman, his speech along with a look into Martha's life, were just brilliant.

Bryan Q. Miller should take on a Superman book when this series ends because I just can't get enough of how superb this book is.

Art - 5: Some fantastic art despite the fact it was a non action orientated chapter. Di Chiara has brought to life truly iconic scenes.

Cover Art - 5: I asked for Clark front and center and I got him!

This is far and away the best of the Continuity covers!

I am going to miss the skill of the painted cover! Cat Staggs is superb at capturing the essence of the series.