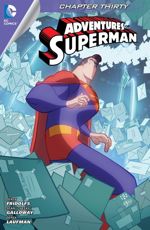 Click to enlarge
Superman and Theo, now in his monster form, scuffle in town. In an effort to get the danger away from a populated area, Superman tosses Monster Theo towards a farm on the outskirts of town. The fight continues there, and the reason Theo contacted Superman is revealed: Theo wants to be killed by Superman. Unable to restrain his horrible shapeshifting ways and fearing the safety of the people around him, Theo sees no other option but to die.

Superman reluctantly promises to kill the monster should the situation grow worse. Yet, he didn't promise to kill a little boy. Determined to help Theo, Superman brings him to STAR Labs to get help from Dr. Emil Hamilton. Hamilton discovers that Theo has a diabetic mutagenic strain that feeds on the insulin designed to mitigate the disease. There's no cure, Hamilton remarks, but he'll keep trying to save the boy.

Grateful, Theo encourages Superman to realize that it wasn't just a boy the Man of Steel saved, it was an entire town. From a distance, the clamor of trouble rings in Superman's ear. "Go," Theo says. "Maybe you can save that monster, too."

Story - 3: I liked this story a lot more on a second reading. Much of it is a bit too science fictionally convenient. A mutagenic strain of diabetes that causes the carrier to change into a monster? I suppose. It isn't the first time a disease has been associated with a fictional monstrosity. Syphilis has been associated with vampires, and some diseases, such as clinical lycanthropy, stem from and explain away the myths from less skeptical eras. It's an old hand, really, when it comes to tales of monsters; however, in this case it's just jammed too tightly into the story. With more elbow room, "In Care Of" could have been a nicely crafted, thoroughly entertaining one-issue story. Instead, its choice to toss in Luthor and Brainiac in the first part undermined any hopes of that.

The strength of this issue comes from the exchange between Superman and Monster Theo. The plea from the monster for Superman to kill him is truly time stopping. It's well timed and perfectly pitched. Unfortunately, most everything else around it isn't, and so it comes across more like a jewel in the rough instead of a tear in the eye.

I'd really like to give "In Care Of" a higher score, but I can't help but feel cheated. This could have been a great single issue if all the excess had just been hacked away. Instead, we had to sift through the fodder of the first part and buy another issue at the expense of the literature. That rubs me the wrong way.

I'd like to announce that this will be my final review for Adventures of Superman. My schedule is just too tight to keep doing weekly reviews. I'd like to welcome my replacement, Alisa Gossage, to the Superman Homepage writing staff. Please extend to her every courtesy you extended me. I'm still on the administration, so I'll be as active as ever with that. See you around the boards.

Art - 4: There's no more I can say here that I didn't say in the last review. This art is fresh, crisp and a unique way to see the world of Superman.