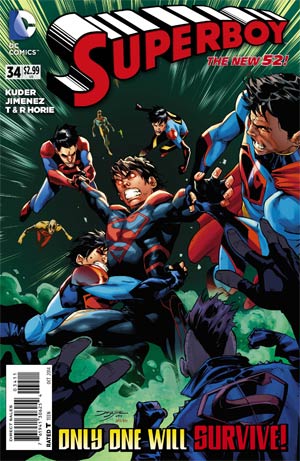 Click to enlarge
The team of good guys, good Jon and Kon prepare to face off against Evil Jon and the mulitverse Superboy's that have been pulled into the N.O.W.H.E.R.E facility. Niti, the Green Lantern, grabs them all in a bubble, slams evil Jon into a wall and crashes the bubble deep into the depths of the facility to escape. With some breathing space they recap the timeline.

In the New 52 timeline Jon did Harvest's bidding killing all the Metahumans but became mortally ill. Harvest brought evil Jon back to the present in a hope to cure him, that failed so he created Kon the clone.

When Kon travelled to the future with the Teen Titans he encountered Jon just before his trip toe present. During the fight however they switched bodies. Evil Jon masqueraded as Kon, after Kon died fighting H'El and was transformed into a herald for Oracle. Jon returns to the present where he mentally pulls Kon through space and into his body. When he is found by STAR Labs and nurtured to health he is drawn to the evil Jon and when the three meet they merged into a Superboy tachyon being. The universe pushed them into a pocket universe to prevent itself from imploding and brought them to where they are now.

At that moment Evil Jon realizes he can control all his other selves and forces them to attack the team uncovering their hiding place. One by one the team are killed or beaten to a pulp. A battle ensues amongst the survivors and Kon also takes control of several Superboy's to join the battle. With Kon leading a distraction the two Jon's face off in a final fight. The two Jon's smash through the facility exploding in a psy blast that makes the sky turn red.

Good Jon repaired time, forcing all the multiverse Superboy's to return to the exact instant they were stolen. Jon still existed and so did his history even if he was no longer 'alive'. The pocket universe reintegrated with the New 52 universe and the STAR team were now alive and well - almost as if nothing happened as Kon-El was back, alive and well.

Story - 4: And so with this final issue... nothing ever happened. Well Jon Lane Kent is gone forever and there is only Kon-El - so aside from the STAR team it's all gone.

What a way to go! It was a great issue that delivered a satisfying end to the book. One final book awaits us in Superboy: Futures End #1 but the series is now gone.

Aaron Kuder gave us an ending that was far and away the best Super book of late - all the loose ends are gone - perhaps only the Evil Legion is the only thing left that's a bit fuzzy. My niggle is the explaining the series in flashback - I know it's necessary for those that didn't endure the series up until this point but the retread just felt forced.

All said and done, it did the same job Gail Simone did with Batgirl #34... leaving you wishing the book could have been like this from day one. I hope DC has learned a valuable lesson from mishandling this book, Teen Titans and the Superman titles.

I only hope now Kon has been 'reset' that a new Superboy book will be on it's way soon... perhaps he could befriend Terry McGinnis? who knows... I guess that is the real beauty of this issue - it leaves to feeling hopeful for the character and has obliterated his awfully written baggage.

Art - 5: The art is bursting with energy and feels exciting and fun. Everything feels very fast, but that is exactly what a finale should be - the build up promised a BIG ending and that's exactly what we got. Faultless.

Cover Art - 4: A brilliant cover and like the interior artwork, it really sells the big face off of the multiverse Superboy's. As a series finale it felt to me like the wrong choice though. I think it would have been nicer to see a happy, noble and iconic Superboy posing as the title ends but that is just a personal feeling.