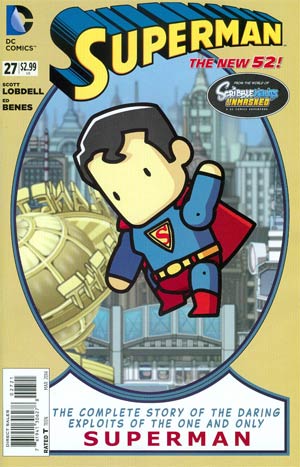 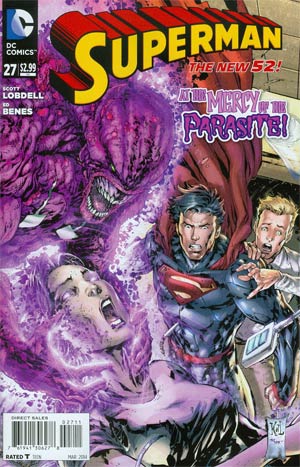 Click to enlarge
A comatose Lois reaches out psionically to Superman as she is being power drained by Parasite. The Man of Steel responds by superheating and igniting the air around Parasite's face until he drops her. Using the distraction to his advantage Superman grabs Lois and hides her in another part of the hospital - now discovering Parasite's ability is proximity based rather than contact to surface she is safely hidden. Jonathon Carroll tries to evacuate the staff as Parasite approaches him and kills the security guards on duty but an angry Superman returns and begins using his super speed to massive levels. Parasite may be absorbing his Kryptonian powers but Superman hopes he can incapacitate him before he can use his abilities against him.

Jonathon races in and does a Jaws 3D by jamming a canister of gas into Parasites jaw and shooting a guards gun to ignite it. Superman of course rushes Jonathon to safety and reunites him with Lois. He finds it difficult to explain away Parasite's attack especially as it would endanger his own secret but Parasite gives them little time to think as he rumbles their hiding place and attacks. Hearing vague hints from Parasite is enough to offer distrust in both hero and villain so Jon uses an old fire hose, with Lois in hand to swing off the ledge to another floor of the hospital.

Elsewhere, Cat Grant is facing a media frenzy at the office of ClarkCatropolis.com as other media outlets demand to know how the blog site was able to scoop them all - so much so she now has Mr Bubbles as her bodyguard. When they question why only Cat is making comments she slips inside away from the crowd and calls Clark desperate for him to contact her before the Feds return to continue their investigation into the story. Inside the locked office Cat is startled to be greeted by Morgan Edge, her former boss.

He points out in mere weeks away from PGN they have broken two major stories - Sam Lane's appointment to the Senate and Superman's romance with Wonder Woman, the stories have angered other media and made them some formidable enemies in the corporate and governmental world. He now knows he should have kept Cat and Clark on at PGN and offers $13 Million dollars, cash, to buy out their blog.

At that same time in Washington D.C. Sam is being raked over the coals for the media leak. He denies telling any one of his appointment offering up his past career and integrity as a point of reference. His shadowy meeting chair refuses to accept his offer to rescind his appointment and instead asks him to reveal his knowledge of The Tower...

Back at the hospital Superman has knocked out Parasite in the car park and scans the hospital to check on Jonathon and Lois. Clark notes that Parasite was able to siphon off Lois' power and that with prolonged contact may cure her. He kicks himself for even thinking about putting Lois in danger especially if he can't stop Parasite from killing her in the process.

Parasite awakens and reveals that the power from Lois was so strong it quenched his thirst for power but as quickly as it did it dissipated. He attacks Superman with heat vision, who uses his "S" Shield to deflect the blast upwards away from the cars which would explode with the intensity. This gives Superman a flash of inspiration - when Parasite gains power he can't control it and lashes out wasting its potential. With a blast of arctic breath the entire car park is frozen solid, any cars that exploded were now a solid mass of ice.

Parasite tracks down Lois again, slaps Jon aside and begins draining psionic power from her. Just as Lois had problems tuning the power, Parasite does too and he lashes out exploring the entire cosmos psionically in a massive bust but it suddenly begins overwhelming him and perhaps to save him, perhaps not, Superman knocks out the villain with a concentrated burst of heat vision.

Superman lets slip his thoughts vocally and Jon is shocked to hear he deliberately let Lois face danger on a theory. Superman snaps that he knows better, coldly, as Lois wakes from her coma. She is drowsy and thanks Jonathon and Superman for saving her and being at her side. Superman asks her if she recognizes him and is relieved when she reveals along with her now vanished powers, so too did her memory of Clark being Superman.

Jon tries to hide his newly assessed animosity to Superman as the Man of Steel leaves. Superman meanwhile wrestles with the fact he almost sacrificed Lois deliberately to protect his secret identity...

Elsewhere, deep in space Helspost's servants have been monitoring Earth and alert him to a potential problem stirring...

Story - 4: There is a lot to like here and equally a lot to hate.

I loved the fight with Parasite, Superman using his brain and putting a plan into action rather than pummeling away with his fists - though that did happen too.

I liked the character scenes with Cat Grant, Morgan Edge and Sam Lane, they were brilliant highlights. In fact THE best parts of the book.

The part I hated and I'm sure I wont be alone in this is the final scene with Superman, Jonathon and Lois plus the deus ex to wipe only Superman's identity from Lois' mind.

It just didn't seem to fit that Superman would suddenly turn Super-Ass to Jonathon after everything that happened this issue alone, though I understand it may be because of his internal conflict of using Lois as bait not knowing if she would die in the process. I just don't buy Superman being so cavalier with the lives of those close to him.

However, after all is said and done, it was a brilliantly put together issue.

Art - 4: Brilliant art, I'd expect nothing less from Ed Benes. The inking was a bit frenetic if I were to pick out one thing, though to be honest, that would be highlighting only a minor niggle.

Benes is an expert with action and drama scenes and doesn't disappoint.

Cover Art - 3: A bit too similar to last issue's cover offering but less emotive. Last issue offered far more impact to its cover and we get it - Parasite drains things. Would have been cooler I think to see him fighting...