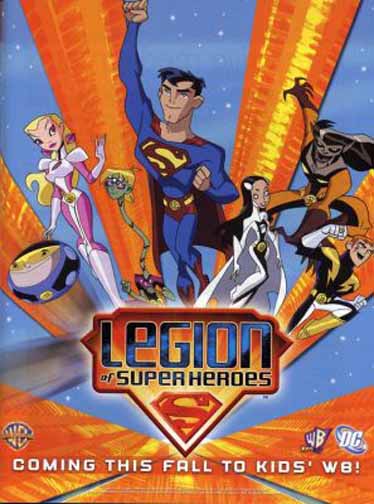 Premiered on Cartoon Network in the U.S. in September 2006.

Synopsis for Season One:
One thousand years from now, a group of teenage super heroes travels back in time to recruit the greatest hero of all, Superman, and enlist him in their fight against evil in the 31st Century. While their intentions are good, their time travel skills were not, and Lightning Lad, Saturn Girl, Brainiac 5, Phantom Girl, Bouncing Boy and Timber Wolf end up going too far back in the past, accidentally retrieving a young Superman, just before he moved to Metropolis. This unlikely Legion of Super Heroes bands together to defend the rights of all free worlds and uphold the laws of the newly formed United Planets. That is, if they don't kill one another first. Legion of Super Heroes combines humor with high stakes, grand-scale super heroics to create the ultimate sci-fi, super hero fantasy for kids of all ages. Each episode of this fast-paced, character-driven action comedy will pit the Legion against otherworldly threats and adversaries who challenge the team on both super heroic and emotional levels.

Synopsis for Season Two:
The second season of Legion of Super Heroes finds the group fulfilling their collective destiny, each member elevating his skills to new levels ... just in time to face even greater challenges. A incomprehensibly undefeatable nemesis -- Imperiex, the destroyer of galaxies from the rich annals of DC Comics -- puts the Legion into action alongside new team members. Superman returns from the 21st century with greater development of both his physical prowess and far better utilization of his powers to help the Legion toward victory in the 31st century and beyond. Moreover, the Legion finds a surprising, new ally from across the space-time continuum -- a 41st century Superman, cloned from the original Superman with alien DNA added to the mix for new, enhanced powers -- to assist in its efforts to rid the universe of this powerful foe. Along the way, the LOSH -- including new members like Chameleon Boy -- provides the perfect complement of heroics and comedy to the efforts of the Supermans.