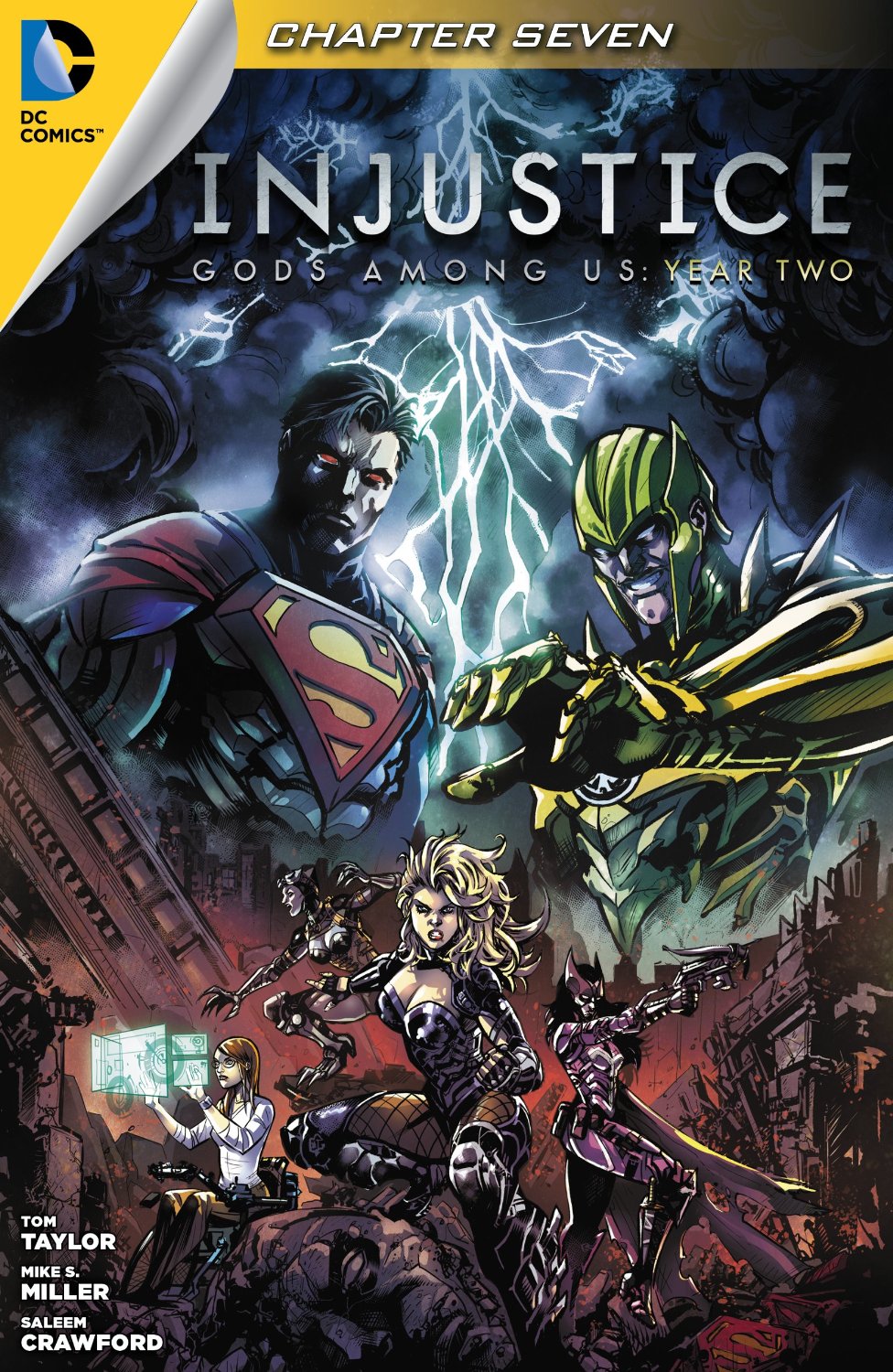 Click to enlarge
The Flash is in full disagreement with Superman. He and Lex Luthor believe that availing themselves of Sinestro's help is more than unwise, but stupid. Sinestro pleads his case, not to be forgiven or pardoned for his reputation and actions, but to be allowed to help Superman in his cause. A cause that Sinestro believes is in line with the one he once had. Sinestro relates his time as a Green Lantern, and the downfall that followed when he sought to remove "harmful" elements from his world, Korugar. Sinestro believes that help improved Korugar, but in truth, he was a despot that fomented his wife's suicide. Sinestro was removed from power by the GL Corps., and swore revenge. In an effort to put Superman and the rest at ease, Sinestro willingly surrenders his power ring, saying that while he may not be a good man, he will be needed when the Guardians of the Universe comes for them.

Story - 4: What sells this issue is the dramatic irony, juxtaposition, and characterization, all involving Sinestro. Sinestro isn't just evil, no, as he's portrayed he's full tilt mad. It's creepy at some points, sinister at others, and just comical in one. All that being said, it's more of a page-turner than has been in Injustice for some time. Green Lantern and his rogues gallery aren't the metier of this reviewer, and the general knowledge of Sinestro as a villain usually suffices for the most part. However, Taylor, if what he's penned is original, goes to a level with Sinestro that makes him the last person Regime Superman should trust... and yet Regime Superman still contemplates Sinestro's aid. Sinestro has abilities Regime Superman can use, and has given Regime Superman the necessary card to play against the Guardians, in that they didn't save Krypton, a planet that was doomed to die nonetheless. Altogether, it makes for a more interesting issue, in what has been a very prosaic Year Two, thus far.

Once more the Flash represents the Everyman, and it appears that the Everyman is both voiceless, blind, and ignored. Surely when the Flash states that the very idea of even entertaining the thought of working with Sinestro, is folly of the highest degree, he should find a ready choir just waiting to be preached to. If the Flash is ignored, then surely Lex Luthor, Superman and Regime Superman's antithesis should be given a full ear. That doesn't happen either. No, instead the full listen is given to the one person who's words shouldn't be entertained at all. What's surprising is that they actually listen to Sinestro's story with the impression given to the reader of it not being true, but new. It's one thing for Superman to not know that the Guardians didn't try to save Krypton, which is ridiculous, but to not know the history behind Sinestro, which should be ready and available on the League database is quite perplexing. It's understood that the story Sinestro tells is for the reader's benefit, but how does it serve the story?

The images displayed of Sinestro's story, from the splash that attempts to present him as initially good, because he wears the worst smile ever, to the panel that shows him taking a bite out of Killowog, a better depiction of what awaits Regime Superman couldn't be shown, right down to Sinestro's imprisonment in a red cell. He's too blind to see that his decisions cost him his wife and daughter, and that the betrayal was on his part, not Hal Jordan's. Regime Superman is just as blind to the death of Lois and his unborn child. He blames the Batman for not stopping the Joker earlier, and will end his reign in a red sunlight prison. The bite out of Killowog? Take your pick of any of Regime Superman's kills, and just as it takes the GL Corps to defeat Sinestro, is just as it will take Superman to defeat Regime. For the reader, it's a great juxtaposition, and confirmation that this is no downfall for Superman, but a willing, step-by-step decision that he makes and understands all the way through. Sinestro wasn't mind possessed or beguiled, rather, he was corrupted by possessing the most powerful weapon in the universe. Contrast that with being the most powerful man in the universe, and the scene works very, very well. If this is Taylor's intent as well, it's doubly effective, as we not only see the corruption of Sinestro, but the foolishness of the League that knows and listens to Sinestro's story and cannot see the obvious in front of them: that Regime Superman is a psychopathic monster.

Despite my issue with the subject matter of Injustice, it's usually entertaining in a "could care less about established character, history, etc." way. Every so often, Taylor does me a favor and delivers something that is actually heady and thought probing. It can be a wait for when it does happen, but when it comes, it's not just enjoyable, it's a relief. Here's to hoping that we'll have two in a row of not just entertainment, but something to think about as well.

Art - 4: Every nail is hammered home, but that splash of Sinestro cannot be taken seriously.