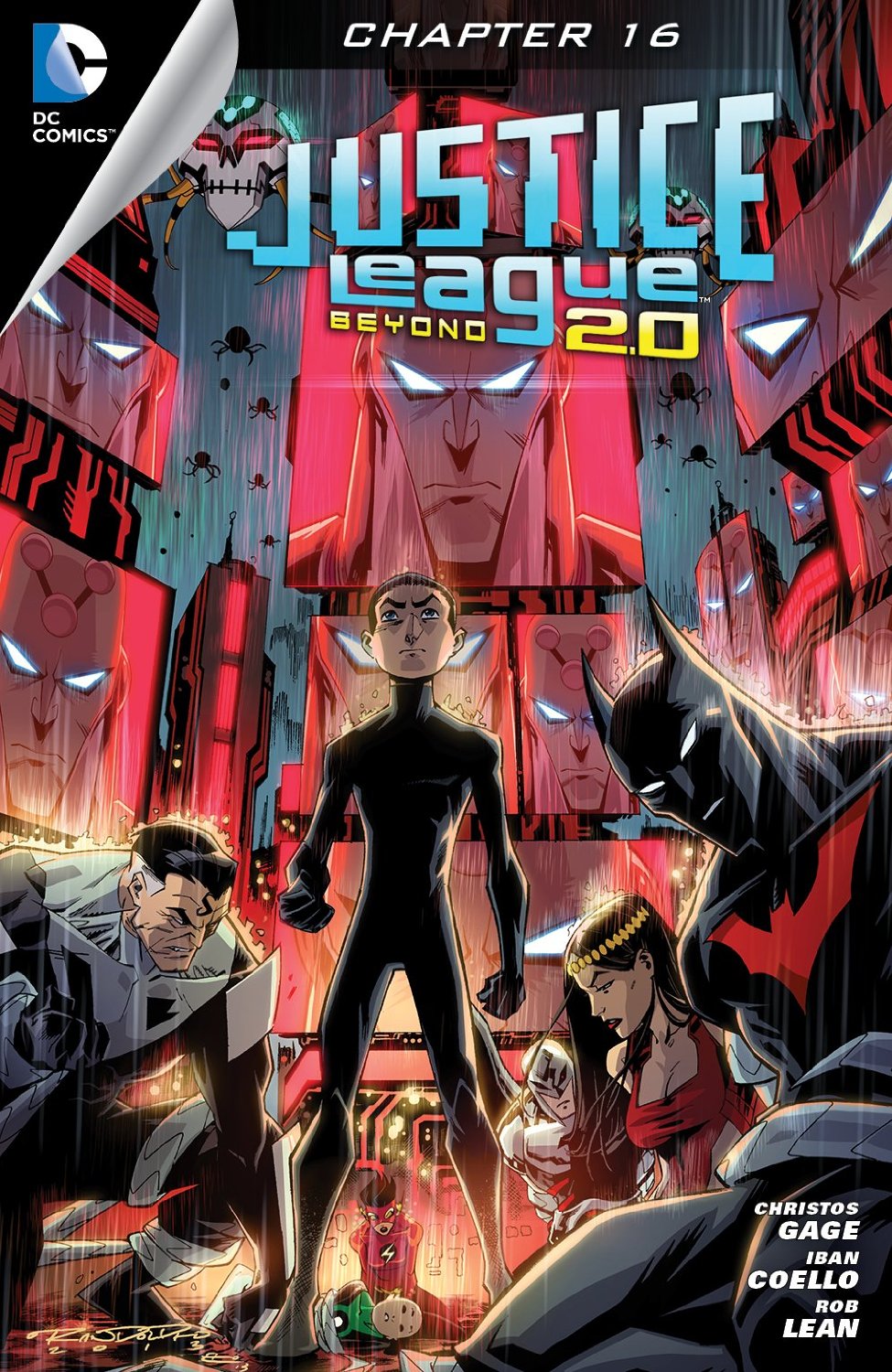 Click to enlarge
Brainiac is resisting the JLB's efforts to destroy him, as they need a strong force of magic to be effective against his Nth metal protection. They receive timely magical aid in the form of Wonder Woman, who joins the melee and hacks through Brainiac's limbs. Despite Wonder Woman's magical addition to the battle, Brainiac is still able to resist, and channels his energies into an attack that staggers the JLB. However, the Flash arrives with Captain Marvel in tow, as the magic virus that was uploaded to Brainiac's system was efficacious. Marvel is able to cause Brainiac's system to overload with one magic word, and Brainiac falls prostrate in defeat. While the others are seeing to the injured and fallen, Queen Mera asks Aquagirl to return to Atlantis and assume the throne. Aquagirl is hesitant and Mera leaves her to the decision on her own. Batman is in good spirits from the victory, but Superman reveals that Wonder Woman may have helped the JLB only to further the cause of her own team, the Justice Lords.

Story - 3: Gage's writing has been top to this point and still is top, to say it right. However, after such a steady and excellent series of installments that have hit the mark, the conclusion of the battle with Brainiac is wrapped in bathos thanks to the appearance of Wonder Woman, unanswered questions, and the new plot line that has immediately ensued. The pacing of the "System Override" story was quick and action driven, but until this issue, enough space and time were given to handle the smaller details which made for a bigger and better story overall. The most disappointing aspect of the issue, is the boilerplate manner in which Brainiac meets his end, and the plan that's hatched to house him. Gage has shown the ability to be intelligent and clever with his scripting, and it just seems that there wasn't enough room in the conclusion for all that was desired to be shown. That, unfortunately, makes for a weaker story and a mediocre ending.

Wonder Woman's arrival, while desperately needed, is too convenient and Deus ex Machina, the deadliest superhero trope of them all. Her arrival turns JLB 2.0 into Forever Evil: splash and bash, but little substance. If she had appeared after the battle was won, it would have made for a sounder ending, as it would force the JLB to find another way to defeat Brainiac, as opposed to a literal god appearing and solving the problem. The story loses precious space for a full splash of Wonder Woman, and her panels of hacking, which would have been better served with the JLB finishing the job themselves, particularly as Captain Marvel was only moments away. Wonder Woman's appearance raises some interesting questions, he physical and timely appearance foremost among them, but also as to how she's able to impact Brainiac with such force, where Barda's Apokoliptan weaponry and Aquaman's trident could not. The panels are nice, yes, but they don't quite hold up under even a light scrutiny.

Brainiac's defeat comes without answers to several questions that have been posed before and after the storyline. There is no answer for Zod, and what was the role Brainiac was to have him play. True, Brainiac does attempt to manipulate Zod, but the extent of his planning was exemplary to have one believe that all he had in mind was to make the lad his thrall. There's also the curious question of Captain Marvel and the Flash. It might be just this reviewer, but in regards to Captain Marvel and the Marvel Family, those questions need to answered sooner than later. It would actually be nice to see Marvel in a relationship, as because Billy is a lad, it's almost never done, but the obvious age difference between Flash and Billy makes the pairing look queer, if not full on illegal. That, and it would be good to understand just what the Marvel Family is about and why the lightening works in the manner that it does in JLB 2.0. Superman's idea to place Brainiac in the Phantom Zone seems ill-advised, and Brainiac was working with Jax-Ur, who is in the Phantom Zone, in the onset storyline. In an effort to wrap up the story neatly, there are still dangling threads and require only the slightest pull to unravel what has been a top read up to this point.

The story ends in the same manner as the last arc, where a new story is right on the heels of what has just transpired, but, and while the action, almost on a par with the Golden Age stories that packed action sequences for every panel they could muster, is very much enjoyable, it threatens to overwhelm the overall story and erode the characterization that has been developed. The inception of JLB 2.0 started with Superman's powers going nova, then he de-powered himself, then the Phantom Zone, Jax-Ur, Brainiac, Wonder Woman, and now the coming of the Justice Lords. That is nearly a year's worth of stories in a quarter of the time, and without a much needed pause to establish, re-establish, and answer questions, the thrill ride becomes a mill ride.

Hopefully the next storyline will be just as engaging as the last two, but also tie to together what's been done in the last two as well. I'm not a fan of stories that excuse themselves from explanation and the depth that comes with it, for the sake and excuse of action. There has to be a balance, and right now, as of this issue, the scales are tipping too much to one side.

Art - 4: The splash of Wonder Woman is frightening. Yes, she's entering the fray, warrior face, and all that rut, but she looks like a Grecian monster, and I'm not certain if that's what was intended. The scenes with Brainiac are top.