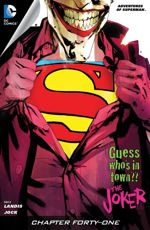 Click to enlarge
When we last left our hero and villain, The Joker was threatening to turn Metropolis into a "BOOM" town.

However, Superman removed the bombs that Joker had planted around the city. And he brought said bombs with him. Now, Joker is someone who is in danger of being hoisted by his own petard.

Joker is shocked that Superman was able to locate his bombs. After all, he figured Superman to be just a big brute. He had no idea Superman could see radio waves.

In frustration, Joker threatens to blow the bombs anyway. But when Superman points out how dumb that would be, Joker again rants at Superman. Joker mentions Batman's code to never kill an enemy. Superman responds by telling Joker that he, himself, generally doesn't kill. But in The Joker's case, he might be willing to make an exception.

The Joker decides that Metropolis isn't the town for him.

Later, Superman pays a visit to the Batcave. Batman and Superman exchange hostile words. Batman knew Joker was headed to Metropolis and used his visit to test Superman.

Superman is pissed. He tells Batman that if he puts the citizens of Metropolis in danger like that again, Joker wouldn't make it back home to Gotham.

Story - 5: The Good: Well now we know why Joker makes his home in Gotham and not Metropolis. Superman isn't going to put up with Joker's crap. I know why Superman, as a general rule, doesn't kill; however, I like the fact that he tells Joker he just might be willing to make an exception in Joker's case. I've often thought that if Batman would just kill The Joker a lot of grief would be avoided. But I know they don't kill Joker because he's Batman's greatest villain. However, it's not about Batman's moral code, it's about DC using The Joker as a plot device.

The confrontation between Bats and Superman is one that has played out again and again throughout DC literature. They are two alpha males with different backgrounds and personalities, and yet they, for the most part, have a morale code that is very similar. And while one might say that Superman was wrong to threaten to kill The Joker, it is also true that Batman was pretty stupid to let Joker set up bombs throughout Metropolis.

Turns out, Batman ain't perfect either.

Love the fly over the Earth scene. Nothing makes a Superman fan heart swell than seeing a "Superman: The Movie" reference.

The Bad: I have a confession to make. I am not sure what message Landis was trying to convey through this story. I know what I wanted to see. But I kept feeling that there was some sort of back-handed insult to Superman. I could not get over this feeling. You might say that Landis was using Joker to express his own opinion about the Man of Steel. Or, is it Superman's confident responses that Landis admires?

If you are not aware, Landis, in 2011 made what many Superman fans consider to be a hit-piece on "The Death of Superman". So, this story left me a little confused. Does Max Landis hate or love Superman? I have not read or watched any more of Landis' work. After watching that video, I wanted nothing to do with him or his work.

Art - 4: I love the view of Metropolis with a tiny Superman and tiny Joker exchanging barbs on page four. The coloring is very dark and moving. But in the end, Superman's face is in the light, and he is laughing.

I love that. It's the way it should be.

Cover Art - 5: How awesome is this cover!!! The Joker is ripping open his shirt to reveal Superman's Shield. It's shocking. It's intriguing. Superman and The Joker are going to face off! How exciting! Jock's cover tells us that this is not going to be the usual Superhero vs. Villain story.

I could not wait to read this story.

* In my previous review, I said that The Sound of One Hand Clapping was a 3 part story. I was mistaken, it is only a 2 part story. I apologize for the mistake.