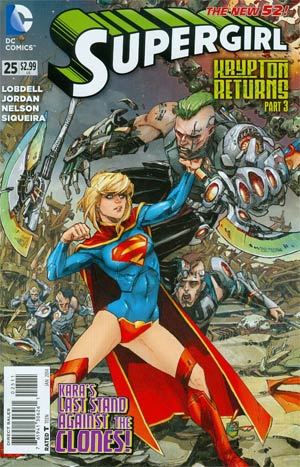 Click to enlarge
The Omniverse is in danger due to H'El's altering time to his advantage on Krypton. Temporal tsunamis tear apart all that exists. The enigmatic monolithic Oracle has sent Superman, Supergirl and Superboy to three points in Krypton's history, where they must complete their respective missions. One week before the planet explodes, Superboy must prevent Kara Zor-El from being killed by the Eradicator. Centuries earlier, Supergirl has to stop an already heated war with clones from escalating into something that could cause Krypton to explode much sooner. Superman has to defeat H'El at the exact moment of months before his home world's demise. Each task is difficult for the trio of heroes, and should they fail, all they know will be lost to nothingness forever.

As Superman encounters his mother Lara Van-El and ponders Jor-El's conflict as he learns he will be a father in the same period he discovered that Krypton is doomed, Superboy is battling the Eradicator to save the Kara of the past. Meanwhile, present day Kara is further in one of her planet's most savage periods defeating clones and being confronted by H'El. Both believe the other betrayed him/her. Yet, Kara must concentrate on her mission to stop H'El. At the same time, a time portal opens for Superboy. However, as the Boy of Steel inches closer to it, the Eradicator attacks again. Superboy kicks him into the gateway, which leads to Smallville, Kansas. He and past Kara say their goodbyes, but as H'El is fighting present day Kara, a younger version of the villain strikes Superboy simultaneously. With two H'Els existing in two points in Krypton's history, and an unseen being talking to Superman, it looks like the Superfamily is going to have a tough time accomplishing their missions.

Both H'Els are charging at their respective targets, but the leader of the clone tribe intervenes with the one trying to get present day Kara. The chief will not permit anyone who defeated him, including the Maid of Might, to be killed by anyone. H'El is not too happy with the interruption, and he intends to obliterate the army of clones. Only Kara Zor-El, with spear in hand, can prevent this from happening as she screams "For Krypton!" while preparing to defend herself against her former love H'El.

To Be Concluded in Superman #25.

Story - 5: I have to get two things off my chest. One thing will be pointed out in the art section. The other is this. I love the New 52 Eradicator and hope to see more of him. Now, on with the review.

As much as I was hoping for a longer waiting period for the next Superfamily crossover, this chapter of "Krypton Returns" has been as good as the rest of the saga so far. Admittedly, as a whole, the story does feel like Lobdell and company seem to be borrowing a bit from Doctor Who and various other sources. Yet, they've given us a fun and engaging tale.

Art - 5: Here's the second thing that I needed to get out into the open. I love two page spreads. Yet, they lose their dramatic effect for me if their on every darn page. Now, one could argue the same thing about the splash pages in 1992's Superman #75, and I would understand why even though I liked them. I felt they worked better for "The Death of Superman". Aside from that, "Krypton Returns" has looked impressive even if I felt Ed Benes didn't seem to be at the top of his game with Superboy. The art in this issue works perfectly with the epic that the creative team is trying to give us. Paulo Siqueira should be drawing more of the Superbooks in my opinion.

Cover Art - 5: I really like covers that form a larger image. I guess that's the nerd in me. Kenneth Rocafort has provided stunning art for Superman in general, but what he has done for the "Krypton Returns" story makes me happy to be a comics fan. Please stay with the Man of Steel and his family of titles for a long time, Mr. Rocafort.