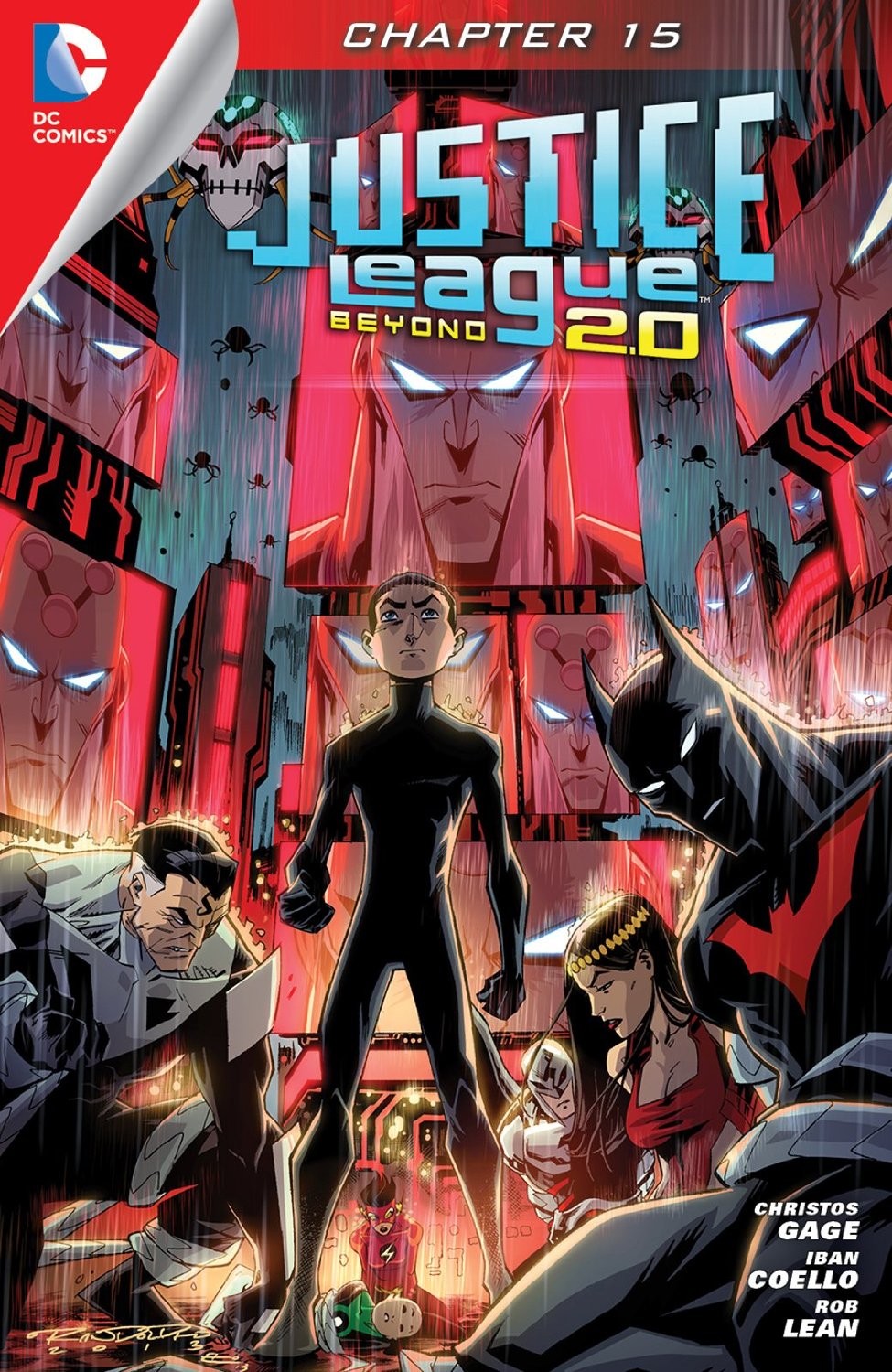 Click to enlarge
Aquaman attempts to stop Brainiac from setting foot on Paradise Island, and has his efforts easily rebuffed. The JLB seeks to press their forces against Brainiac's final form, but begin to lose their magical allies, Faust and Klarion, who abandon the fight to save themselves. Mister Miracle devises a plan to infect Brainiac's body with the help of Aquaman's trident. The attack is successful, but Aquaman is incinerated in the process. Aquagirl seeks to avenge him, and with the rest of the JLB, a pile-on attack ensues to deny Brainiac a chance at escape and reforming elsewhere. While the battle rages on, the Flash and Micron continue to spread the virus throughout Brainiac's network. After Brainiac stumbles into a structure, a flash of energy strikes a rostrum, and from out of it appears what seems to be a familiar Amazon.

Story - 4: Sequenced events, check. Pacing speed at optimum, check. Characters ready to go, check. Blended seamlessly and aimed straight for the heart of entertainment, double-check. Gage turns in another enjoying installment of Justice League Beyond 2.0, and keeps the reader in the lurch yet again, as we've still no substantive solution as to how Brainiac will be finally defeated. Everything that the JLB has thrown at him has failed, and even the virus that is being spread throughout his system is contingent on the hope of this reviewer that JLB 2.0 is finding its way through his system, thanks to Micron and the Flash, is dependent on the JLB's success on Paradise Island, which looks to be anything but certain. Their abandonment by Faust and Klarion is apropos of what should be expected of characters of their ilk and it's a reinforcement of how bleak the situation is, despite the JLB showing no signs of backing down or giving in.

Brainiac's dispatching of Aquaman lacks the dramatic edge that it could have possessed, as it isn't made certain whether he's alive or not. If Aquaman has been sent to his maker, it would spell for a larger arc for Aquagirl, who could definitely use the treatment. If her use of power in this installment is any indication, there is much to Aquagirl that's kept under the bushel, and while it would be ironic in that it takes a death for her character to come to full life, it would still be interesting to see how it's handled. However, the big draw of the issue was the appearance of what seems to be Wonder Woman on the last panel. That last statement isn't meant to be coy, but it's still too early to be more than hopeful, and crow has such an awful taste sometimes. Still, if it is Wonder Woman, how Gage portrays her would be very intriguing. Thrust into battle, we know that she'll be the no-nonsense warrior and speak with her sword more than a wee, but if Gage keeps her around and gives her more than that, readers might be treated to a "Trinity Beyond" storyline, and that would be uncut fun to read.

One thing that is quite pedestrian in this issue, is Brainiac's lack of creativity in this final battle, after showing such intellect and aplomb earlier on. He's opted for brute strength and putting all of his eggs in one basket. No long distance weapons, no sonics, force fields, etc.; just punch and pound and repeat. It's a flaccid treatment to say the least, after six issues where Brainiac has been one step ahead of the game, and there's really no excusing it. Brainiac upped his game, the JLB have risen to the occasion, such as that may be, but the last thing that should happen is a meltdown in thought on the part of Brainiac, and Gage by extension.

I'll say it until things change, JLB 2.0 is the best title featuring the Justice League on the market. They're actually in the book, they're fighting the bad guys and not themselves, and have a more compelling story in three months, than their counterparts have had in over a year. Pick it up, enjoy it, and return again.

Art - 4: Another solid issue, particular for the water beast that Aquagirl creates and that last panel where Wonder Woman(?) enters the picture.