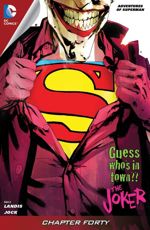 Click to enlarge
What is The Joker doing in Metropolis?

Has Batman beaten him one too many times?

Is he looking for a new challenge?

Just what is The Joker up to?

The Joker stands alone, high atop the Daily Planet building. Into the distance, there is a plume of thick, black smoke rising up from a Metropolis building. Helicopters circle the plume assessing the damage.

Of course, The Joker is responsible for this mayhem. Gotham's psychopath isn't in Metropolis just to see the sites. His goal is to create chaos and to attract the attention of Superman.

Mission accomplished; Superman confronts The Joker. But all Joker wants to do is tell jokes, and blow up more buildings. Why? No reason. The Joker's modus operandi is to be... insane. He has no demands or reasons for what he does. It just seems to be in his very nature to create chaos and instill terror in others. This brings a... grin... to Joker's face. These things make him happy.

As Superman and Joker converse, we find that The Joker is in the beginning of his career. He knows his acts are crazy. Or are they? Is he really a criminal? Green hair? White face? It's all so new to him.

How is Superman going to deal with this insane lunatic?

First, a complement. Yes, Superman tells Joker that he is... smart. Joker is stunned. That's not the response he is used to getting from the opposition team. However, Superman seems to understand that The Joker has layers, and he's smarter than he lets on.

Then, Superman insults Joker. He calls him 'vapid and dumb' and that he is trying too hard. Joker is thrown off his game by Superman's ping/ponging descriptions of his character. Joker shoots back an insult at Superman about wearing his underwear on the outside and wearing shirts that are too tight.

When Superman laughs at the villain's jokes, Joker is again shocked and confused. He is used to people responding to his insanity with sheer terror or, as with Batman, brooding silence. Superman doesn't seem too worried about those bombs Joker planted around Metropolis either. (Wonder why?)

None of Joker's usual tricks works to soften or scare the Man of Steel, so in frustration, Joker lays voice to all of Superman's critics. He calls Superman a boring, pajama wearing, un-cool, irrelevant superhero.

Superman listens, bored. He eggs Joker on by simply saying that he seems... well... 'mad.'

Story - 4: The Good: Landis has made Joker the 'voice' for all those Boy Scout haters. I love that Superman is amused by Joker's attempts to demean him. Supes is confident enough in himself that he doesn't need the approval of others, and is thus, unmoved by the stupidity of Joker's ascertations . All Superman needs is that internal conscience that tells him what is right and what is wrong. Joker's words bounce off him like a Super Bouncy Ball bounces off your mama's newly cleaned linoleum floor. And it shocks and annoys Joker.

Joker's statement about Supe's costume being more 'Jock than Goth' is very clever. Way to go in recognizing 'Jock' the artist.

The Bad: The comment Joker made about how, "...unpredictable when I'm on my period" is a very crude, Joker-like statement. However, I do consider Adventures of Superman to be a comic that younger kids can read without too many 'adult' innuendos and situations. The comment didn't insult me, but it made me wince for the kids who might be reading.

Art - 4: Jock's art has me curious. Why does he flash on past drawings and actors who have starred as The Joker? In this particular collage of 'Joker' art, Joker is telling Superman that he is still trying to figure out who he is as a villain. I like the collage. It's great 'fan-service', but I'm not sure I understand how they relate to the current story. All in all, the art is fabulous.

Cover Art - 5: How awesome is this cover!!! The Joker is ripping open his shirt to reveal Superman's Shield. It's shocking. It's intriguing. Superman and The Joker are going to face off! How exciting! Jock's cover tells us that this is not going to be the usual Superhero vs. Villain story.

I could not wait to read this story.