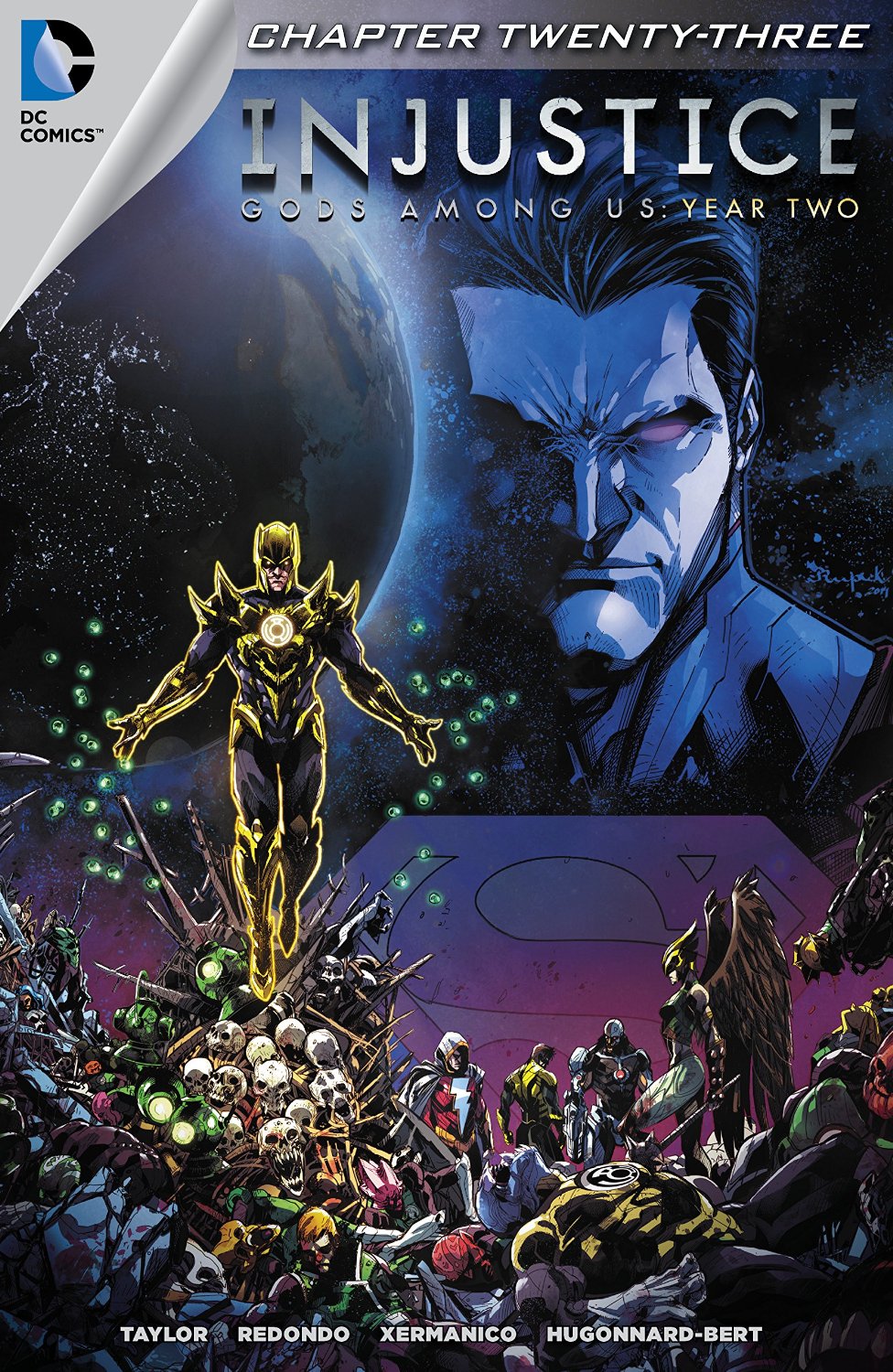 "Fall of the Gods"

Click to enlarge
Black Canary reveals to Regime Superman that she has transmitted her encounter with him via contact lenses with aforesaid capability. Canary's last breath is used to tell Regime that the world will fear him, and he takes to the skies. Regime finds Ganthet and lambasts him for the killing taking place, while adding to the number slain. Meanwhile, John Stewart implores for the opposing forces to stop fighting, drawing Sinestro's attention. Sinestro attempts to lure Stewart to his and Regime's side, but John is resistant, and so Sinestro murders him. Sinestro takes John's body to Hal Jordan, and places the blame for John's murder on the shoulders of Guy Gardner. Hal finds Guy and proceeds to beat him ferociously. Guy doesn't resist. He tries to reason with Hal, but to no avail, as Jordan rips off his arm and allows Guy's unprotected body to drop to his death as it meets the Earth below.

Story - 3: The events of last issue make this one a serious letdown, which, again, follows what happened in Year One, beat for beat. A triumphant moment for Regime Superman, followed by a lackluster issue that does its best to subtract the gains of the previous installment. Suspension of disbelief is very much necessary for fiction, and Injustice doesn't do well when it adds more challenges to that need. All ready we're dealing with a dysfunctional Justice League, Superman, Batman, etc., in addition to dysfunctional supporting players like Commissioner Gordon. The story needs to be strong enough so that readers believe the world that has been envisioned, and it doesn't track when events lack basic sense. Black Canary survived the exploding Batplane and everything with Regime, yet Regime's heat vision did her in? That can be accepted, but when she tells us that her contacts are still viable, it reeks of malarkey. It's tying off a plot thread that no longer makes sense. Canary says that everything she saw, the world saw. Did they also see her trying to kill Regime with a Kryptonite bullet? We know that Regime will find a way out or just plow right through Canary's last hope of revenge, but this makes it seem even more of a last gasp thrash of a drowning woman. The powers rings are supposed to be the most powerful weapons in the universe, yet they don't offer any protection from having one's finger pulled off, arm ripped off, of being stabbed. It seems so long as the other ring-wearer wants to kill, you, you're dead, which makes the battle between forces moot, unless you're Mogo. Lastly, why does anyone trust Sinestro? He's Sinestro!

If there has been one saving grace of this year, it's been the fall of Hal Jordan, which was much better depicted than that of Superman. Hal is overwhelmed by events, and just keeps making the wrong decision after decision. His allegiance to Regime Superman is worse than his fealty to the GLC. For all the light surrounding him, Hal just cannot see what is really going on, but that is the great dysfunctional world that is Injustice. This is what you receive when we request flawed heroes. That's correct, they're not heroes at all, not one of them. Contrary to popular belief, heroes and heroines aren't perfect. What they are is heroic. That heroism makes them capable of great service towards the people and the planet, but putting their own needs and foibles to the side. The Injustice players may have been heroes and heroines at one time, but there is something inherently off about them that has allowed this all to transpire. If Superman is the example for all superheroes, it should be no surprise that in a world where he is inherently flawed, all others follow in lock-step.

Art - 3: The last two issues have spoiled me for this one. Perhaps it's that the story doesn't call for dynamism, but this issue stands pat on its blandness.

Cover Art - 5: It's Sinestro's world and Regime knows it.