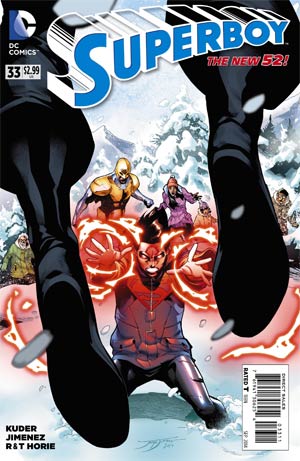 Click to enlarge
Leash and Hammersmith wake in the Alaskan snow having been thrown out of the N.O.W.H.E.R.E base. A Tachyon bubble now seals the base off from the world, Dr Grey points out the energy that has been causing Jon's illness is also tachyon based. As the STAR team race inside to help Jon they discover a room full of Superboys turning to face them.

Elsewhere, Jon has manifested himself as an eight year old child with a mass of baggage on his shoulder. The place is a new universe, after he touched the Superboy in the stasis tube it turns out the massive surge of tachyon energy, which powers the New 52 universe couldn't cope with it and thrust Jon out into a completely new pocket universe for him alone. A puzzled childlike Jon is met by a wiser more content Kon-El. When Kon was killed during the "Return to Krypton" he was made into a herald for the Oracle [See Teen Titans final issue]. When Jon travelled back to the present his body began generating a massive amount of energy and that acted like a magnet to Kon and he was unknowingly absorbed by Kon's mind, trapped inside, manifesting as a phantom. That same energy drew him to the Jon in stasis, but the three of them are inside the one body - a mass of temporal tachyon energy but only one can survive.

Back in the New 52 Universe the Superboys from alternate times and spaces are fighting one another, the now dual Superboy of good Kon and good Jon take charge and use their newly found universe-altering powers to merge their friends from all timelines into their ultimate manifestations. Peter becomes the ultimate technological man, The Guardian, the peak of his existence, Rose into the ultimate Ravager, Niti a powerful Green Lantern. The two soldiers that accompanied them are just about to receive the same merger when the evil Jon tutored by Harvest seizes control.

The three bodies begin separating in an explosion of energy as the STAR team watch in horror.

Dust settles and the team find an unconscious Jon and Kon in the rubble but some evil laughter fills the air and the evil Jon now reenergized, swears to kill them all.

The title has truly found its feet and is delivering an energetic, story that, while obviously a huge band aid fixing a catalogue of errors, has really grown into its own.

I hate that this is almost the end of the journey. In one respect I feel happy that the book is finally in the hands of someone that can deliver a fantastical story and can take your breath away with its unexpected twists... but in another I wish this was in 2011 when the title began. If it were I feel sure it would have been one of the New 52's best books. I feel like someone dropped the baton here in the higher editorial levels and so, in another respect, I feel angry that we the readers endured some of the worst Superboy stories ever told to get to this point. It is testament to a good writer that they can grab the concepts and elements that floundered and pull them together into something special.

Art - 5: Bursting with energy just like the script. Every page is better than the last.

The appearance of Bizarro Superboy and adult Kon-El/Jon Lane Kent were both highlights. The Superboys fighting is something I would have liked to see more of. I can only hope Jorge Jimenez has some more in store for us for the finale! The mix of the anime style with the serious traditional style doesn't feel out of place at all. Case in point...the last page with Evil Jon looks spectacular! I will definitely be following his art in future projects.

Cover Art - 4: The cover this issue is a bit of a let down. It just isn't as powerful as it could be considering the splashes inside.

That final page would have made a fantastic front cover.