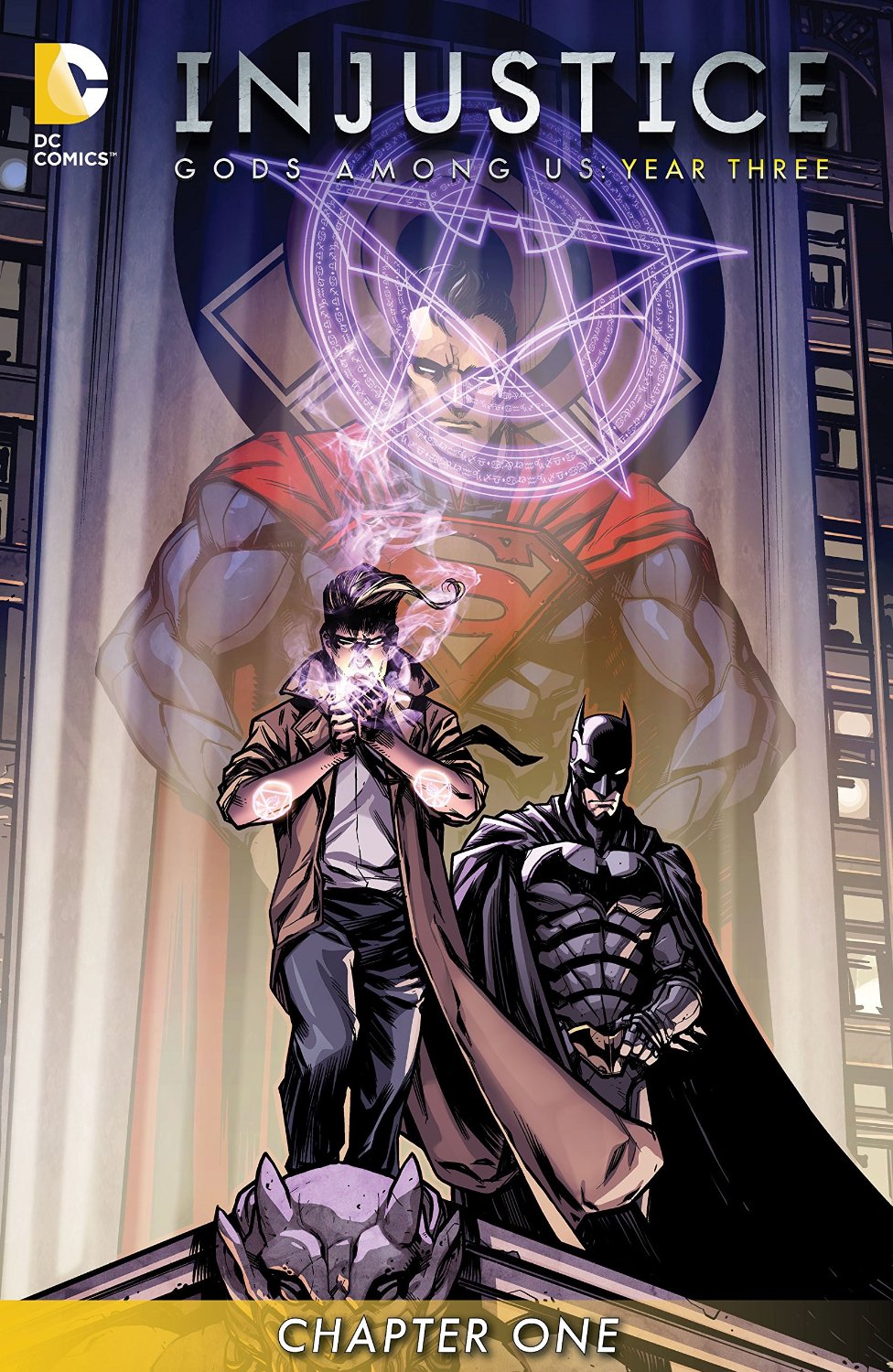 Click to enlarge
In Liverpool, England, John Constantine looks over the damage caused by the war between Regime Superman and the Green Lantern Corp. He goes to retrieve his daughter, Rose, who does not know that she is his own. Constantine takes her to the Tower of Fate, in an effort to keep Rose safe. In a conversation with Zatanna and Doctor Fate, Constantine alerts them that an evil magical presence was observing him. Doctor Fate adds that the presence has risen to aid Regime Superman. Fate also senses that they are on the path to much pain and suffering (duh!). Constantine decides that he needs help and asks Zatanna to send him to the greatest detective in the world. Zatanna gives a mild protest, but acquiesces to Constantine, who is sent to see none other that Detective Chimp.

Story - 3: "Gathered together from the far reaches of the cosmos, are the most dysfunctional heroes ever assembled."

"Injustice: Year Two" closed on a relatively strong note, aside from the malarkey with Black Canary and Green Arrow. The opening here is quite a lackluster way to begin, as it introduces Constantine as a major character, with no connection or pinhole into what's happening with the rest of the players whom we left not so long ago. Constantine, as a character, can take up a lot of room on his own, as this issue shows, so only time will tell as to how well he's used in Injustice. Zatanna and Doctor Fate come across as completely ineffectual, and that is a problem. Constantine just showing up at the Tower of Fate may seem cool, but it shouldn't be happening with the power at Fate's disposal, and Zatanna there with him. The cliché of "that's impossible" works best when it's been shown just how impossible it is. The reader isn't given that sort of lead-time, just a grinning Constantine and you should accept it because he's cool and popular right now. Fate being decked out in his raiment is one thing, but why is Zatanna in a top hat and fishnets, when she's not in battle, in fact, she's hiding at the Tower?

One of the most insightful comments I read about Injustice, was that the reader wanted to see where it goes, see what happens next. That's pretty much the appeal of this quarterly-entertaining serial, about the most dysfunctional version of DC's legendary heroes that I've come across. That and the shock, awe, violence, irreverence, and everything else that super hero comics need to do to attract that elusive audience who doesn't like super hero comics. Now, of course, we know where the story is going, and why it's going there. We even know when it's going to happen, what's going to happen, and why. That leaves how. How is totally dependent on the execution of the events, the characterisation, conveyance of the theme, etc. In short, can an obvious story be crafted so that it is a good or excellent one? So far the answer has been squarely in the negative, as Taylor serves up meatball after meatball over the plate, so fanboys can hit a self-congratulatory dinger. However, as this Year is about magic (Trigon, fool!) perhaps we'll get some rabbits out of the olde hat, and a great Year to boot.

Art - 4: Bruno is back and actually does a good turn, as outfits aren't called for most of this story.