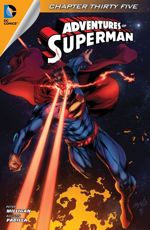 Previously, we left Clark Kent talking on the phone with a very offended Lois Lane. Our intrepid reporter was not interested in reporting on the First Lady's 'old frocks'. She was interested in a one on one interview with The Demolisher.

Ironic... considering she was actually talking to the man...

But Clark knows that his third persona, The Demolisher, is too brutal. He tells himself that it ends tonight. He knows that the 'Punisher-like' methods are wrong.

He tells Lois to go to bed.

And five minutes later, he's off again. All that bent-up frustration and helplessness Superman has been feeling was now coming forth.

Metropolis is The Demolisher's city now.

As he flies through the night, The Demolisher's super-hearing picks up Lois Lane's frightened voice. The Demolisher, not only saves Lois from a couple of thugs, but plants a big ole kiss on her.

And even though she is affected by the kiss, she is also a little alarmed by The Demolisher's violent methods. Her article printed in The Daily Planet the next day tells of a night filled with violence and bloodshed - all caused by The Demolisher.

Can The Demolisher save the city he, himself put into darkness?

Is there no way back for Superman?

Story - 4: The Good: Superman is obviously in the beginning of his Superhero career. He's young, unsure and frustrated. We have all felt that way. It's a very relatable situation. Superman so badly wants to do good, but he is often ridiculed for his honorable ways - not only by the bad guys, but by the very citizens he is trying to protect.

Just like a policemen's job is, Superman's job is often frustrating and thankless. As policemen and superheroes must do, they must find healthy coping mechanisms to deal with the emotional stress of doing their respective jobs.

In a way, this story is dealing with that situation. Right now, Superman's dark side is winning out. He is letting his frustrations control him. After all, it feels good to take on the bad guys and give them what they deserve.

However, in part two of this series, it is made clear, that the line is beginning to blur on who is bad and who is simply ungrateful.

And now that all the truly bad guys have been run out of town, The Demolisher has to find new purpose. So, he has to create the chaos. It is soooo un-Supermanlike.

I love it! Can't wait to see the third installment.

The Bad: I didn't find any bad in this story. Can't wait to see what happens next.

Art - 3: I like how the Demolisher looks. He's bad, but he's hot. The last page is epic. The Demolisher shadowed in the wake of the circling fire ball behind him.