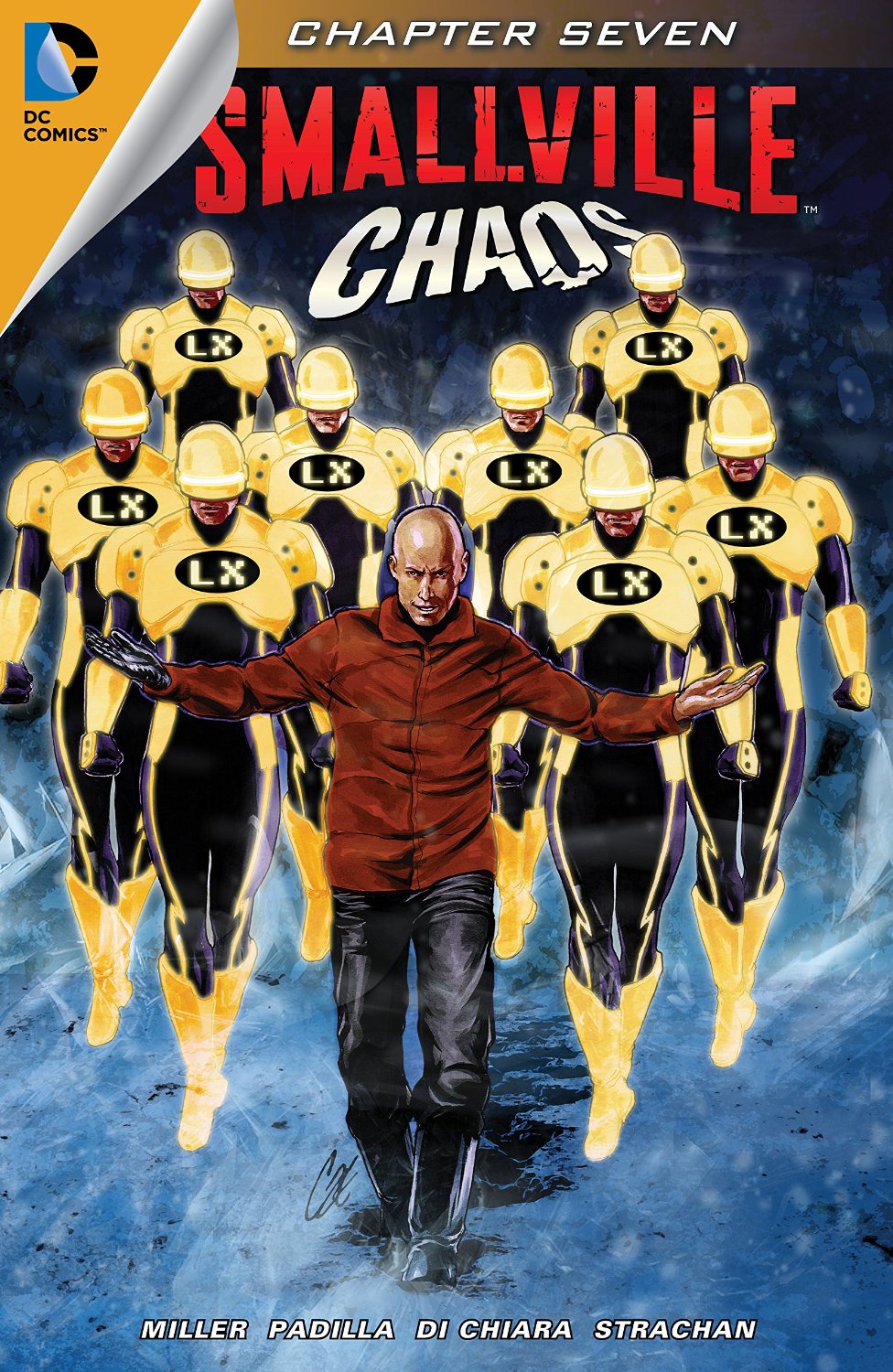 Click to enlarge
Our story opens on Earth-Omega, with Superman and the Jor-El of Earth-Majestic delivering some exposition. According to Jor-El, Kryptonians sought to travel the stars, making use of wormhole technology, and stumbled on evidence of parallel worlds. Specifically, they discovered the Bleed, but they couldn't study it or explore it because everything it came in contact with was destroyed. Unfortunately, Superman notes, the Monitors cannot only travel through the Bleed, they can wield it as a weapon, which they've been doing to destroy countless parallel universes. However, Earth-Omega wasn't destroyed by the Monitors; it was destroyed by something else.

Lois allows herself a moment of depression. Seeing the devastation of these worlds, she says, is almost too much. Superman hears a faint sound, and they set out in search of its source.

Meanwhile, back on our earth, a Mephisto-possessed person wreaks havoc on a passenger plane headed for Tokyo. Digital Tess monitors its descent but warns other heroes to stay away from the city in order to prevent them from being possessed by the entity. However, there are still a few heroes left in town. Superboy rescues a family from a group of attacking Mephistos, and Supergirl catches the aforementioned falling plane.

On Earth-Omega, Superman discovers the source of the noise he heard. A dark figure calls to him from the rubble, saying on his earth, Superman was known as Clark Kent. When Superman asks the figure how he know this, the figure turns and says "Darkseid never forgets a face."

Story - 4: The Mephistos are starting to risk becoming silly. Every infected person is constantly muttering to him or herself about being "his wrath." Some people even outright scream it. And yet, they still manage to practically sneak up on people. Take the gentleman on this issue's plane. When we first see him, he's muttering the same phrase over and over, disturbing everyone around him. Did no one notice this oddball muttering to himself when he got on the plane? Assuming this plane left Metropolis, was no one aware that people muttering to themselves were attacking everything in sight? Or let's assume this fellow kept quiet until now. Why would he start muttering to himself in order for people to notice before attacking? Wouldn't it be more effective to just start killing people?

It's a moment of weak storytelling, honestly. However, it's a small part of this issue, and considering how much I enjoyed everything around it, I'm willing to forgive it. For now. Next issue might be different...

The Mephisto-angle aside, this story just continues to build upon itself and become bigger and bigger. Miller is going full throttle with this story, which completely embraces its over-the-topness. (Yes, I'm making that a word.) Anything can happen, and anyone can show up. It's a wonderful ride. Here's hoping it continues.

I suspect I'll be sad when it ends. It's going to be a tough act to follow.

Art - 4: The artwork continues to be energetic and full of motion. With the exception of Superman's conversation with Jor-El, no one stands still in this issue - at least, not for very long.

Cover Art - 3: Lex is leading his Yellow Lanterns into battle. Is it just me, or do they look like an army of Robocop/Judge Dredd hybrids? They didn't appear in this issue, but I suspect they will later. Regardless, it's another slightly weak image. As good as "Chaos" has been as a story, the cover art hasn't been as impressive. Where previous series like Lantern enjoyed extremely detailed images, these seem rushed by comparison.