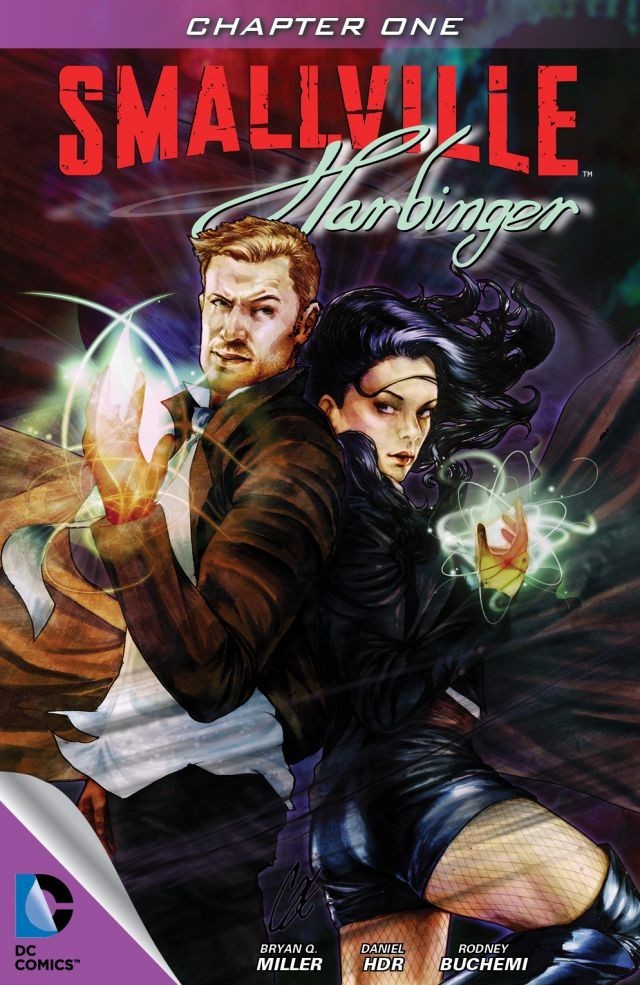 Click to enlarge
Diana (that'd be Wonder Woman) contacts Tess in search of a prospect with magical powers. Tess says she knows just the person for the job, which leads us to a nightclub in London.

Zatanna performs for a roomful of people probably drinking a little too much. After a heckler calls her a phony, she admits her tricks are fake. Then, she mutters a spell and makes the heckler float for the audience's delight. (Seems a bit more work than necessary.)

Two encores later, we're told, Zatanna exits through a back entrance into an alley where a mysterious wizard attacks her. She puts up a decent fight, but the newcomer gains the upper hand. Just as he's about to damn her to "frozen fields and all that is lower," someone interferes and knocks him out.

The interloper then introduces himself as Johnny. Which, of course, we know means John Constantine.

Story - 4: With the exception of Valkyrie (it's like Lana Lang can't work in Smallville anymore, no matter what medium), I've enjoyed these side stories. If this first chapter is any indication, Harbinger will be no different.

Zatanna's handling of the heckler was amusing, but it seems strange she went to the trouble of a fake show at all. She clearly doesn't mind showing her powers, so why not just use them to make someone float to begin with? Why the effort with cables if she's all too wiling to cut them and show some real spells? Or maybe the heckler was paid off like those so-called "stunt grannies" at old wrestling shows.

This was mostly just an introduction, seeing what Zatanna's been up to since we last saw her and meeting Constantine for the first time. My ragging on Zatanna's show aside, it was a fun introduction. One thing Smallville has always delivered on is fun. Even the weaker stories manage to be fun rides. (Except maybe Valkyrie. My gosh, that was awful.)

The only problem is now I'm torn between wanting to read the next chapter of Harbinger just as much as Alien. You are a cruel one, Bryan...

Art - 4: The art was definitely good, very effective and dynamic.

I'm not going to knock my rating down over it, but I wish Zatanna looked more like her television counterpart. Serinda Swan had a bit of a square jaw, and here our heroine has the traditional feminine narrow jaw. In fact, she almost looks like previous versions of Wonder Woman in fishnets.

Criticism aside, I can appreciate and understand the difficulty in drawing her exactly as she appeared on TV. I'm just being picky. Thus, it still gets a 4.

Cover Art - 4: It's not groundbreaking and it doesn't grab me by the eye sockets, but it's a good image that effectively illustrates what's inside. Even if it wasn't really until the last page.

It does give us something different, though. Past covers have all given us human characters and super-powered heroes showcasing their respective talents. This is the first to portray magical powers.