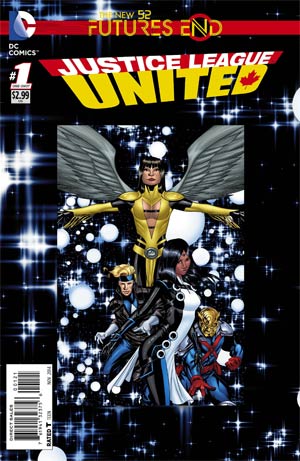 Click to enlarge
FIVE YEARS LATER... This story begins with Equinox stopping Polargeist from attacking a trucker and immediately after receiving a telepathic message from Martian Manhunter telling her that "they're free". Equinox decides to go gather up anyone from her old Justice League United team to go to Mars and help save J'onn, and thus arrives at Buddy Baker's, formerly Animal Man, house to ask for help. Although he can't help, he sends her to find the Justice League at their Fortress of Justice in New Mexico. Greeted by Cyborg and Vostok, she briefs the rest of the team The Flash, Dawnstar, and Stormguard on her telepathic message from J'onn that the prison they had on Mars has been compromised. The League decides to go investigate.

Upon arriving on Mars, Martian Manhunter reaches out to Equinox once again and is about to reveal who started the revolt, that is until he's cut off and a few super villains arrive to attack the League, wanting to get off the planet. Stormguard and Equinox penetrate the prison seeing that the cells have been broken from the outside in. Once they get to J'onn, they see that Grodd is holding him captive, revealing that he didn't break everyone out, Captain Atom did.

Story - 4: With an event as big as Future's End, I was kind of hoping to get more than we got from a Justice League book, both in terms of the League itself and the story. That being said, it's mentioned in the book that Batman, Superman, Wonder Woman, Wildfire of the Legion of Superheroes, and Arsenal are all members of the League as well, though we don't get to see them work with this future team. Instead, we get Cyborg; the new leader of the League, The Flash, Vostok of Aquaman's Others, the new Stormguard, and Dawnstar from the Legion of Superheroes. Albeit an odd bunch, I quite enjoyed their little adventure here in this book. As someone who has only read the first two issues of Future's End at this point, I'm not sure if I missed a lot, I'm sure I did, but I still really enjoyed this story. On another note, I was glad to see the Justice League finally care about Martian Manhunter in the New 52... That was nice!

Come back, or just go back to the homepage and find it there, soon to read my review of the concluding chapter of "Homeworld" with Justice League: Future's End #1!

Cover Art - 5: I really liked the cover. 3D covers don't usually do a whole lot for me, but I thought it was neat to see the current Justice League United team vs the Justice League team that appears here in this book, or at least a few of them.