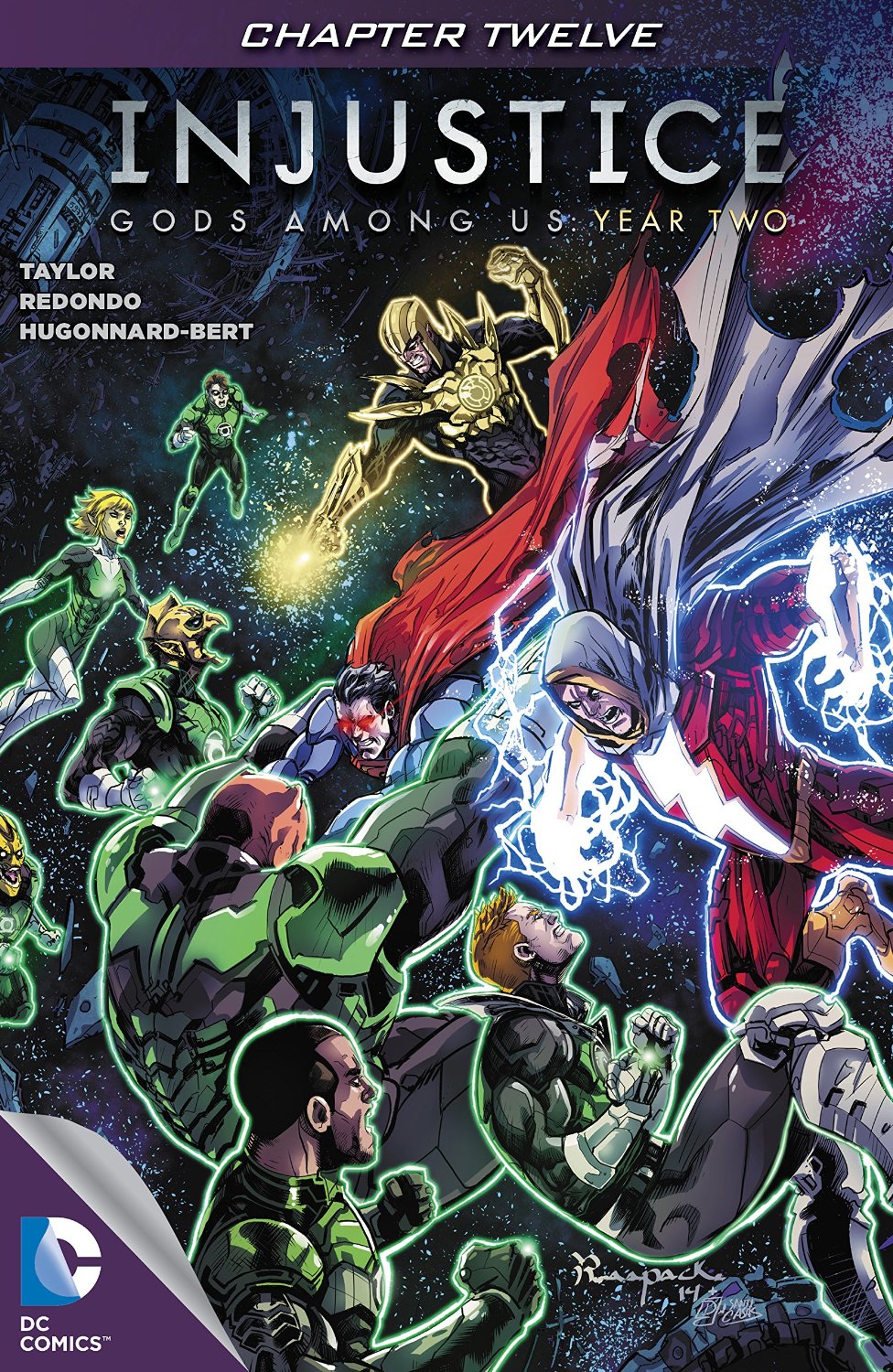 Click to enlarge
The Green Lantern Corps led by Killowog has been defeated, and now await the judgement of Regime Superman and the Justice League. Ultimately, Regime Superman decides not to execute the GLC, but confiscate their rings and detain them. Sinestro disagrees, warning Regime that to do so would be inviting war, but Regime dismisses the Yellow Lantern Corps nonetheless. Sinestro, however, is asked to remain. Guy Gardner observes the YLC leaving Earth, and goes to alert the Guardians of the Universe that Regime Superman is in league with Sinestro. In Gotham City, Commissioner Gordon convenes with a group of GCPD officers, and convinces them to take a stand against the militia that Regime Superman left in place. Commissioner Gordon has Harvey Bullock shoot him in the head, after he consumes a super-pill. The group is astounded to see that Gordon is alive and smiling afterwards. Gordon calls it a game changer and the issue closes on his wry smile.

Story - 2: There was a great panel in NYC that this reviewer was privileged to take part in recently. It introduced a discussion on the trend of inverting characters from one position to another i.e. changing a hero to a villain and vice versa. Marvel's work with Norman Osborn was a template of sorts for the villain becoming the hero, one that has now been applied to Lex Luthor, and the Superior Spider-Man works for any hero who is swung to the opposite end of the pendulum. The overarching question, of course, is why. Why do inversions of the heroes appeal to comic readers, and why can't heroes do what their twisted counterparts do? The reason is found on a few fronts, the foremost among them being that comic readers in general have seen most of what's coming at them these days, and it's unimaginative in its lack of originality. New heroes aren't created, instead, readers are given 12 different Batman books to choose from. Batman, who embraced antihero status some time ago, allow writers to write a complex and realistic character, based on the fact that his morality is fluid in comparison to other DC Comics heroes. Most of the DC superheroes cannot follow Batman's lead, but Injustice solves that pesky problem two-fold: 1) It's an alternative universe where things can be different. 2) The most moral of their lot loses his core by issue 4.

Regime Superman murdering the Joker, allows Superman to be the complex and realistic character that fans want, and the sales of Injustice are proof positive of this. A Superman who will kill, lie, cheat, steal, etc., and all the other negative things that we would never expect or tolerate of the canonical Superman (at least not yet), allows for readers, particularly longtime readers, to have what they seem to crave more than good characterization and solid storytelling: the same old thing, but different. Same outfit, name, look, etc., but lacking the core that makes up the character, and therefore different, and that difference sells well. It would be thought an obvious move would be for DC to create new characters of this ilk, but they won't sell like a Superman who kills, and a Justice League out-of-whack. Instead, DC caters to this particular fan desire, and ignores the ones that would result in greater craftsmanship.

This installment of Injustice wasn't good, but Injustice hasn't had a good issue in weeks. Entertaining, yes, but good hasn't happened in some time. However, when read closely, the appeal of the book is obvious: it's the DC superheroes, but they're edgy and fresh because they're fighting each other, and willing to kill. They'll work with villains and are morally bereft, and it's entertaining as the canonical heroes have been mired in a rote story telling that they can't escape from, as they need to sell before they can entertain. The great disconnection is that somehow having Superman and the rest written as such won't run to ground faster than having them written as themselves. Tales involving heroism are harder, and perhaps less complex and realistic, but such stories were the basis of 75 years of history. Injustice has run out of petrol after a year, but readers are hungry enough for something, not necessarily good, but different, that the exhaust will be enough for the foreseeable future.

Regardless of my perspective, Injustice will continue to sell to a readership that is growing steadily older, and wants entertainment and is looking everywhere but to superheroes for it. What is more, they want to see the entertainment value of The Walking Dead and Crossed embedded in a sub-genre that was never made or meant to manage such a thing. 10 years ago, Injustice wouldn't have been a best selling Elseworlds. 10 years later, readers are bored and writers are at a loss, but DC has to sell. A shame what has become of it wares.