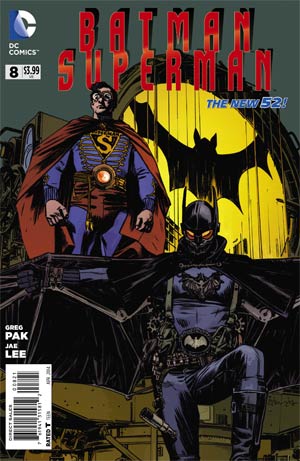 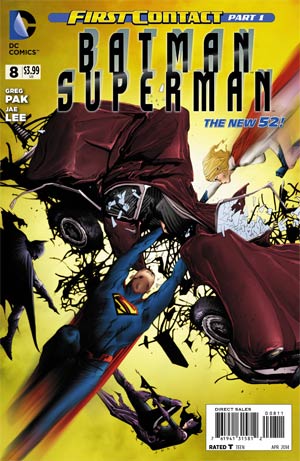 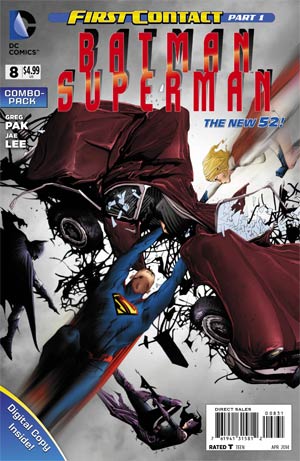 After the events of last month's World's Finest #19, Huntress convinces Batman that she is who she claims to be, his daughter from a parallel world. Batman and Huntress rush to help Power Girl, who has lost control of her powers. Superman swoops in to help save the day as he helps Power Girl control her powers by taking her to the middle of the Pacific Ocean.

Elsewhere, Batman and Huntress track down the flow of energy that was messing with Power Girl's powers to a man named Kaizen Gamorra. Disguised as Bruce Wayne and Helena Kyle, they infiltrate one of his presidential ball's. Huntress finds out the plans for Power Girl to detonate and as Batman warns Superman, Power Girl flies towards space so that she won't hurt anyone else. Superman follows to try and save her and instead absorbs the same energy that she was detonating.

Story - 4: Ever since I heard about the crossover between Batman/Superman and World's Finest, I have been very excited to start reading. Although I didn't review World's Finest #19 (the Prelude to "First Contact") I will tell you that I enjoyed it very much and it's definitely worth a read for those who are jumping on to Huntress and Power Girl's story here in this issue for the first time.

As most of you know, I wasn't too thrilled with the last Batman/Superman arc, which to me was pretty generic. This arc however seems promising as it's going to shape what is to come in both Batman/Superman AND World's Finest. "First Contact" also seems to pay off the first arc of Batman/Superman in which they met their Earth-2 counterparts.

I liked Superman's characterization in this issue a lot better than in the last arc as a whole. Instead of making Superman into some punk kid, Batman does criticize his impulsiveness, but it's made clear throughout the issue that Superman is indeed a hero. This is made apparent when he saved Power Girl, twice in this issue, without any regard or care to what might happen to himself if he did. That's what makes Superman for me and in saying that, I really loved this issue for that reason.

I also liked Batman in this issue as well, especially his inner monologues. I think Batman meeting someone like his daughter (albeit from a parallel world), especially just after the death of his son, is something that the character needs right now and I think is something that will help him to possibly trust Superman a little bit more as this arc and title goes on.

Huntress and Power Girl were also extremely likable in this book, at least in my opinion, as they are thrust into this story while still feeling like they belong. Personally, I really enjoyed Huntress's explanation of who she and Power Girl were on their earth (Robin and Supergirl) and how they came to be here on Earth Prime. I also loved how she got out of Batman's trap as well as her knowledge of his computer and vehicles.

On another level, I feel really bad for Huntress here. I feel bad for Power Girl as well, but Huntress more because she's literally working with her father (whom she saw die five years earlier) and she cannot express any emotion or feelings to him because he's not the same man who raised her. I couldn't even fathom having to go through something like that. This is one instance where I'm extremely glad to be able to say, "It's only a comic book, this isn't real."

Overall, I really enjoyed this issue of Batman/Superman, I think Pak did a great job and I hope he continues to make this title more and more interesting.

Art - 3: Honestly, I'm not the biggest fan of Jae Lee's artwork. I don't think he's necessarily bad and I certainly have nothing against him, but he just doesn't do anything for me. I'd say it's about average.

Cover Art - 3: I like the layout of the cover and the concept is really neat, but I'm just not digging Lee's style.

Solicited Cover Art - 5: I love Kenneth Rocafort's artwork. Now I don't think they actually printed this cover, but it was what was solicited and what kept appearing online, so I'm including it in my review because I love it!