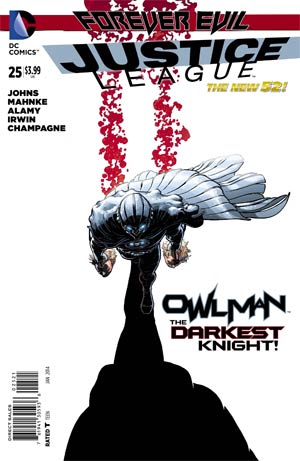 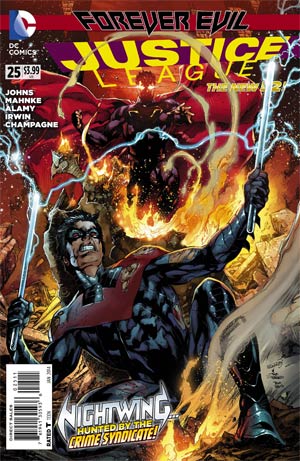 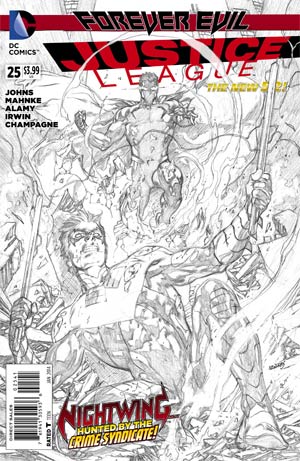 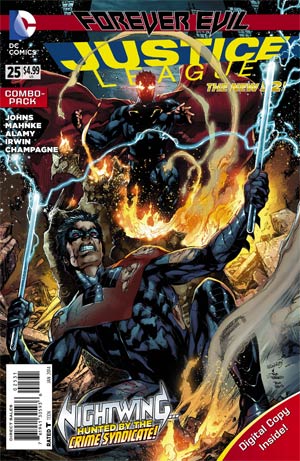 Beginning 30 years ago on Earth 3, we start in Gotham City. Thomas and Martha Wayne just took their sons, Thomas and Bruce, out to a movie. On the way to their car, Bruce and Thomas pull a gun on their parents telling them that they're not going to sit around and watch them waste their inheritance any longer. Bruce decides that he cannot hurt his parents and fights his brother. Alfred, the Outsider, shoots Thomas, Martha, and Bruce dead and Thomas sees an owl in the sky, his new totem.

Back in present time, our Earth, in Chicago, Eel O'Brian waits for his boss to finish kissing up to the Syndicate when from above Owlman appears and takes out all of the mobsters. Eel ends up getting shot as a tank of chemicals fall on top of him, stretching and contorting his body into something not completely human. Owlman does however manage to recruit a man named Bertinelli to his cause.

Later, at the Syndicate's base, Owlman tells Grid to turn off all security cameras as he is going to have a chat with Nightwing. Owlman reveals through inner-monologue that he was the one who killed Earth 3 Dick Grayson's family. In Nightwing's "cell," Owlman reveals to Nightwing that although the Crime Syndicate may want one thing, he wants another. Just then, Nightwing breaks free and the two fight. Owlman tells him that here on New Earth, Ultraman, for the first time, is weak and because of that, Owlman, with Nightwing's help, can take Earth back and defeat Ultraman and the Syndicate once-and-for all. We see at the end that Superwoman was listening in the entire time.

Story - 4: I could have easily given this story, like Ultraman's spotlight last issue, a 5/5. Easily. However, as you can see, I did not. Here's why: the cover promotes one thing when the content in the actual issue is clearly something else.

Now, when I say the cover, I mean the regular cover with Ultraman and Nightwing (Ultraman isn't even in the book), NOT the variant cover featuring Owlman, which should have been the main cover from the beginning. When I picked this book up, I expected to see a Nightwing/Ultraman battle and I was very excited for it, until I read the issue. And before someone says, "You gave this a 4 because of the cover?", the short answer is yes, but the real answer is no. Like I said above, I gave this story a 4/5 because we were told we were getting one thing (through the cover and the initial issue description) and we got something totally different.

However, don't let my initial disappointment or negativity detract you from wanting to read this story or enjoying it, because I clearly gave it a 4/5 as you can see above.

This story was a fantastic follow-up to last month's spotlight on Ultraman as this issue is a spotlight on Owlman, who clearly just needs a friend.

I really liked Owlman's origin here in this issue because I think it just adds to our levels of hatred for this character, while at the same time we're reading about him through his eyes which also makes us appreciate and dare I say "enjoy" him. If you enjoyed Justice League: Crisis on Two-Earths, not only is all of Forever Evil for you, but this issue especially would be one you might want to pick up!

I also really enjoy how Geoff Johns is taking a lovable character like Alfred Pennyworth, and turning him into something ugly and psychotic, which is literally the exact opposite of who Alfred is. Earth 3 Alfred definitely earns his title as "the Outsider".

I thought the way Nightwing was portrayed as someone who has lost everything yet is still fighting for what he knows is right was fantastic. I've always liked Dick Grayson (what is with DC and trying to call him "Richard" all the time now? I know it's his real name, but seriously?) AKA Nightwing and have always seen him as the straightest arrow in the DC Universe. Even Johns somewhat alluded to this in Infinite Crisis.

Also, as someone who really enjoyed the 1990's JLA comic, and really just 90's comics in general (I know I'm a minority there), I was happy to see Plastic Man, or at least his origin, in the New 52. He was one of those characters that I had no clue where they stood, and I'm glad that out of something like Forever Evil we can see new heroes rise, even with the Justice League(s) "dead".

Over-all, this issue was great! Really enjoying the individual Crime Syndicate member's spotlights and I hope to see Superwoman, Power Ring, and Johnny Quick's origins sooner-than-later as I think it's great that we finally get to understand WHY these warped versions of the Justice League are the way they are.

Very simply actually, I just did! ;) In all seriousness, this cover is extremely well done and Ivan Reis is definitely one of the top artistic talents at DC right now, right alongside Jim Lee, Greg Capullo, and Tony S. Daniel. There are a lot of others, but those were the first three to come to mind. Great cover!

Cover Art - 4: This one, again by Aaron Kuder but this time with Brad Anderson, was also a solid cover. Unlike the Ultraman one last month (or almost two months ago now), which I liked but didn't love, I pretty much loved this cover. It should have definitely been the main cover for this issue with the Ivan Reis cover as the variant. My only issue with it is that it's a little too graphic for my tastes as Owlman is holding the heads of his dead parents with a trail of blood behind him. Again, I like the concept, but it almost works "too well".