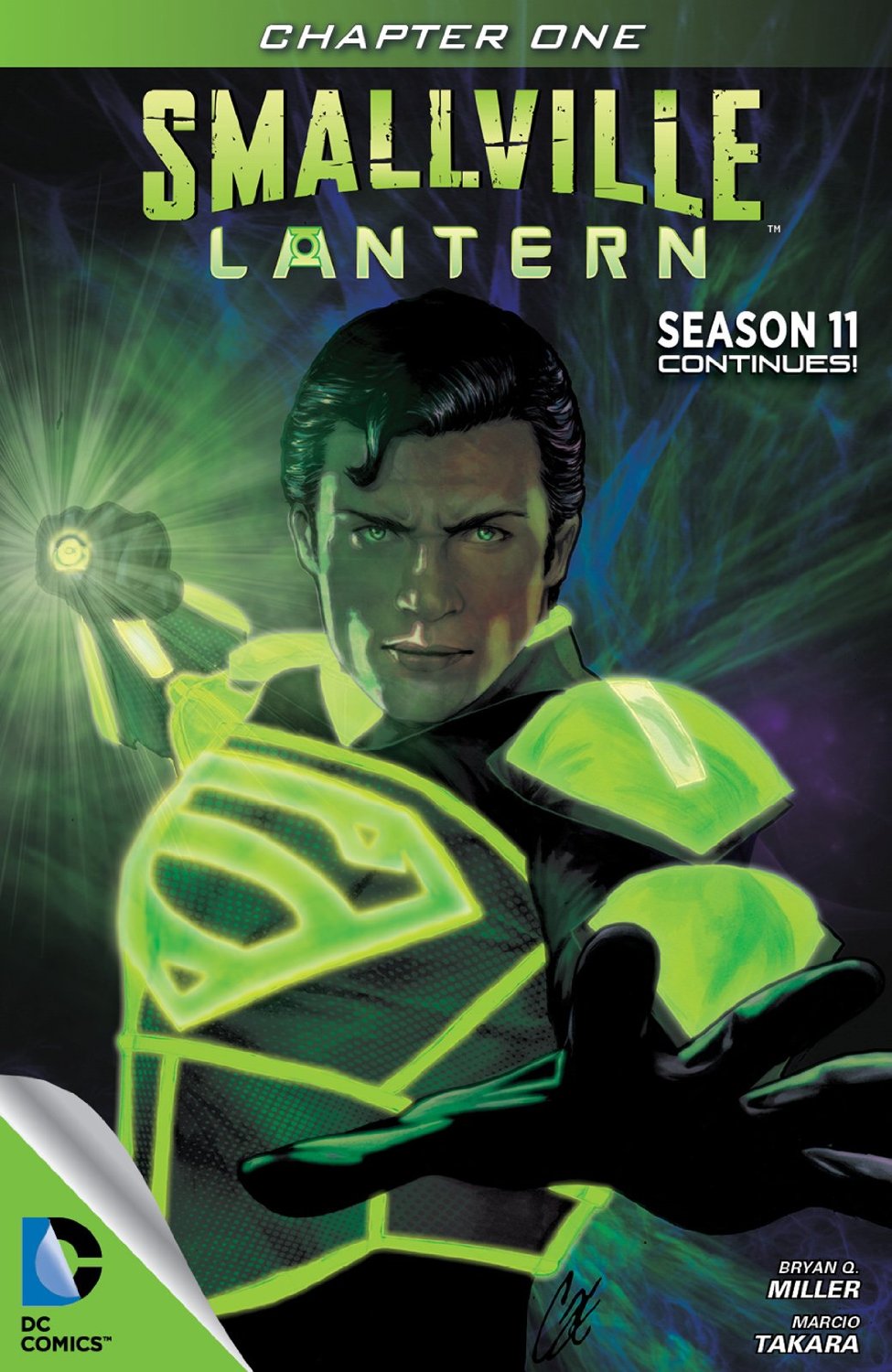 Click to enlarge
Our story begins where Season 9 ended, with Clark confronting Zod atop a skyscraper in Metropolis. After Zod's banishment to the Argo Colony with the other Kandorians, a green light soars over the surviving clones. As it happens, the light is actually a Green Lantern ring, which, upon detecting Kryptonian life forms returning to its sector, begins its search for a suitable ring bearer. Unfortunately, the Kandorians are clones, and therefore unsuitable. So it begins searching elsewhere.

In present day Metropolis, Oliver and Chloe bring us up to date on current events by discussing their perspectives on their situation. Ollie wants to see action again, but Chloe wants to make sure their child doesn't become an orphan.

Meanwhile, Lois and Clark have just finished watching The Avengers and are discussing the impact of Agent Colsen's death. (Okay, it's actually called Warrior Angels: United, but the dialogue makes it pretty obvious.) Clark is still worried about previous events (see: Alien), but Lois wants him to relax and enjoy one of their few quiet moments together.

Naturally, that's when something happens. The Green Lantern ring descends on the street, and Clark is barely able to toss Lois onto a conveniently placed couch before he's claimed as a new ring bearer and member of the Green Lantern Corps.

Story - 4: I'm sure after nearly eighty years of stories someone else has done one with Superman joining the Green Lantern Corps, but I haven't read it yet. So this is a new concept for me. The ring considering cloned Kryptonians unsuitable seems a little convenient, but I'm willing to let it pass. Along with that nicely positioned street couch. (It's Smallville. You have to do that sort of thing once in a while.) I'm eager to see this universe's version of the Corps and how Kal-El will interact with them, and ultimately, leave them. After all, he can't be Superman and the Green Lantern.

In terms of plot, very little happened in this issue. But what did happen is pretty big. Clark is currently Earth's Green Lantern. And Superman. If this sort of thing were to happen in the mainline comics, it would no doubt be some epic crossover event.

This issue was all about the setup. The fun can begin with future issues. Stay tuned...

Art - 3: I hate criticizing art, but I just don't care for this artwork very much. It's more than serviceable, not so bad that I'm giving it a 2, but it's just not up to par with previous work we've seen.

A lot of detail is sacrificed. In its place, we have...well, not much of anything. There's not really anything wrong with that per se. I just prefer artwork with a bit more detail.

The fact that this also feels very much like Manga to me doesn't help. I have an unhealthy bias against that style thanks to some college friends who force-fed me endless cartoons and comics insisting I'd like it. I didn't, and their efforts only made me hate it more.

That could make this a long twelve weeks.

Cover Art - 3: When did becoming a Green Lantern make you look like a Tron character? Sure, it looks decent, and it's nice seeing Tom Welling's face as Superman (complete with spit curl).

But seriously, I half expected to see someone inside this issue saying, "That's Kal-El! He fights for the users!"