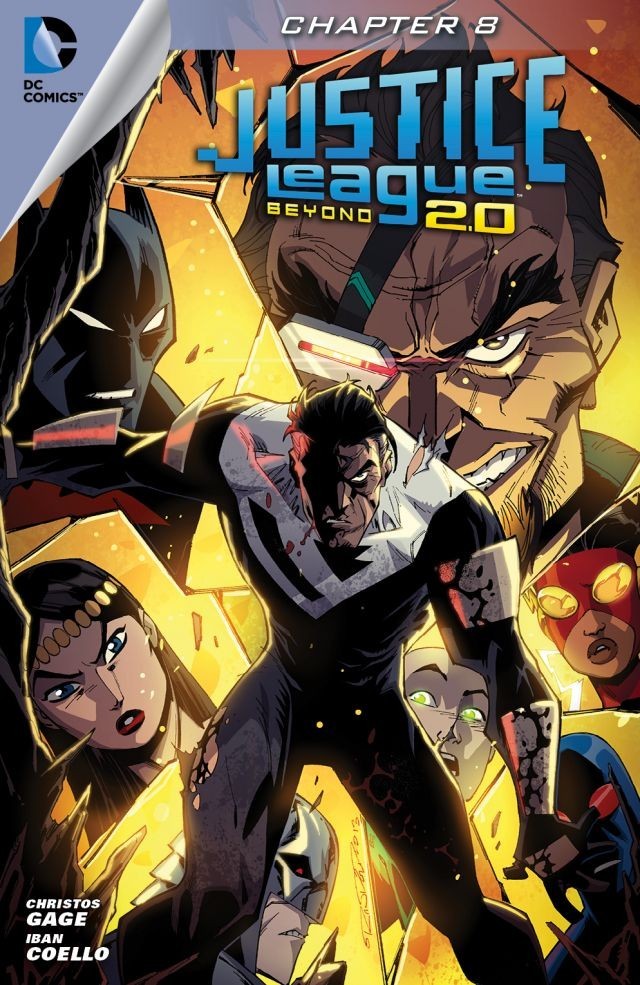 Click to enlarge
The Justice League Beyond has come to Superman's aid, but they are without the benefit of their super abilities to do so. Jax-Ur taunts the JLB, letting them know that they will be facing the deadliest women and men that were once on the planet Krypton. The JLB takes the threat in stride, and proceed to dismantle the Phantom Zone criminals, as they display their training, discipline, and resolve, until Jax-Ur's comrades abandon him, believing that there is no future in continuing. Defeated, Jax-Ur can look on while Superman offers Jax-Ur's son freedom from the Phantom Zone, and an escape from his abusive father.

Jax-Ur's son accepts and Jax-Ur pronounces his son dead to him. On exiting the Phantom Zone, the JLB welcomes Jax-Ur's son, with Superman going so far as to say he believes the world might be ready for a "Superboy". Jax-Ur speaks to an unseen figure, who cautions Jax-Ur to have patience and see their plan through. The figure is none other than Brainiac, who tells Jax-Ur that once he has what he wants, the Earth will be Jax-Ur's, at least what is left of it. Superman finally gets around to asking Jax-Ur's son his name. When he answers "Zod", all Superman can do is look on with surprise, while the rest of the League surrounds Zod with unknowing smiling faces.

Story - 4: The issue could have been a five, but as enjoyable as this storyline has been, it still cannot get a pass for sweeping away a major plot point. Superman purposely depowered himself because of being tampered with, which resulted in an increase in his abilities. The resoultion? Zod simply states that the sun will revert back to normal in a couple of days. Had he stated that without his continued manipulation, the sun would return to normal, that would have sufficed, but explaining it away in a sentence is too Bendis for this comic, not after the good foundation that has been set. Batman also regards Zod as a teenager, when Zod is rendered as a boy who seems to be at least three years from adolescence. It would be good to see a SuperBOY, rather than another teen who can go through the hackneyed tropes of teen superheroing. The Phantom Zone is supposed to remove all powers, but Aquagirl and Big Barda are still as strong as ever. It's not that it doesn't make sense, if you piece it together, but it weakens the scene as their powers overshadow their abilities.

That being said, there's still much to enjoy about this issue, starting with the fight between JLB and the Phantom Zone criminals. It's great when readers are reminded that heroes aren't just that because they have powers but because of their training and discipline (unless you're Aquagirl). Green Lantern fights as we would expect him to, baiting and switching our expectations with his size versus his capability. Mister Miracle does what he should as well. He beats Jax-Ur by doing what he does best, solving the puzzle of his weapon. There's no need for him to become action man and roundhouse kick Jax-Ur, when he can simply disarm him. It's very good writing that remains true to the character, and it's a shame we don't see it more often elsewhere.

Superman's offer to Zod is great, as there's no way we would expect him to leave a child with an abusive parent... though you have to wonder what would have happened if Zod had said, "No". The reveal of his name is priceless, if only for the look on Superman's face which blurts: "Say What?!" We know that there will be challenges with this situation if only from the name, and we can only wonder how Brainiac will be made interesting (he sure is popping up everywhere), but for its portrayal of Superman, and its depiction of heroism as opposed to being an emo, superpowered jackass (see the Phantom Zone criminals), JLB 2.0 has been a pleasant light in the New World of killing ("Injustice" and "Forever Evil"). Let's just hope Superman doesn't have to do anything untoward to this Zod. ;)

Art - 4: Hopefully the team amassed here will remain, as they've gelled well, and with digital comics, that is a plus. Many digitals seem to be a proving ground for artists, and that leads to inconsistent slap-dash appearances. Not here, thankfully.