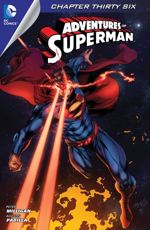 Click to enlarge
As The Demolisher attempts to destroy Metropolis' power source, Clark battles the darkness within himself. Clark wins and is finally able to control the monster within...

Be he only has seconds to stop the impending catastrophe that will bring Metropolis into darkness. You might say that Superman brings a new meaning to 'suck-it-up-and-deal-with-it.' And because of Superman's... um... intervention, Metropolis only experiences a black out for only 5 seconds.

Later, Clark learns that Toyman has escaped. Metropolis is once again fearful for their children. They call on The Demolisher to defend them.

So, Clark gives them what they want.

But the result is not what they expect.

Story - 4: The Good: Great character development. Clark faces the darkness that we all face. We all have the good and the bad within in ourselves. Everyday we must choose which moral voice to follow.

However, with Superman, the stakes are raised. Being almost God-like, the ramifications of an out of control, egotistical Superman would be disastrous to the world. This is what a lot of critics don't get about Superman. He is a man who could dispense vigilante justice and rule the world. Yet, he chooses of his own free will to be a responsible, caring, giving citizen of the world.

He makes that choice everyday. And I love the fact that this story shows us that that choice isn't always easy. Superman gets just as frustrated and mad at the world as the rest of do. But though he has great power, he must always be in control.

If he isn't... the world gets The Demolisher.

I love the 'gas' jokes and references.

The Bad: When Superman does show up to take care of business, people are still ungrateful. I know this isn't always true, but when it does happen, it makes me so sad.

Also, I wish that the writer's had chosen a different villain. I know Superman is about hope and finding the good in everyone; however, it's a little hard to see ANY good in a man who preys on children.

Art - 4: The art is excellent. It draws you into the story. Again, The Demolisher is awesome... but Superman is better.