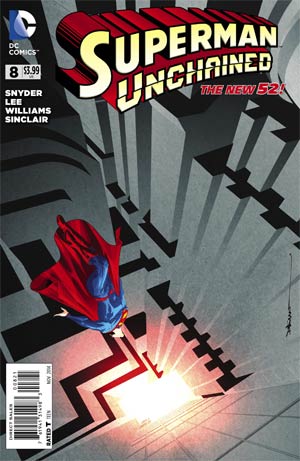 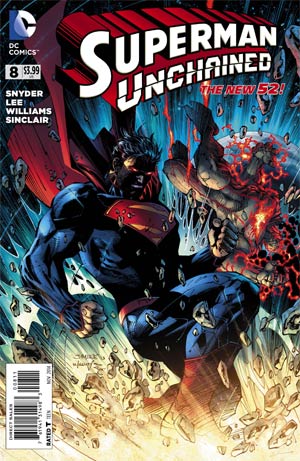 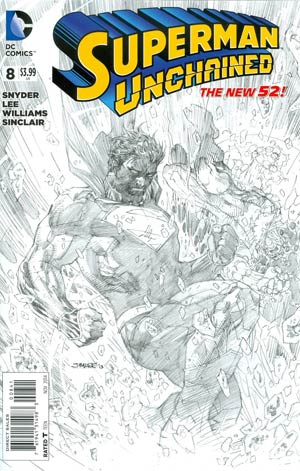 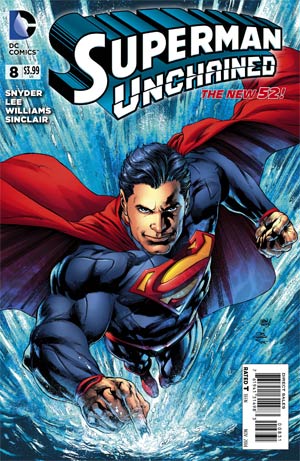 Superman and Wraith fight: CRASH, SLAM, TWIRL, RRMMMBBLLE, KRRAKOOM, WHUMP! Throw in a couple of ego boosting comments, some trash talk, and they fight some more: PUNCH, CRASH, SPLASH, STRANGLE, CHOKE! Superman wins and leaves Wraith to die with a belly full of Synthetic Mineral. Superman, Lois, and General Lane discuss the Earthstone back at what's left of the Fortress of Solitude. The stone is transmitting a signal from the center of the solar system near the sun. General Lane's tanks begin to activate prompting him to blame Superman. Superman claims the stone is resisting him and that it has something inside it. In the distance Superman hears cries for help, eventually finding Jimmy Olsen alone in the snow. Lex Luthor shows up (via hologram) as the mustache twirling villain, with an evil plot to turn Superman into a living bomb using a syringe of "Solar Fuel". He reveals the bomb is designed to destroy the bigger threat of an armada of ships lurking in space. This will be at Superman's expense of course.

So this was actually an issue sort of deserving of the book's title. That is not a compliment. I mean that in a physical and moral since considering Superman Unchained was every bit SUPERMAN UNCHAINED. Superman was Unchained from physical limitations and ethical decisions. He was unchained from the things we should be afraid of Superman being unchained from. He was unchained from himself, from his character. So this Superman chooses to punch things from one end of the Earth to the other, from outer-space to the depths of the ocean, and finally to the outer core of the Earth. You know, to even things up a bit. This Superman punches Wraith straight through the moon and leaves him for dead with a presumably lethal dose of Synthetic Mineral (Wraith's version of Kryptonite) shoved down his throat. This issue was designed to showcase the underdog outsmart a superior opponent. I felt it showcased everything wrong with the "New 52 Superman". Speaking of the New 52, none of this story could possible match the timeframe from 2011 to now. Not that I can figure anyway.

Lex and Jimmy were brought back into the mix, but a little too late I'm afraid.

Superman broke the moon with no All-Star Superman equivalent of concern to the damage he wrought. There was no concern for Wraith as a sentient being. There was no concern for anyone really. Therefore, I'm not concerned with caring about this story or this version of "Superman". This is Superman at a low and this is Snyder at a low. He's better than this and so is the character SUPERMAN. I give it one point mainly due to no Batman despite Snyder's greatest urges, even if he is mentioned in passing.

Art - 4: The art was good, but not nearly worth all the delays.

Cover Art - 2: Hey, Superman with red eyes breaking stuff. We haven't seen that in the last twenty minutes. In all seriousness, Lee masked a lot of his art behind the overuse of line and shadow. Shadow that shouldn't be considering the light source. One of my daughters saw the cover and asked, "Is that the bad Superman?". Indeed it is.

Variant Cover Art - 4: This cover by Dustin Nguyen was really cool. I liked it a lot and would have preferred it to Lee's. Hey, no red eyes or destruction, that's always a plus.