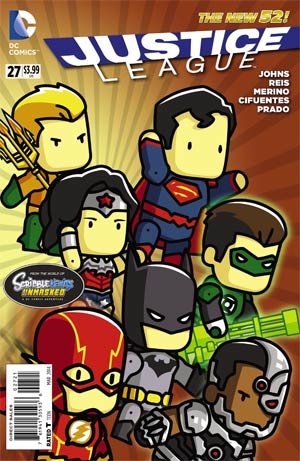 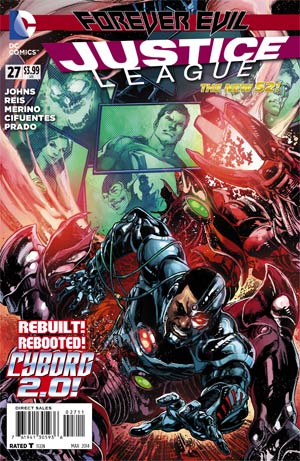 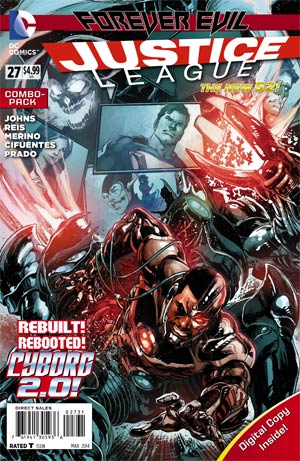 Opening this issue, Johnny Quick and Atomica kill the Doom Patrol. Afterwards, Dr. Caulder decides he needs to "start over".

In the S.T.A.R. Labs "Red Room," Victor Stone has his father Silas and Thomas Morrow make him into the new and improved Cyborg 2.0 as they upgrade all his systems and make him into a more "humanoid" shape. Afterwards, Victor and his father finally reconcile as Silas apologizes for neglecting Victor five years ago.

Cyborg then leaves to gather re-enforcements in the form of the Metal Men as he travels cross-country to Will Magnus who tells Victor that the Metal Men were a failure.

Story - 5: As far as the story goes, this issue was just what we needed to get back into Forever Evil as well as the Justice League's part in all of it. While I enjoyed a few Crime Syndicate spotlight issues of the series, I still read this book for the Justice League. Superman, Batman, Wonder Woman, Green Lantern, The Flash, Aquaman, Cyborg, Martian Manhunter, Green Arrow, and many more, that's who I read this book for, and it was great to have at least one of the heroes of the book take front and center once again, especially since he's the only core member of the team who doesn't have his own solo series.

This issue really brings things full-circle with the character of Victor Stone. Now, there's a reason I didn't say Cyborg, but I will get to that in a bit. I really liked how Silas references the fact that not only did he neglect Victor before he became Cyborg, but he specifically neglected him the day Darkseid invaded, which caused Victor's transformation. Not only that, but I think it's interesting that Victor, who didn't really see himself as human after his accident, wants to look more human and actually embraces the fact that he is a human being, regardless of the mechanical parts included. This is also something Victor would not have been able to do until now. Not in Origin, not in Throne of Atlantis, and not in Trinity War. I'm glad to see him go full-circle there.

Not only does he go full-circle by those standards, but he also goes full-circle emotionally and goes on to forgive his dad, which is another thing he could not do until everything was literally stripped away from him and he had to re-examine his life. I think that's extremely interesting.

Now, the reason I would say the character of Cyborg hasn't gone full-circle yet and only Victor has is because Victor has defeated his own personal demons, but now Cyborg has to overcome what he could have become had Trinity War/Forever Evil not happened, and that is Grid. Once he defeats Grid, I think Cyborg will also have come full-circle as a character in a similar fashion to how Victor has in this issue.

I'll briefly say that I'm interested to see where the Metal Men plot line goes. I'm not a huge Metal Men fan, in fact I don't really care for them all too much, but I'm interested to see what Geoff Johns can do with them. That being said, I do kind of like the Doom Patrol and it was hard for me to watch them get slaughtered by Quick and Atomica, though I'm sure the more prominent members of the team will appear sooner than later to help Cyborg, Batman, and Lex Luthor take down the Syndicate.

P.S. Sadly, there was no Superman in this issue...

Art - 5: Jim Lee and Ivan Reis has done outstanding work on this series and I would be a fool to complain about their work. I really liked this issue's art, Reis did a phenomenal job!

Cover Art - 4: Maybe not the most compelling covers this series has had, but definitely good looking!

Variant Cover Art - 5: Much like how I feel about the Batman/Superman #7 variant, I really liked the Scribblenauts version of Jim Lee's Justice League #1 cover. Nothing but good things to say about it!