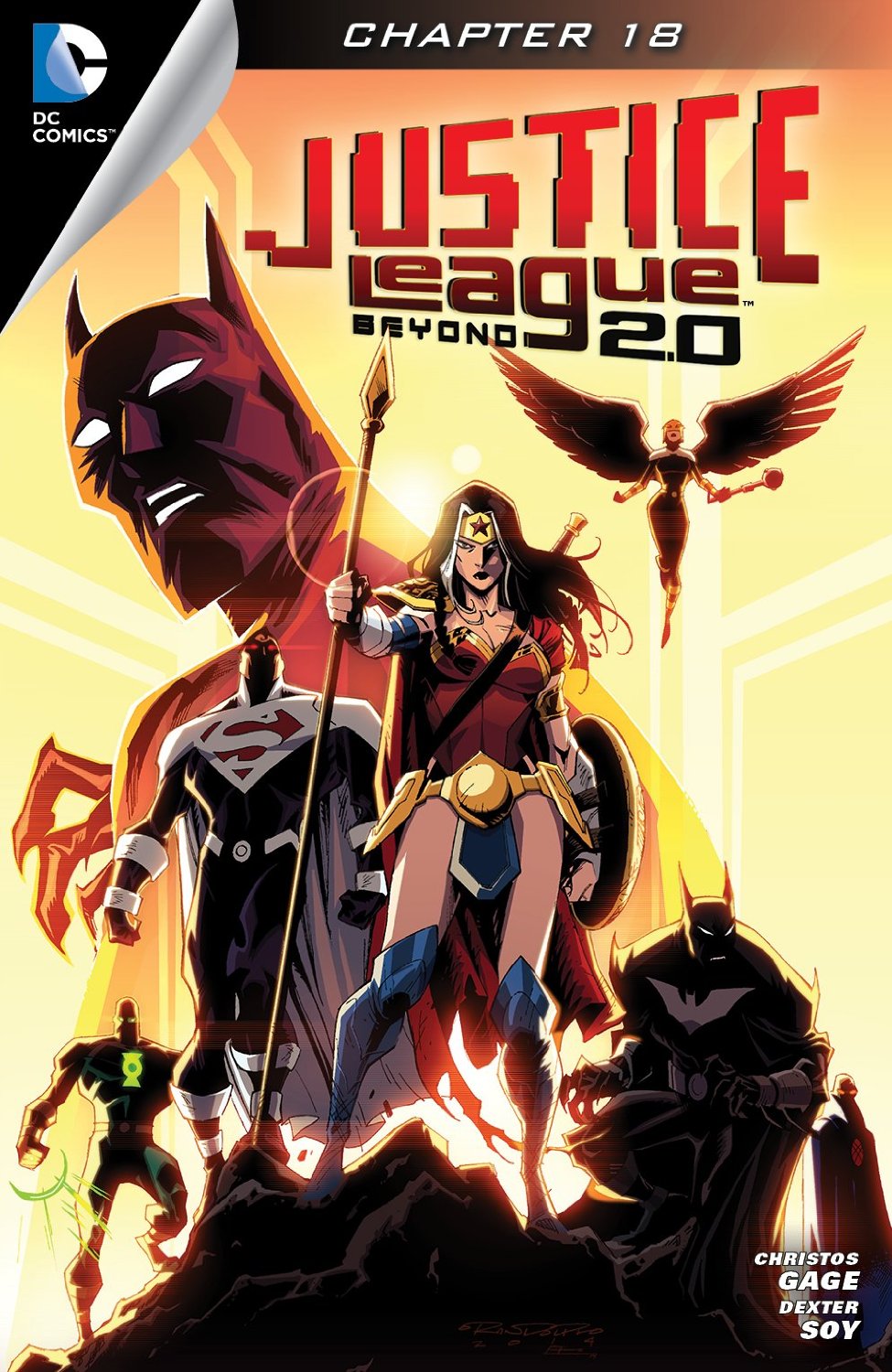 "Justice Lords Beyond (The Return of Wonder Woman): War Stories"

Click to enlarge
Wonder Woman is greeted by the JLB and they cannot come to a consensus as to whether or not it's truly Diana, or her Justice Lord doppleganger. The war between Lord Superman and Lord Batman is recounted, with Diana relating that Aquaman of the Justice Lords' world injected himself into the process, causing a final battle that claimed Lord Batman's life. A peace was etched out, and a new mandate towards maintaining it. The Justice Lords and Diana have no compunction about killing. Brainiac, Darkseid, and others who thought to attack were killed. Threats like the Joker, Poison Ivy and the Parasite have been rendered harmless by lobotomy. Superman listens to all of it, while the rest of the JLB monitors their conversation. When the teleporter activates and recognizes Superman as the authorized user, the JLB is caught by surprise at the appearance of Lord Superman. He is quickly followed by the rest of the Justice Lords. Melee ensues and Superman looks for Wonder Woman, whom he identifies to further surprise, is his "lovely wife!"

Story - 5: Top, top story. The ending of Brainiac's story was altogether creamed for the Justice Lords storyline, and it wasn't something that was embraced by this reviewer. However, this installment is without a doubt one of Gage's best. Again Gage shows how to mix characterization with advancing the story, and without sacrificing the reader's involvement to either. To clarify, if you're in the camp that wants to see more development of the Marvel Family, or wants to better understand the relationship between the Flash and the occupants of the Speed Force, or just want to see Warhawk have more stage time, your wish for any of these isn't granted, but neither is it a remote chance, as the story continues to involve them, and it's a pretty damn good story. The drama of Lord Superman's reveal is balanced by the knowledge that we don't know just how true his words are. That, and the introduction of the Justice Lords (beyond, if you will), with a cast that looks to be just as imposing as the original Lords.

Wonder Woman's story of battle is engrossing on two fronts: it serves as exposition without being thinly veiled, and poses the continuing question as to the function of the Justice League and heroes overall. The Justice Lords are the fruition of that question answered in the negative, but here Gage cross-pollinates and asks what happens when our heroes lower themselves into the realm of the Justice Lord's world. Wonder Woman's story gives us the play-by-play what occurs on the Justice Lords' world, while the visuals work almost to a contrapuntal effect. We hear Darkseid's defeat, but seeing him overwhelmed by the Lords shows something different: a Darkseid drawn with actual fear in his eyes. Wonder Woman says that they aren't murderers, but we see the alternative to murder, and it's equally stalling. It's an "ends justifying the means" scenario and though Wonder Woman is used too often in this vein, largely due to the myopic view of what it means to be a warrior, it's done well. You can feel the age and fatigue in Wonder Woman's words, and when Lord Superman appears, you know why she has become this way. Lord Superman must require all of Wonder Woman's attention; she has the grey streak from attending to him the way a mother would to a wayward child: with concern and worry.

The Justice League Lord come in at the right moments, and don't drag out what we want to see: a match-up between good and evil. Their entry into the Watchtower is all the right moves, and they look imposing and exactly the type of challenge the JLB should be facing i.e. one that they don't look like they can handle. The question that just has to be asked is how Wonder Woman and Batman contended with the likes of the Lords, unless there were some other dopplegangers that came to assist them. Curare, Black Adam(?), Aquagirl, that's more than enough to take out Batman and Wonder Woman, especially with Superman waiting to bat clean-up. It's a question will probably go unanswered, as doing so undermines the story such as it's composed, but the idea that Wonder Woman and Batman could hold out against the Lords would have to be a great story in and of itself, since the premise is so altogether unfeasible.

This issue is a good return to form, meaning a 5 instead of a 4, and hopefully, we'll get a good conclusion out of it as well. I encourage you to read the Batman Beyond issues as well. They aren't needed reading per se, but they do make for a longer story, which makes for even more entertainment. Sorry, to be late with this one.

Art - 3: Aquagirl looks like she was drawn with Kim Kardashian in mind. Reed Richards is impersonating Superman. The Justice Lords entry scene was awesome. Feast or famine, it all depends on how you look at it.