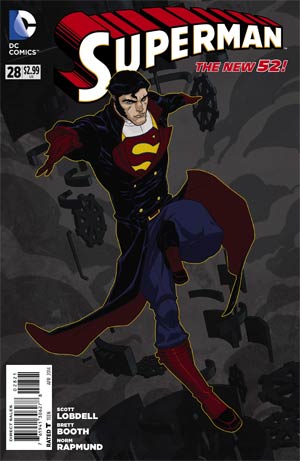 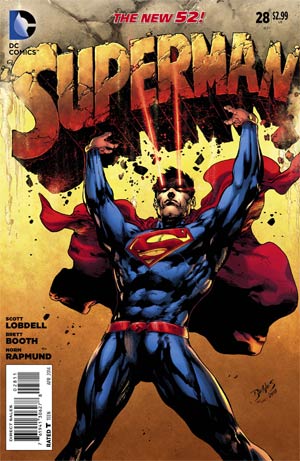 Click to enlarge
Lois is on a 'ride along' in Suicide Slum, investigating a story on a new designer drug that had appeared in Metropolis. Unfortunately they're expected and a barrage of bullets has them pinned behind the squad car. One of the police with Lois is shot in the shoulder and with only a few bullets left the other officer tries her best to fight back. At this moment Lois begins to hear telepathic thoughts and manifests her psionic abilities which she had thought were gone (absorbed by Parasite). With her power she telepathically forces the criminals to surrender.

Elsewhere, Superman is examining a stained glass window that has appeared high above the Earth. The strange ghost window doesn't appear to go anywhere when opened either. Superman's friend Dr. Shay Veritas manifests as a hologram transmitting from her base The Block.

Superman is about to move the window to his Fortress when Veritas stops him. She tells him that the window is somehow pulsing with wormhole energy. Moving the window could destroy the Earth. Superman begrudgingly agrees not to move the window but finds it hard to comply with Shay's request to do nothing to the window and just monitor it.

Superman heads home and is surprised to see someone in his apartment. Inside is newly wealthy billionaire, Jimmy Olsen. Jimmy it seems is desperate to be normal again after his windfall and asks Clark if he can move in with him. Jimmy mentions to Clark he noticed a huge pile of bills and offers to pay them or even buy the entire apartment block so Clark can live there for free. Enter Cat Grant with news that Morgan Edge has offered $13 million to purchase ClarkCatRopolis.com.

In Washington, Sam Lane has just slept with his assistant Gladys. As he ponders recent events he discovers intruders in his kitchen, one seemingly a fan of Malcolm McDowell in "A Clockwork Orange" who holds Gladys hostage, the other a gunman that is quick to point a barrel at Sam's head. Sam disarms the gunman with a kitchen knife and grabs the falling gun aiming it immediately at the other intruders head. As Gladys goes to phone the police the intruder tells him if he dies then Sam will never learn the truth about The Tower.

Back in Metropolis, Clark, Cat and Jimmy discuss the offer by PGN to sell up. Clark vehemently refuses. The reason they set up the blog to begin with was to avoid the corporate stranglehold that had dictated their work. Cat however is feeling the strain of being poor. Clark shares a heart to heart with his friend and reminds her that it was Cat, her drive, her dedication and her strength that convinced him to follow her lead.

Clark points out that they must be doing something right if Morgan Edge is so quick to offer them a cash sale. Jimmy however offers another theory, perhaps PGN wanted the site not because it was successful but rather because it was too close to a story they didn't want revealed and they wanted to silence them.

The next day Clark is investigating the shootout in Suicide Slum and happens to bump into Lois as she is about to leave. Clark can hardly hide his concern that Lois was in the shootout, especially as their friend Mac was injured at the same time, not to mention the recent events. They share a 'moment' and Lois grabs hold of her friend and hugs him with all her might. Then Lois abruptly leaves with Clark reminding her he was only a text away. As Clark tries to chase up a lead that someone is deliberately trying to start a war on the streets Lois looks back at her friend with a smile.

In the South Pacific, on an island, home to Red Hood and the Outlaws, proximity sensors alert Starfire to an emergency and she races to stop it.

As Superman, Clark is allowed to interrogate the thugs that surrendered to Lois, but all they can tell him is that they've got more power behind them than he could imagine. Whoever their benefactor is he has supplied them with weapons capable of beating Superman. The thugs are determined to take back the streets from the Man of Steel.

Superman scans the evidence room with his x-ray vision and notices the weapons the thugs had carried seemed to be alive. Before Superman can investigate further Starfire knocks him down and warns him to step aside lest the Earth suffer if she fails...

Story - 4: Nothing of magnitude happens in this issue, rather we are served up drama moments. This isn't a bad thing - sometimes writers feel the need to blow things up to make their story. Here the dramatic beats flow very well and feed off of the past few issues while teasing us with threads for the future.

Art - 4: The art really shines in action sequences, Superman soaring and threatening thugs looks especially well done as does the shoot out opening page. Very enjoyable art that makes the most out of the action sequences.

Cover Art - 5: A superb cover, absolutely love it! Why can't they all be this cool? Evokes a feeling of 'classic' that makes it all the more awesome.

Variant Cover Art - 4: I'm still thinking 'why' with the Steampunk variants but this is a pretty slick offering with an innovative design, though like Teens Titans #28, still not strictly Steampunk.