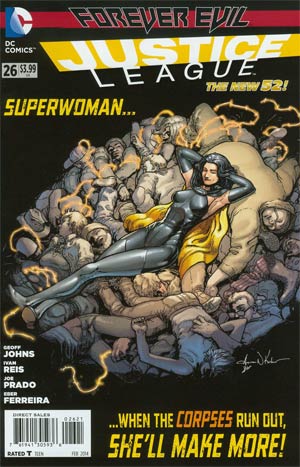 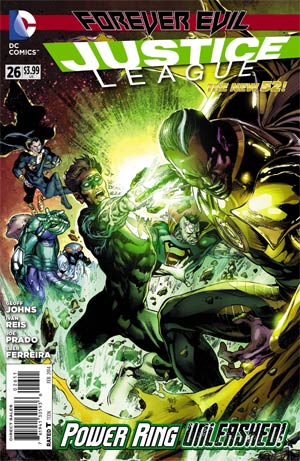 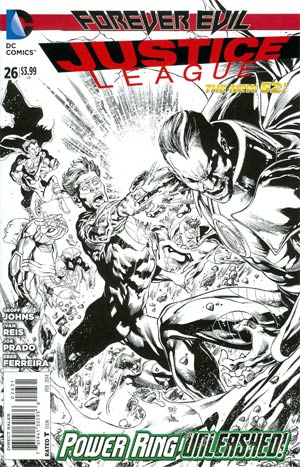 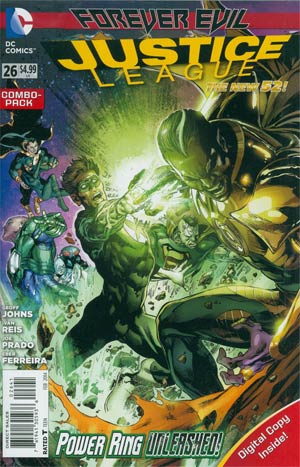 This issue opens up with Grid reminiscing about his initial creation and that all he wants is to feel something like Cyborg does. The Outsider appears to make sure Owlman's request about Nightwing is fulfilled and Grid asks about the mystery man who is tied up, which the evil version of Alfred Pennyworth dismisses.

5 years ago, on Earth 3, we find Power Ring aka Hal Jordan is found by Carl Ferris to be selling secrets about Ferris Air to their competitor, but before Carl can hurt Hal, a green light disintegrates him and brings Hal to Abin Sur, the keeper of the Ring of Volthoom. Abin demands that Hal take the ring from him and when Hal does take it to become Power Ring, Abin laughs as he is now "free". Hal goes to charge the ring at Volthoom's demand and is sucked into a dimensional portal.

Grid then takes us to Central City of Earth 3 where Lenard Snart and Mick Rory, police officers, have Jonathan Allen in custody after he killed numerous people. Before they can get him to Iron Heights, they are hit by a semi-truck driven by Rhonda Pineda. Elsewhere, Johnny and Rhonda have Snart and Rory tied up and are ready to kill them. Rory gives into them because he wants to save his family, but they kill both him and Snart without a second thought. Just then, the police show up and the duo rushes to the roof where a bolt of lightning blasts Rhonda off the roof and into the laboratory of Ray Palmer aka Atomico, where she becomes Atomica. On the roof, Johnny is blasted by lighting and gains his super-speed becoming Johnny Quick.

Professor Martian Stein was revealed to have originally been fighting the Crime Syndicate and tested an experiment on himself in order to do so, thus becoming Deathstorm. Grid then remarks that Superwoman's origin files have been deleted to which he becomes suspicious. In another room, the mystery man tied to the chair smiles. At S.T.A.R. Labs, Victor Stone has stabilized and although his father Silas believes the Syndicate to have won, the new and improved Cyborg tells him that they haven't won yet.

Story - 4: This is another issue where I would have loved to give the book a solid 5, but unfortunately the same initial problem I had with last month's issue is what happens again here. The cover promotes Power Ring battling Sinestro (a Parallax-powered Sinestro I might add...), which looked like a direct continuation of Forever Evil #4, which is why I read Forever Evil first this month, but when I read the book I got something entirely different from what was said to occur.

Am I mad about what we got? Not even a little bit. The story was fantastic and I thoroughly enjoyed it. I was very glad that we got to see the origins of Power Ring, Johnny Quick, Atomica, and Deathstorm as I have been wondering since they appeared at the end of Trinity War how they got their abilities. Unlike Ultraman and Owlman, whose origins are pretty close to their New Earth counterparts, the other members of the Crime Syndicate have always had either more complex or noticeable different origins than their Justice League doppelgängers.

To an extent we even get Grid's origin here as well, which definitely helps the issue to be more relevant as he's the one narrating.

There were many things I liked about this issue, but one thing I was disappointed about is that Superwoman's origin was not revealed. With Superwoman being an Earth 3 version of Lois Lane as well as Wonder Woman (with her being an Amazon and all), it leaves us with a million questions about her.

As for what I really liked? When Geoff Johns left Green Lantern, after about 10 years, with issue 20 earlier this year, I was extremely saddened, but I liked that he took an Earth 3 concept, Volthoom, and made him a part of the mainstream DC Universe. That was very cool to me. What I like about Power Ring's origin is that the First Lantern of New Earth continues to be the ONLY Lantern of Earth 3 in the sense that Power Ring only gets his power from Volthoom, who controls him to an extent. I liked that continuity a lot.

I also loved in Johnny Quick and Atomica's origin that Lenard Snart and Mick Rory, Captain Cold and Heat Wave, are the officers to take in the pseudo-Flash in. Johnny also mentions that he and Atomica also killed Detective Mardon, Weather Wizard, and Sergeant Scudder, Mirror Master, which are two big nods to all us Flash fans. Also, the Ray Palmer reference was genius.

Also, is it too much for me to want the next issue of Justice League to be titled "Forever Alone"?

All-in-all, great issue, lots to talk about, and I definitely enjoyed it.

Art - 5: The day I give Ivan Reis's art a less-than-perfect score is the day I die. I especially loved his close-up of Grid at the beginning. Bone-chilling.

Cover Art - 5: Even though it wasn't the story that was told in the actual pages of the book, the cover to this issue of Justice League just sucks you in. I love everything about it. Although I wouldn't complain if Batman was also put on the cover but hey... Oh well. This would make a sweet variant cover to Forever Evil #5!

Variant Cover Art - 3: This cover was kind of, I don't know, boring? I don't think that's the right word, but I wasn't sucked into it as I was the last two variant covers that Kuder and Anderson did. I like that Superwoman has her own cover, but I don't like the cover itself. It's not terrible by any means, just not exciting.