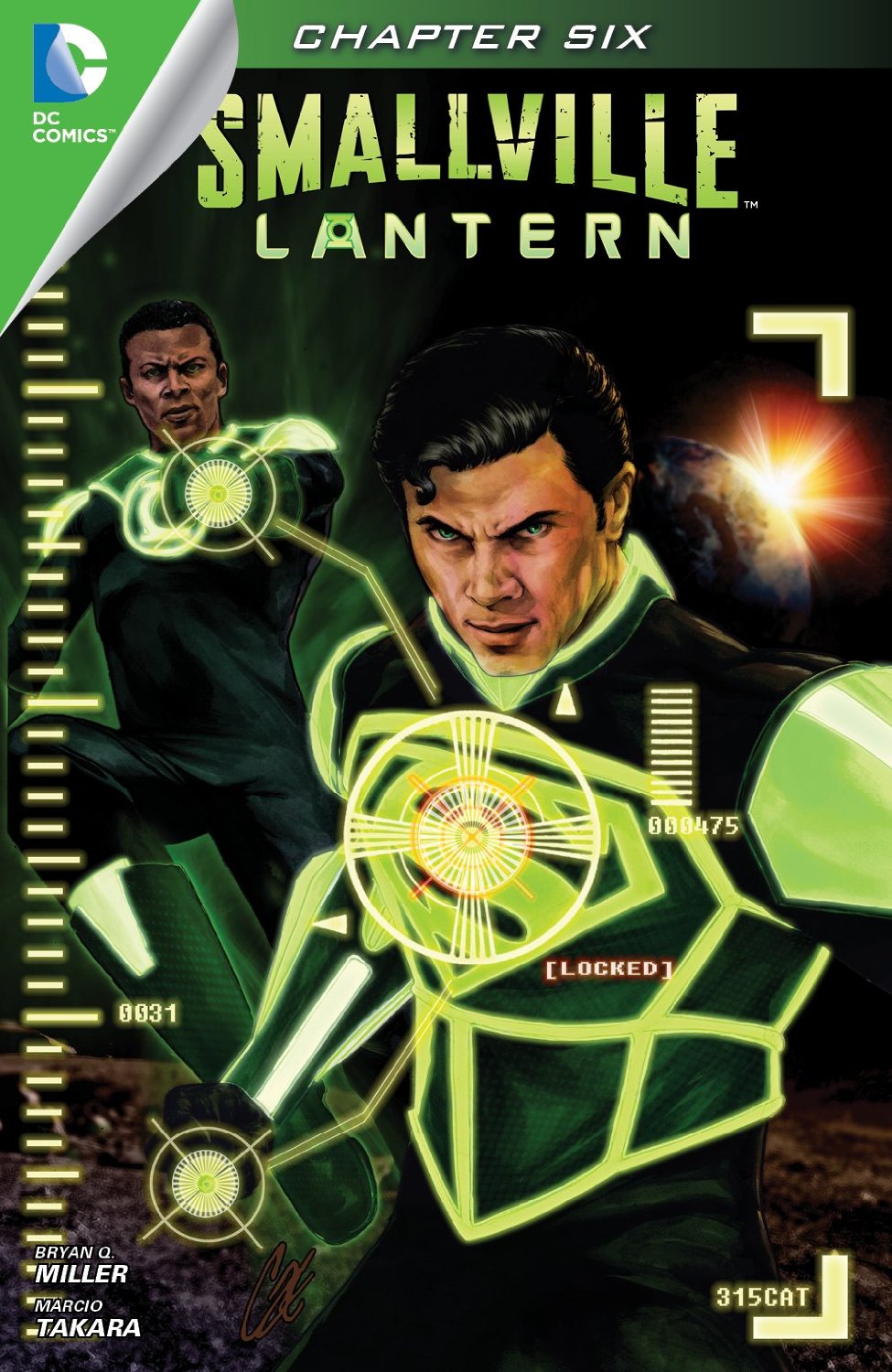 Click to enlarge
The Green Lanterns sift through the rubble left behind after the previous battle with the Manhunters on the moon. While insisting no treaty was broken, they bring Superman up to speed on the Yellow Rings. They were designed by the Guardians in order to better fight the Manhunters. To do so, they harnessed the power of fear. It worked, but at a terrible cost - it unleashed Parallax on the universe, which resulted in the decimation of the Corps.

The Lanterns disperse to return to their respective sectors, but before leaving, Tomar Re tells John Stewart he should know something the other survivors of the Parallax War can never learn.

Back on Earth, Oliver Queen lends a hand to D.E.O. officers searching under the city for Prometheus and the technology he stole. They find him, which turns out to be unfortunate. Using flash grenades and other assorted nasty gadgets, Prometheus easily overcomes the D.E.O. and stabs Oliver before leaving in what appears to be a Boom Tube.

In space, Superman and Stewart investigate the asteroid where the Manhunters originated and discover the evil cosmic entity Parallax. Parallax has imprisoned the Guardians on himself in order to feed off of their fear, which was part of an agreement they made in order for Parallax and the Green Lanterns to leave each other alone. Unfortunately, Parallax believes the Lanterns are gathering to destroy him, and since he's grown tired of feeding on the Guardians, he thinks it's time he started his own Corps... using Yellow Rings.

Despite my past issues with how the Lanterns fit into Smallville's established continuity and how and when past events affect the present, this really is an enjoyable story. It still reminds me a lot of The Last Starfighter, which is a very good thing. (Seriously, can anyone not like that movie?) Superman is swept into an intergalactic war, which despite his previous adventures, is much bigger than anything he imagined.

One impressive thing this issue has done is make me interested in Parallax, which has been historically difficult for me. Frankly, I've never liked Parallax. I always saw it as a cheap ploy to undo the time when Hal Jordan was a villain, which despite its flaws, I always thought was a gutsy and dramatic move. With Parallax, I could practically hear DC pleading with readers, "Look! See? Hal was just possessed! So all those people he killed weren't his fault! You get it, right?" And then they had to cram the thing into the Green Lantern film, as well, and...

You get the point.

But here, I'm intrigued by Parallax. I actually want to know more about it, which isn't something I could say about previous versions.

The Guardians' ultimate fate as Parallax's prisoners/food supply also really resonated with me. It seems more often than not, the Guardians are portrayed as pompous, narrow-minded overlords. At best, just one of them proves himself noble - and it's almost always Ganthet. But here, as a whole, the Guardians have apparently sacrificed themselves for the continued survival of the Green Lantern Corps. And this was no small sacrifice either. They didn't just offer up their lives. They're living in what I assume is perpetual torment, still alive and in a constant state of fear in order to feed an evil galactic entity. It's wild and cosmic and comic booky, but it's also supremely noble. "Greater love hath no man" and all that. We're actually getting a little bit deep.

(If this were New 52, we'd probably learn the Guardians were somehow in league with Parallax all along, but that's another discussion.)

My one contention with this story is how quickly Parallax forgets the Manhunters. No sooner are they gone than Parallax is sending Yellow Rings out for new recruits. I just feel the Manhunters, being long established members of the DC canon, deserve a little more impact than that.

Still, that's a small gripe. Overall, this issue was quite entertaining, and a little bit moving in its own Smallville-y way.

The parts with Prometheus are also intriguing, but I don't have many thoughts on that yet. I need to see where that part of this story leads.

Art - 4: I'm knocking this score up a notch from past scores, and I'm doing it for one reason: Parallax. I really like this interpretation. Everything about it screams "cosmic parasite," which, despite all of its power, is exactly what Parallax is. Previous drawings of it looked like a rejected design from early Spawn comics, and the movie version... the less said, the better. But this is just a great image of a really nasty monster. From the moment its name was mentioned in the second issue, I was cringing, hoping that was all the mention Parallax would get in this story. But from the story to the art, Parallax really stole the show for me here.