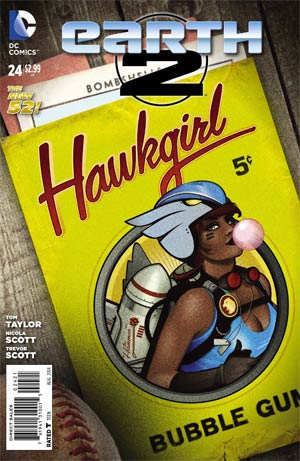 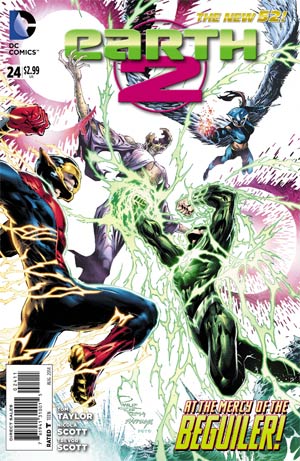 Click to enlarge
The Flash is being tortured by the Beguiler. Beguiler revels in the fact that Flash heals so quickly, which will allow for near infinite torment, but is called away by Bedlam and alerted that the entire second wave of paradaemons has disappeared. Green Lantern is the responsible party and he releases two trapped paradaemons in an effort to track down the Flash. The ploy works and the Flash is rescued. Green Lantern wishes to stay and engage all the invading forces, but Hawkgirl convinces him that only in teamwork can they defeat Apokolips. Green Lantern agrees and they lead the paradaemons away from Washington DC, towards a plan that is being concocted on the fly. On Amazonia, the remainder of the World Army is joined by Batman, Jimmy Olsen, Major Sato, Doctor Fate, and Val-Zod. Batman blames Val for the death of Red Arrow, but Jimmy counters Batman's guilt trip with words of encouragement to Val. Jimmy asks Val what is he hiding under his hoodie, and reluctantly Val tears away his garment to reveal a familiar shield, in a pose that is reminiscent of a certain man of tomorrow.

Story - 5: Finally, some hope. Earth 2 has been a bleak, grim, and despondent ride thus far. It's rare to see a situation become worse and worse, until the promise of a future is all but eradicated. Earth 2 has been ale to do just that, and then grind atop of the grist of the detritus that remains. Earth 2 was able to do just that, and impose the resounding questions of "How does the Earth survive this?" and "What type of world will remain?" Brutaal has imposed such a weight, not only on the story, but on the reader as well, that it's curious that readers return to such a dark scene. However, after so many months of seeing hope inverted and personified into an engine of bed and black Armageddon, in this installment, we're treated to the idiomatic light at tunnel's end, a ray that promises a better day coming, in short, hope, and once more it's represented in the shield from Krypton, in primary colors, and it comes from the most unlikely place and the most unlikely person.

Taylor's attention to team building is coming into its own as of this issue. Unlike the formation of the Justice League, which was more a need to have DC's to heroes together, the heroes of Earth 2, what will probably be the JSA, actually need to be a team, need to work as a team, and don't have time for the silly misunderstandings that lead to in-house fighting, which have become commonplace in team books. Hawkgirl's words to Green Lantern ring true, when she tells him, "We're supposed to be a team," which many team books have forgotten. All the pieces are there, all of the components are fully functional, but without the gestalt they will need to serve and save Earth 2. Taylor has been moving towards it, albeit very, very slowly, with detours and delays for the destruction and death of caused by Brutaal. However, with Brutaal off to visit his folks, we resume the formation of what looks to be a fundamentally sound group, one that may just give the Justice League a run for the money when they finally do meet. That prospect becomes more and more a possibility as the characters are rounded out and we get the missing element from the other earth, Superman.

Val-Zod hasn't done much since his debut and rightfully so. He's a young man that has been thrust front and centre into the end of the world. He's gone from being sheltered to expose in a heartbeat, and is now gaining power at a speed and degree that no one but Brutaal may understand. Still, he has the elements of a certain hero that disappeared after 2011. Val is introspective and peaceful. He wants to help, but he doesn't want to do harm. In truth, the only time that he has shown an inkling towards violence, is when Red Tornado, when Lois Lane appeared to be threatened. The reveal of the Superman shield was worthy of applause, and some questioning. Why would a member of the house of Zod, conceal a top adorned with House of El's symbol? Why is he wearing the outfit in the first place? Terry Sloan may have some hand in it, but for now it's enough to sit back and wait; the book has earned that much patience this going.

The question of killing continues to chase after Superman, and perhaps with Val, we will finally have an answer. Val's pacific nature, in comic books, is the position of the naive fool. If you have to kill, you kill, is what many would say, and too often the hero or person of opposite stance in place in a scenario where killing is the only answer, as if it is some great life lesson to learn - and yet, Superman does not kill. Readers do not want him to kill, and neither does him committing the action lead to any road but the one most travelled: Superman does not kill. Perhaps Taylor, who added to the discourse with Injustice: Gods Among Us, can push the discussion to another level. It would be a complete and utter capitulation to have Val become a killer just as he becomes Superman, and yet, Val has to do something. He must take part in the world that he lives in. Yet, whatever action he takes will reverberate for all the heroes who watch him now and later. Can he save them all without losing and compromising himself? Stay tuned.

Cover Art - 3: Better than the last couple of outings, but still unimaginative and unrepresentative of what the story is about.

Variant Cover Art - 3: Less is more, but this is less than that. How about a full shot so we can actually see Hawkgirl, and not just her bubbles?