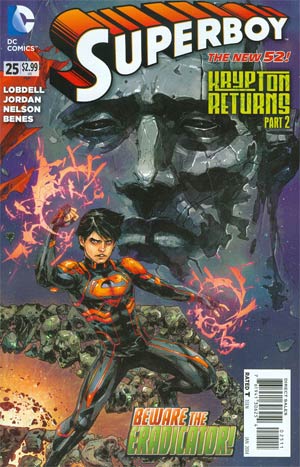 Click to enlarge
Superboy is days away from Krypton's end.

Superman is months away from Krypton's end.

Supergirl is hundreds of years back from Krypton's end.

All three of the family are back in Krypton, Superboy with a startlingly different Kara Zor-El to the clone hater he met in his own time. The two teenagers meet a force of nature born in Krypton's core: The Eradicator. This glowing green corpse is the living embodiment of entropy and wants to ensure that Krypton and all of its children die along with the planet resting in final peace. When the corpse attacks Kara, Kon is barely able to shield her in time but the force of the blow renders her unconscious. Superboy realizes The Oracle designated him this mission specifically and he tries to defeat his foe with all his might.

Supergirl is in the valley of Wartros, surrounded by a clone army of feral soldiers. Kara's solar powers are fading fast but if she doesn't stand her ground the clones will kill her. She instigates a fight with a burst of heat vision and tries to remember her training with Lara. Her mind wanders to learning techniques to turn a foes anger against them just like the time she had to earn her shield by battling her aunt in a challenge.

In Kryptonopolis, Superman is locked in a fight with his own mother. Struggling with emotion at meeting his birth mother and having to complete his mission. Lara mistakes her son for a burglar and is quick to defend herself. Superman however is sick and this is also affecting his state of mind as he worries about altering his own future. Superman's suit alters itself from plain white to black and silver with the large crest of El across his chest. Lara is taken aback and does a medical scan with Jor's equipment. Superman has the very same radiation poisoning Kara had suffered from recently but has a huge amount of yellow solar energy stored within him. Lara is perplexed further and offers to help Superman as soon as her husband returns home. This worries Clark, if he meets his father, how can he bring himself to complete his mission?

Back with Superboy, the battle continues, with the Eradicator swearing to assist Krypton in its death. Superboy resigns himself to the fact this might be his final battle, commenting to himself he will see the red sun rising. Then something clicks. He isn't Kryptonian, the red sun doesn't weaken him like it does natives - including the Eradicator. Kon uses his TTK to connect to Argo City's mechanical core and uses it to make the underground cabling into deadly spikes which impale Eradicator.

Kara wakes up and sees Eradicator's corpse but as she rejoins Kon the quakes begin and Superboy realizes this is the beginning of Krypton's end.

Kara from our time awakens, she blacked out after defeating the clone army. Bleeding, bruised and weak, Kara, realizes she finally completed Lara's teachings and survived completing her mission.

Supergirl picks herself up and at that moment she realizes someone is sneaking up behind her. She realizes too late it is her former lover, H'El.

Story - 5: Despite it being a 'between' chapter, this was a solid Superboy issue. We actually saw a selfless, formidable, determined Teen of Steel. We even had him working with Kara rather than their tiresome relationship in the present. If this were a solo issue I have no doubt the three writers would have delivered a far more immersive story. In a way it would have been nicer to have the other Super family scenes kept to their own books so we could connect better emotionally to Kon.

Art - 5: Ed Benes is one of the best artists in the business. The inking is a bit scribbly in places but there isn't one panel that isn't stunningly rendered. I wish Benes were on the title permanently!

Cover Art - 3: Conversely the cover is just awful - why with the subtitle 'Beware The Eradicator' do you not show a potentially awesome scene? Not only is it quite a bland offering but how old is Superboy meant to be? He looks far too young here. I know Rocafort draws Superman as youthful so his Superboy has to reflect an even younger age but this is a bit drastic.