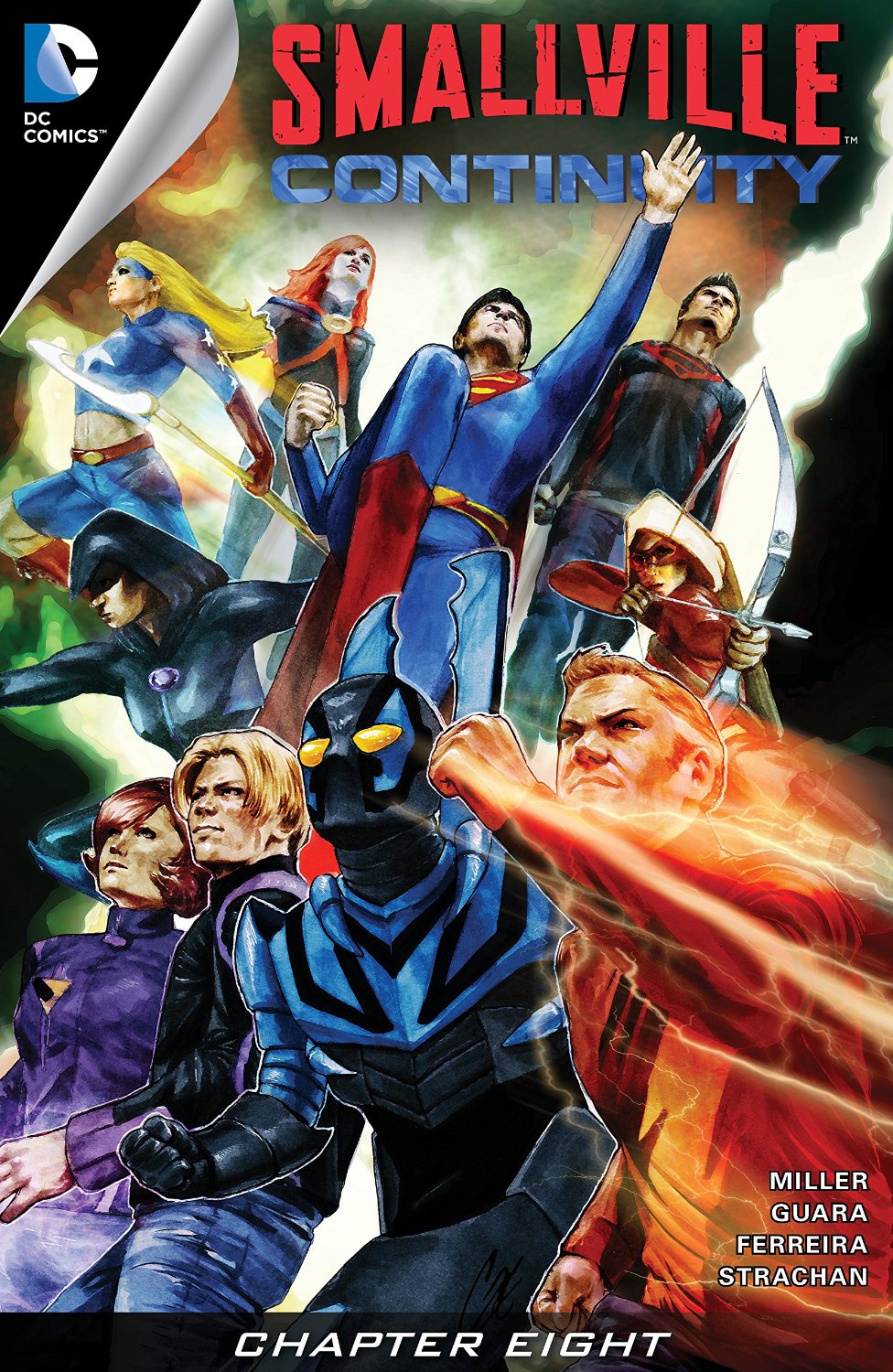 Click to enlarge
Lex is confronted by the Monitors and Manhunters, for the first time ever with no back up plan to exploit, no way out.

Before Lex is killed a truck slams into his attackers crushing them, and out climbs Otis from the wreckage. Lex is for once pleased and grateful to have Otis as a friend only then to see the hapless friend incinerated by a laser of a barely functioning Manhunter. In a rage Lex crushes its skull dropping to his knees in sadness at his loss.

Batman is proving a weak link in the fight with the Monitor warriors. Clark orders him to fall back, get Lois and Chloe to safety and try to re-establish the link to the Monitors' ship.

Bruce is reluctant and asks about Arrow, but Ollie points out he would be a better protector for Chloe and Lois as he has a better skill set for it.

Bruce melts a hole in the sidewalk into a basement safely out of the way of the battle, then with Nightwing at his side they fire their Bat Grapples to get to the rooftops.

John and Aya try to hold back the Omega Monitor and Aya lets slip 'John' rather than 'Lantern John' and John realizes they really must be at World's End.

With might of astounding levels Clark soars upwards then smashes the warrior to a wheezing wreck. Clark tells him to pass a message on to his masters than no more blood will be shed. The Omega Monitor launches a series of cables that capture Superman. The warrior points out that if Superman is broken then the will of his 'Justice League' will too.

Instead of passing the message Superman instructed the Omega Monitor orders the orbiting ship to triangulate his position and fire with all their might.

Clark cries out refusing to be rebooted but the Omega Monitor laughs wheezily that he no longer has a choice.

Story - 5: I can't fault it... well I can - if I ask for more Clark, but honestly his actions, his leadership, his presence, plus the characterizations of his friends... it all adds up to pure Superman gold. In a way it's sad the show never got to make this arc happen... it would have been stunning, but just to see it unfold beyond the show is good enough. I wonder if this earth will be one folded into the DCU proper? It truly deserves to continue. Smallville is actually delivering more Superman action and drama than the current books. - Yes I said it.

I will savor the last few chapters before the end and urge any Superman/Smallville fan to give it a shot.

Art - 5: The artwork after the quick switch has definitely benefited from the break, the consequential art is bursting with an urgency and energy as the chapters continually amp up the action. The Omega Monitor is a suitably scary looking monster worthy of the Justice League's first fight! One thing digital has over its printed cousin is the wait between issues is at a minimum - I miss a weekly Superman book!