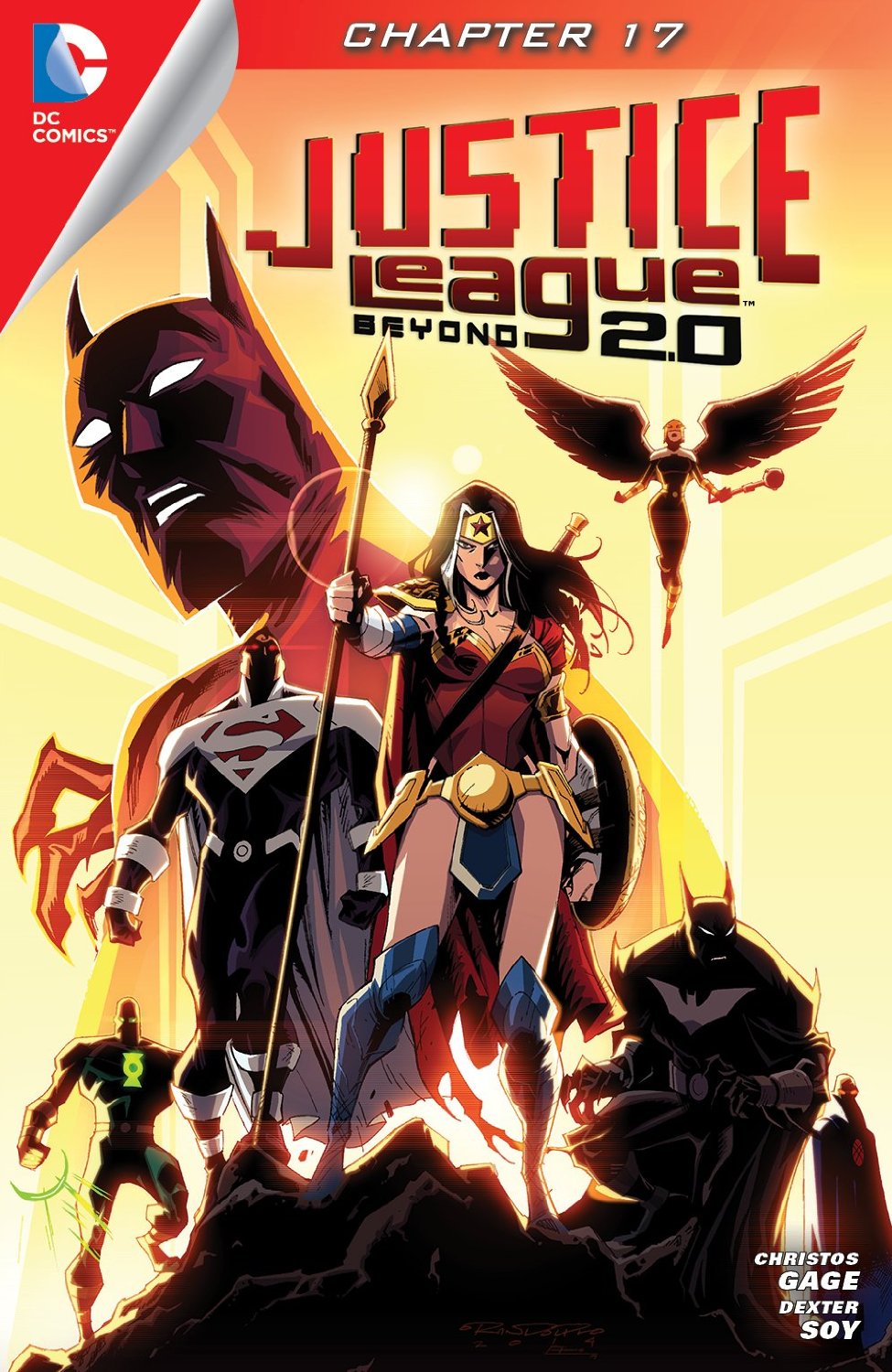 Click to enlarge
Wonder Woman enters the Batcave and sees Bruce Wayne for the first time in many years. She's taken aback by the fact that Bruce has aged, but they embrace nonetheless. Elsewhere, Batman discusses Wonder Woman's reappearance with Superman. Superman relays the events that transpired, which proceeded with the adventure of the Justice Lords. The Justice Lords were dispatched, but Lex Luthor, who was instrumental in their defeat, reveals that the process by which their powers were removed was temporary. The Justice League returned to the Justice Lord's dimension and found the world at war. The League remained to fight against the Lords, but had to return to their world once it was attacked. Wonder Woman remained out of disappointment with her analogue, and Lord Batman sealed off the way. Superman is concerned at what Wonder Woman is about, and Batman offers that they cannot be sure which Wonder Woman returned to their world. Batman is given the assignment to go to the Justice Lords' world, and contact Lord Batman there. Superman returns to monitoring Wonder Woman, pondering how much people can change as he does.

Story - 4: The Justice Lords storyline was one of the top adventures produce by the Justice League series, and while there was one obvious plot point that never quite meshed with the overall action, it was a great story for two reasons: 1) It allowed for viewers to juxtapose their League as opposed to one gone wrong. 2) The story had serious ramifications for the League afterwards, which aided in producing more great stories. However, as to the Justice Lords themselves, they were locked away and never to be seen again... until now. Lex Luthor's revelation that his weapon was a temporary fix comes across as sinister and convenient at the same time. Luthor's treachery stay in line with his character, but it's also a gossamer move to allow the story to happen. That, and the fact that, of course, the Lords are beyond redemption... well, just the ones that really matter. Still, the onset of the Justice Lords crossover is very intriguing, and may just wipe away most the disappointment of last issue.

A query that needs to be posed, if it's ever been asked, is what would happen in the DC Universe if Batman ever went rogue? It's one that bears sounding out, as we have a situation where Superman (once again) and Wonder Woman (same for her) have gone off the mark, and Batman is all that stands between them and total supremacy. If the situation was reversed, meaning that Batman went wrong and was on about taking over the world, would he be able to do so even with Superman and Wonder Woman and the super-powered community at large? Probably not. Still, the premise of Batman being able to contend with Superman, Wonder Woman, Black Adam, etc., just boggles the mind. It's the opening of a large crossover, and hopefully that will addressed, as to how Lord Batman held out until the League provided assistance. Black Adam being added to the roster, makes for a chance that Captain Marvel to take centre stage, but shouldn't Black Adam in the Justice Lords' universe be the good guy? If not, it would mean that there is some serious divergence that abounds in the Lords' world, and it will make for interesting reading later on. However, if the Batman Beyond installments are any indicator, there is a conformity that should be there and Black Adam may be an anomaly i.e. an error.

The Justice League series hinted at a relationship between Batman and Wonder Woman, and was intelligent enough to leave it alone. Since the aforesaid is being broached once more, hopefully the wisdom of olde will stand pat. Wonder Woman is a cipher in the hands of too many writers. She's written as a stock character bruta and then called a warrior. She's a warmonger, and the only language that she speaks is with the sword. The worst of the lot is when she's paired with another hero, for seemingly no other reason that because she's of the opposing gender. Superman, Batman, even Aquaman has been hinted at or put into play, and none of them have had less than nominal results. Wonder Woman's return should allow for development of her character beyond what was seen on the show, just as we've seen with the other heroes. If that's done, it will be the first time in a long while that a writer has paid attention to Wonder Woman's core, instead of trying to link her up.

This will be a long series; 16 installments in all, if you read the crossover issues in Batman Beyond, which I will definitely doing. I'm actually happy about the length as it should the writers plenty of space to really get into a strong story and fully render the actions and ideas of the Justice Lords crossover.

Art - 3: There's a new sheriff on the pencils, and he's done the impossible: he's made Superman look like Reed Richards in both countenance and physique. Not nice.