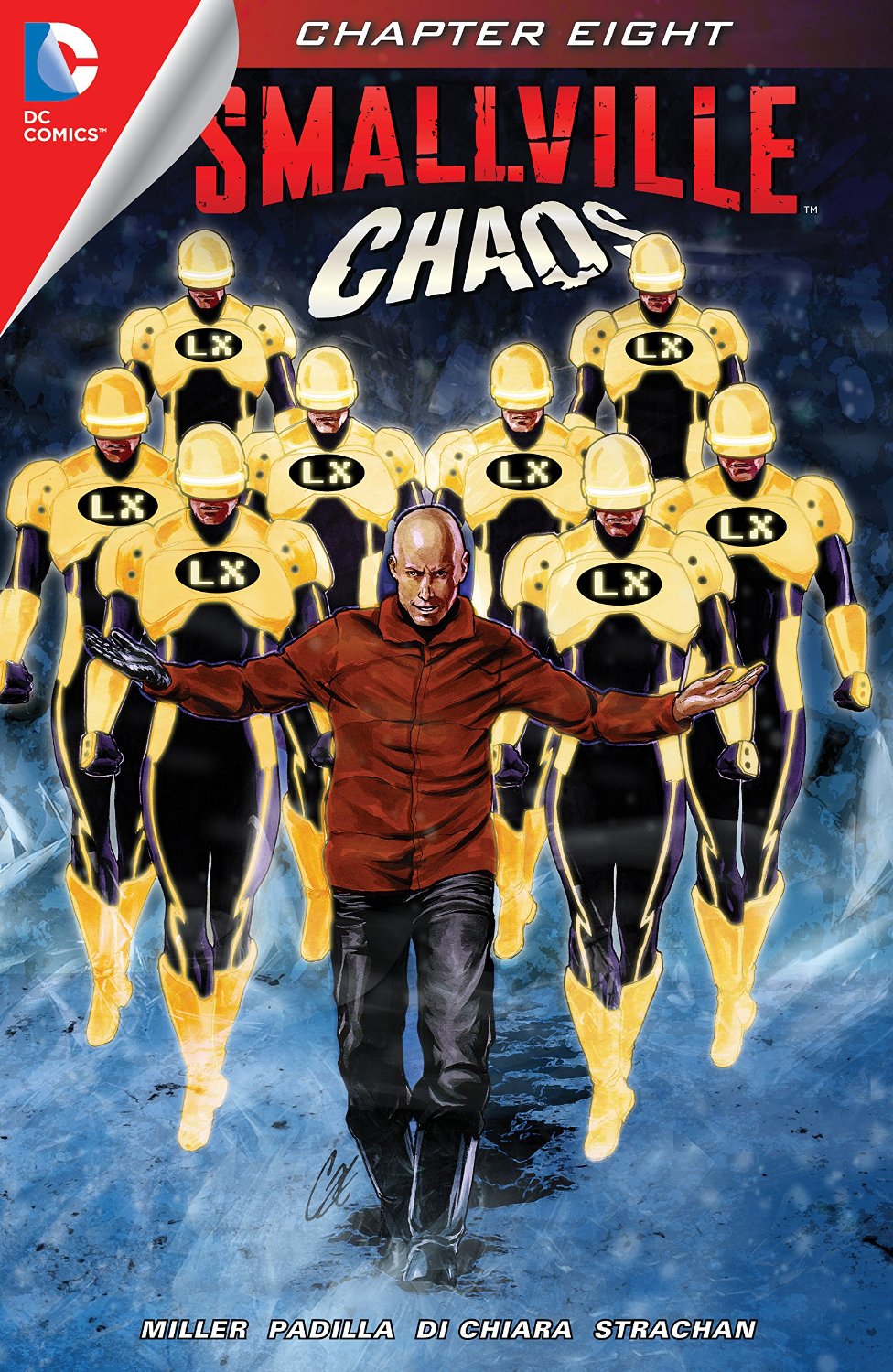 Click to enlarge
Our story begins with Lex Luthor torturing Booster Gold with the help of his Yellow Lanterns. Booster remains defiant, despite his obvious pain. He tells Lex the two of them aren't all that different. They both want to be heroes, he says, but Lex can't shake his greed and ambition. Lex answers that, since losing his memory, he's yet to take a single life. He suspects he'll have to someday, and he doesn't want Booster to be the first. He orders the Lanterns to take Booster's technology and goes to speak with Ted Kord and Michael Holt, who say the proper adjustments are in place with the super collider to accommodate Lex's alien tech. Lex's Lanterns imprison them once again, and Lex order Otis to throw the switch.

Meanwhile, on Earth-Omega, Superman and Lois talk with Darkseid. The ruler of Apokolips tells them he is, in fact, the same Darkseid Clark Kent faced down not long ago. There is only one Darkseid, he tells them, and until recently, he traveled to many universes to bring death and destruction. However, the monitors, he says, broke him. Superman asks for help boarding one of the Monitor ships flying overhead. Darkseid agrees but says he'll need someone to stay with him for entertainment - and he casts his eyes on Lois. Superman says he has a better idea.

Later, Superman, carrying Lois on one arm, follows the Monitor ship into the atmosphere and enters just before the ship enters the Bleed. They lay low while Monitors investigate the duo's forced entry, unaware that stowaways have entered the ship and fearing Bleed contamination.

Back on the planet's surface, Darkseid holds the crystal shard that contains the presence of Jor-El from Earth-Majestic. He says this feels like a second chance and throws the shard into the distance. A fortress of solitude forms, and Darkseid says it could be a new beginning, or a "New Genesis."

Wouldn't that be like the devil scheduling a meeting with God somewhere and saying, "You think we could just skip the whole Armageddon thing?"

This issue was more introspective than previous entries, and not just with the dark god of Apokolips. Lex and Booster also examine themselves and each other. Booster has come to terms with his monumental ego, his need for public adoration, but he's moved past it and is earnestly trying to do what's right. He recognizes those same narcissistic traits in Lex, and he recognizes Lex's capacity for good as well. Unfortunately, Lex is too wrapped up in his drive and ambition to hear Booster's warning.

Smallville: Season 11 has been a bit of a roller coaster in terms of quality. Some stories are great, some aren't. One thing has been constant, however, and that's Lex Luthor. Miller's interpretation of Lex has been the best thing about this series (not unlike it's televised prequel/counterpart). He manages to be a complicated and fascinating character, while also being a fun and entertaining foil for our heroes. In the first issue of Chaos, Lex was well aware that everyone knew he was full of crap, but he didn't care. In fact, during the subsequent "accident," he made no effort to keep from openly smiling to himself. And yet, he also has moments like this issue, where he's forced to grapple with his flaws - and that takes some serious grappling. That's probably why he's so quick to resume carrying out his master plan, whatever it is.

But the Darkseid portion leaves me torn. For one thing, it's hard not to feel a little let down after the last issue teasing us with this confrontation. It was impossible not to immediately envision Superman finally throwing down with the dark god. They didn't have the budget for that in the TV series, but in comics, that's not an issue. However, instead of a super-powered brawl, Darkseid acknowledges he was beaten. Furthermore, he takes no pleasure in conquering this earth, because the Monitors have broken his spirit.

It's an interesting twist on the character. We haven't seen him cast in this light, at least not that I'm aware. The thing is, I just don't like it. Granted, Miller is forced to work within the parameters established by the TV series, and they didn't leave him with anything concerning Orion or the other New Gods. So I can't bring myself to come down too hard on this concept, but it just doesn't work for me. Darkseid is evil personified, and evil isn't supposed to be redeemed.

Art - 4: Despite my inner turmoil over the story, the artwork remains as solid as ever.