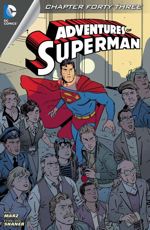 Lois, the ever competitive reporter, is asking Clark Kent about his next boring 'human interest' story. He explains that he is writing about two reunited brothers. They were adopted by different families as young children and had no idea that the other existed.

However, as a hard-hitting reporter, Lois find's Clark's story to be a 'fluff' piece. Clark argues that it's a sweet story worth telling. They argue back and forth until...

The startled employees look out the Daily Planet's window to see a huge fireball falling out of the sky. Clark Kent reaches for his tie...

Meanwhile, a man and his dog, Skip, are tipped out of their small boat when the fireball crashes down into the harbor. But Superman saves them. As he scoops them out of the water and delivers them to the Coast Guard ship, he tells everyone to stay away from the crash site until he can investigate the crash area.

The Coast Guard is more than willing to obey Superman's orders.

As Superman investigates the landing site of the mysterious fireball, two glowing orbs flash out at him from the water. They get closer and closer until a giant robot surfaces from the waters.

Superman tries to communicate with the creature, but the robot flicks Superman off. After crashing into the docks, Superman dusts himself off and returns to the harbor to battle the robot. During the battle, Superman sees that the robot has Superman's family crest branded in its head.

Why does this robot have the Superman shield on its head? Come to find out, it's because Jor-El is its creator.

Story - 3: The Good: I thoroughly enjoyed this first part of Marz's 3 part story. I like the back and forth dialogue between Lois and Clark. Lois is competitive without being 'too' snarky.

Always love the "I've got you" line. Any callback to "Superman: The Movie" makes me giggle in geek-delight.

Superman takes charge. And apparently at this point in his superhero career, the general populace trust's him enough to let him take charge. There is no emoting about what to do, nor is there anyone saying, "Who does HE think he is to order us around?!"

The shocked look on Superman's face at the end is hilarious.

The Bad: Nothing bad to report on this story.

Art - 3: Shaner's artwork is evocative of the 1930's Superman comics. However, Lois and the rest of the characters are dressing in modern style clothes. The colors used are a bit muted. But I like the style. It's simple, yet all the you need is there in the panels. An artist can say so much with just a simple stance from the character. I like when Clark is in the Daily Planet background reaching for his tie. That's all you need to see to know what is going to happen next.