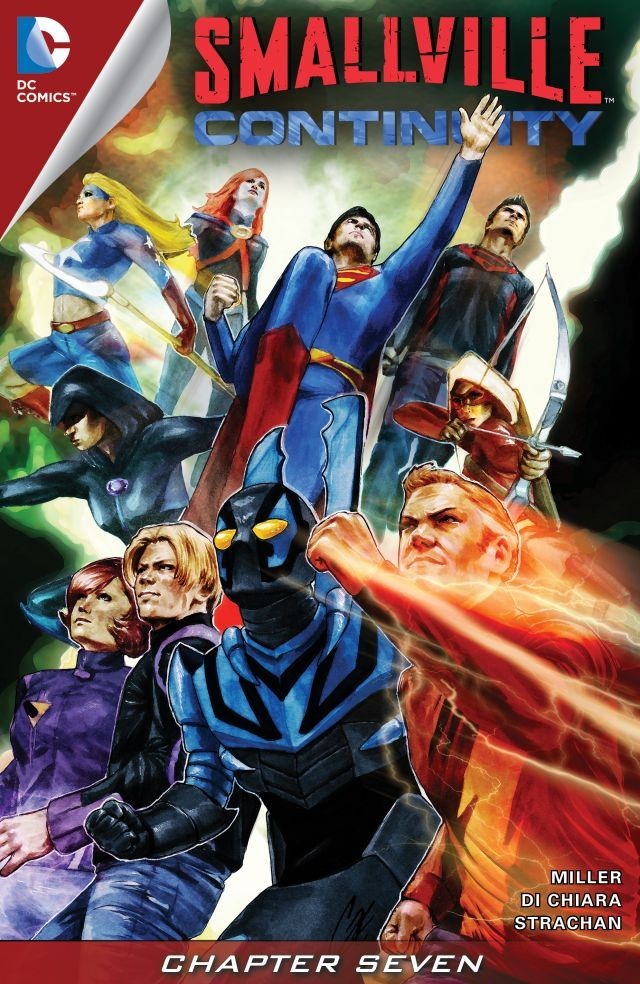 Click to enlarge
Superman spots the pod approaching Earth, feelings of sheer horror aside, he, Kara and J'onn try to stop the pod from hitting its target.

Even with their combined might the pod overcomes them and speeds beyond them breaking the sound barrier. Arrow and Batman are thrown backwards by the sonic boom's force but stare in horror as the pod speeds up and aims itself at Watchtower.

Ollie begs a pregnant Chloe to get out of the base before it is destroyed, but a tearful Chloe tells him there is no time left as she can't outrun the pod. Ollie refuses to give up, ejects his armor and with the help of Batman's bat-grapple he tries his hardest to get to Watchtower.

In the meantime Chloe hears Ollie's 3D printer activate and Tess steps out in physical form. All the heroes race to the Watchtower but are too late to stop the destruction as the pod crashes into the side and it begins to crumble to dust.

A tearful Clark pours on the speed as Ollie cries out. Superman is shocked to see a red tornado explode from the rubble landing Chloe safely on the ground. John and Aya protect everyone with an emerald bubble shield as Superman approaches with a devastated Ollie... but as the dust clears Chloe is unharmed and joined by a new ally in the form of Tess, the Red Tornado. Lois and Ollie hug Chloe while Tess takes Superman aside to explain how she manufactured her new android body also telling Superman about how the Monitors had sent the pod to deliberately sever the virus they had and the link to their network.

Superman asks Tess what was in the pod just as something smashes its way out of the rubble.

Clark utters some rousing words as the heroes swear to fight together now... and forever... against this threat.

Story - 5: It could be argued that this chapter was pretty empty as it was just describing the arrival of the pod - this of course is completely wrong as, like a good cake there are several layers built into the chapter. The pay off of Ollie's chat with Tess comes to fruition with the birth of another hero which in itself is a really big deal, but the Chloe as a damsel in distress side of the book really helped this shine. Ollie really showed how strong a character he is and how much he feels for Chloe. Batman showed he can be part of a team with some lightning fast decision making and Clark showed strength and emotional depth. The sheer amount of characters in the story are making it faster paced and harder to share 'screen time' which is a shame as Lex and Lois were sidelined here and even some of the heroes were background fodder. In context of all the chapters being collected as one, I suppose it doesn't matter however when the book is this good it leaves you wanting more.

Art - 5: What a difference a second artist makes for the second act of the story. Suddenly the detail is upped along with the emotion and Marcelo Di Chiara does a brilliant job to compliment the writing. I would love to interview the writer and artist to learn how different prepping a digital book for weekly release is to the monthly print.

Cover Art - 4: SPOILER! The Flash or A Flash is going to show up! I love this as it is really upping the 'universe building' of Smallville as a book. Plus I'm a sucker for painted covers - I wish Clark was more front and centre but its still fantastic looking!