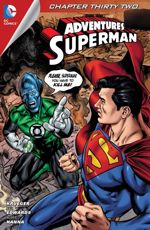 Click to enlarge
In Adventures of Superman #31, a haunted, guilt-ridden member of the Green Lantern Corp desperately sought after the Last Son of Krypton. His purpose, to beg Superman to kill him, for the Green Lantern could no longer live with the guilt of his failure to save Krypton from its ultimate fate.

Superman is devastated at the reminder of his people's demise, but he refuses to kill the Green Lantern. He sees the hero's pain, and he understands the sorrow of not being able to save everyone who is in need.

But the Green Lantern doesn't want to listen to Superman. He doesn't want to be forgiven. He thinks his failure is too great. Thus, when Superman refuses to kill him, he tries to force Superman's hand by attacking innocent people around him.

But if he thinks this will force Superman to kill him, then he doesn't know the Last Son of Krypton.

Superman is angry, but in control.

An orphan's curse would drag to hell
A spirit from on high;
But oh! more horrible than that
Is the curse in a dead man's eye!
Samuel Taylor Coleridge - Rime of the Ancient Mariner

Enter our purple cloaked conspirator from the previous issue. The villain informs the Green Lantern that he is not carrying a Lantern battery, but a piece of Krypton.

It appears that the being had planned the whole thing. He could not find the last Kryptonian, but he knew that the Green Lantern's ring could. So, he used him.

And now, Brainiac reveals himself.

Story - 4: The Good: Superman stays true to his nature. I always like this. I don't need an edgy Superman. I like the Boy Scout who feels deeply, but is not led by those feelings. Superman sees a fellow hero who is in pain. Superman sympathizes and forgives, and he even tells the Lantern that there is a future for him. He tries to give the man hope - as Superman always does.

The mention of Tomar-Re is awesome. Tomar-Re was another Green Lantern assigned to Krypton's section. I love it when other related DC characters are mentioned.

I like Brainiac's entrance, though I was a bit confused at first. Upon a second read, I understood what the writers and artists were trying to convey. Also, the ending is a nice reveal.

The Bad: About the worst I can say is that the first part was a bit predictable. Also, I would have liked to know a bit more about this Green Lantern's time on Krypton, but maybe we will get that in the next issue.

Art - 4: Brainiac is scarrrrryyyyy. I like it. I would have liked to see a bit more of Krypton.