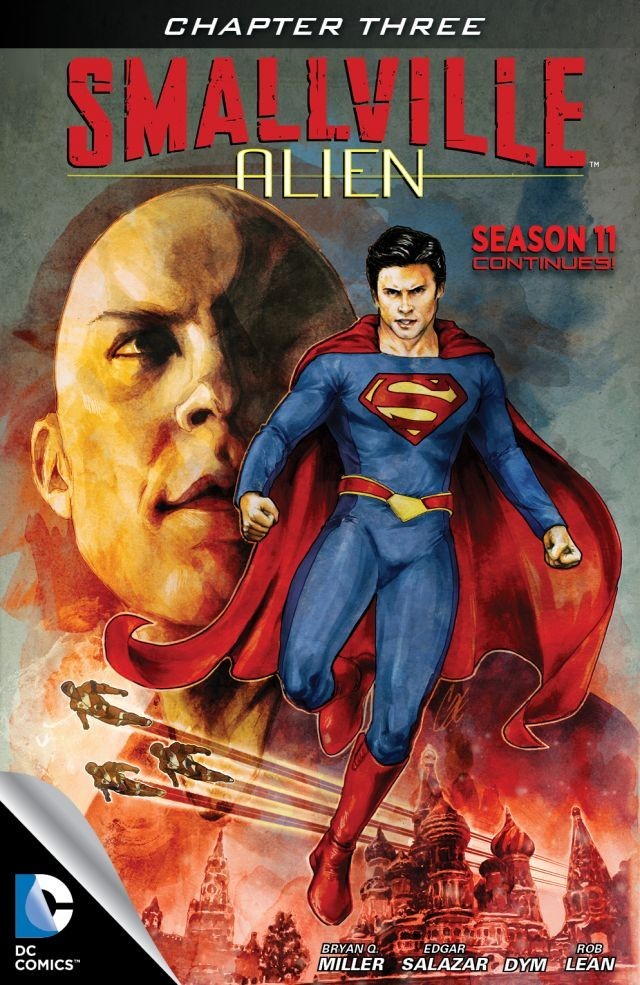 Click to enlarge
A starting-to-show pregnant Chloe (formerly Sullivan) Queen drops by the Daily Planet to visit her cousin, Lois Lane. The two catch up on the latest happenings in each others' lives, like how Clark/Superman is learning to cope with fear and hate directed toward him and how a certain pier in San Francisco needs repairs after what happened in Smallville: Titans.

Meanwhile, our hero - currently in his mild-mannered alter ego - is en route to Russia on a private plane with Lex Luthor. Clark presses Lex to reveal his reasons for allegedly attacking S.T.A.R. Labs a month earlier (he denies any involvement) and for flying to Russia after a UFO crashed there (he dodges the question). Lex then shifts the conversation to Clark, suggesting he should stop putting off his marriage to Lois and stop trusting in Superman.

The conversation starts taking an uncomfortable turn, but luckily for both men, the plane hits a conveniently located storm over Russian airspace. It looks like Clark may have to find a way to sneak away and don his blue tights, but the plane is rescued in mid-air by the Rocket Red Brigade.

And at ground level, the Russian Prime Minister is refusing to speak with the President of the United States. Instead, he wants to know how much Lex Luthor is willing to pay for his latest prisoner - the Monitor who crashed to earth two issues ago.

Story - 4: Although light on action, this story delivers on intrigue and characters.

The opening scene did little more than remind us that Chloe was still around and that Smallville: Titans is part of the Smallville universe, but occasionally, it's just interesting to see the characters we've followed all these years leading their everyday lives, seeing how they react to normalcy instead of another imminent, planet-wide disaster. Chalk it up to my still somewhat recent status as a married man, but I kind of dig seeing Chloe and Lois discuss a baby shower.

Of course, the conversation between Clark and Lex is what really gives this story its score. Even without Michael Rosenbaum playing the role, Lex still carries Smallville. He's a fascinating character study. He treats Clark with mild contempt for reporting back to the Daily Planet ("Reporting back to your masters, are we?"), suggesting that he views anyone who answers to someone else as somehow inferior or failing to live up to his potential. And yet, as the CEO of a corporate conglomerate, he has untold numbers of people who answer to him (not to mention his own personal lackey), and he not only revels in it, but he acts as though that is as it should be. Somehow, he's managed to become part anarchist and part fascist.

That paradox is further illustrated by his hatred for Superman. He suggests he doesn't like the Man of Steel because there's no reason to trust him. As something resembling an authority figure, Superman's actions should always be questioned, Lex says. And yet, underneath that, we (and Clark, for that matter) know the reason Lex hates Superman is because he can't control him and, apparently, because of some good old-fashioned personal contempt.

He's a walking contradiction. (Not the Green Day song.)

Seeing the Rocket Red Brigade was a fun little cameo, but I didn't exactly geek out over it. Sadly, while I'm in favor of internationally diverse superheroes, the Brigade has yet to ever merit much more than a cameo here and there. I'm more interested in finding out why the Prime Minister wants to do business with Lex.

With little superhero action, the art is forced to rely on facial expressions and angles. With Chloe and Lois, those angles remain level with the characters. Very little changes. Everything is comfortable and at ease. With Clark and Lex, it's a different story. There are extreme close-ups, low angle shots, and even overhead views. It's disorienting, just like any plane ride, but it also keeps up the tension between these characters. Stanley Kubrick would be proud, even if there isn't a one-point perspective shot anywhere.