THE END IS NEAR

BURBANK, CA, (June 29, 2010) - To save an earthbound Kryptonian, the Man of Steel and the Dark Knight unite once again - this time to battle the powerful forces of Darkseid - in Superman/Batman: Apocalypse, the ninth entry in the popular, ongoing series of DC Universe Animated Original PG-13 Movies coming September 28, 2010 from Warner Premiere, DC Comics and Warner Bros. Animation. The highly anticipated, full-length film will be distributed by Warner Home Video as a Special Edition Blu-RayTM and 2-Disc Special Edition DVD as well as single disc DVD. The film will also be available On Demand and for Download.

After a spaceship splashes down in Gotham City Harbor, Batman and Superman encounter a mysterious Kryptonian with powers as great as those of the Man of Steel. The Kryptonian is soon revealed to be Kara, cousin of Superman, who takes her under his wing to educate her about the ways of Earth. However, the villainous Darkseid has other plans. Seeing an opportunity to finally defeat Superman, Darkseid abducts and gains control of Kara, utilizing the powerful Kryptonian to do his bidding. It's up to Batman and Superman to save Kara, but they'll have to take the fight to Darkseid within his hostile world - where unknown, deadly threats lurk around every corner, including a brainwashed Kryptonian able to match Superman blow-for-blow.

In addition to the feature film, the Superman/Batman: Apocalypse Special Edition Blu-RayTM and 2-Disc Special Edition DVD include the third DC Showcase animated short, Green Arrow. Screenwriter Greg Weisman's story finds Oliver Queen at the Star City International Airport to pick up his girlfriend, only to be forced into action as Green Arrow to protect the 10-year-old Princess of Vlatava from his old nemesis Merlyn the Magnificent and the League of Assassins. The short features the voices of Neal McDonough (Desperate Housewives) and Malcolm McDowell (Entourage). Bruce Timm is executive producer. 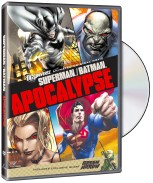