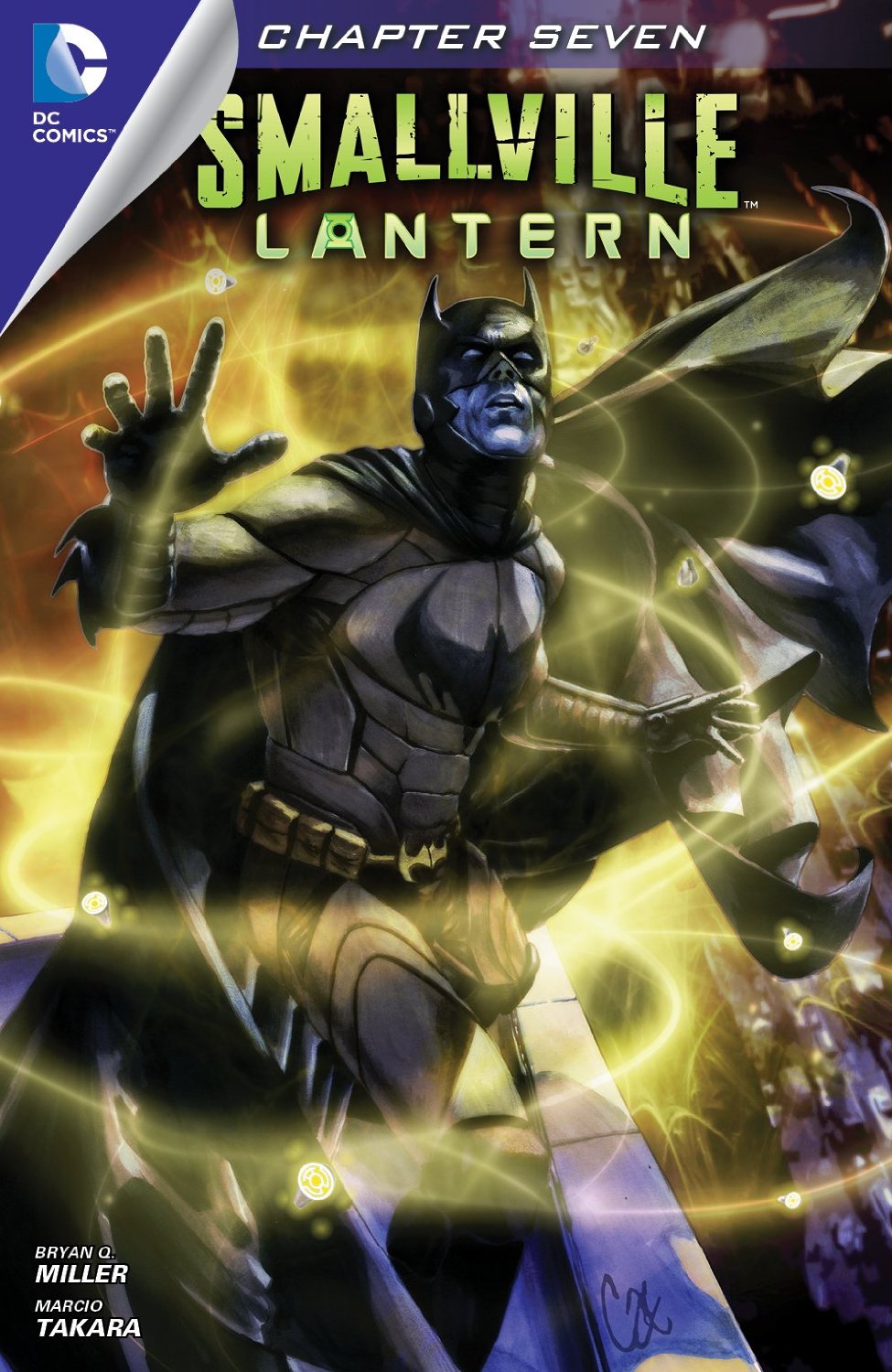 Click to enlarge
The Yellow Lantern rings dispatched by Parallax enter Earth's atmosphere, awakening Blue Beetle and the rest of the Titans in San Francisco. One of the Titans - I can't quite tell if it's the Martian or Raven - is deemed incompatible by a ring, which then moves on in search of another ringbearer.

In Gotham City, Batman and Nightwing are taking down some street thugs as the rings enter the neighborhood. The make a beeline for Arkham Asylum.

Meanwhile, in space, Parallax appears to have the upper hand on Superman and John Stewart, when one of the captured Guardians - Ganthet - orders them to find something the beast fears. He has more to say, but he's unfortunately cut off by Parallax, who promptly tears him in two.

It provides the distraction Superman and Stewart need to escape Parallax's clutches, though. Stewart orders Superman back to Earth to intercept the Yellow rings. Superman reluctantly agrees, then departs, leaving Stewart to face Parallax alone.

Story - 4: It's ironic to have an issue filled with so much setup this late in the series, but that's what we have here. And, frankly, it's good setup. I know I've previously been hard on this series for various reasons, but the past two entries have really bounced back. At least in my eyes.

At first, I cringed at the sight of Batman surrounded by Yellow Lantern rings on this issue's cover. There'd been some talk among some here looking forward to Batman being tempted by such a ring, but I was never crazy about the idea. For starters, it's been explored a bit already in the Sinestro Corps. War story not too long ago. (Okay, seven years isn't exactly that short, but still!) Also, I'm a bit tired of the whole "Batman is vengeance and darkness and anger and FEAR" routine.

Because of that, I was happy to seem him ignored by the rings. At least for now. And besides, Arkham Asylum just makes perfect sense for Yellow Lantern candidates. Is there any bigger gathering place for people who inspire fear in the DC Universe (or multiverse, if you will) than Arkham?

Excellent twist. I didn't see it coming, but I should've.

Outside of that and Ganthet's sacrifice (but I have this weird feeling that may not have killed him), there wasn't much that happened here. This issue pretty much lays the groundwork for the upcoming final act, and it does it well.

Art - 4: I'm coming around on this style. Maybe it's just that Parallax looks so cool. Or maybe it's the nice homage to the Mutants from The Dark Knight Returns in the first panels of Gotham City.

Seriously, that made me chuckle.

Gotham stands out in this issue in art as well as story. The depiction of Arkham Asylum's darkened windows lighting up as the Yellow Rings entered its halls was a fantastic moment. It's always great when you can offer readers just a handful of images, and they immediately know the score. Here, we don't have to see what's happening in Arkham. We know enough about the rings and the asylum, we know it's not good.

It reminds me of the scene in Gremlins when Billy watches helplessly as Stripe leaps into a swimming pool. By then, we knew the score. The image of the pool bubbling was all we needed to know all hell was about to break loose.

The same is clearly true for Gotham.

Cover Art - 5: Yep. I'm handing out another 5. This series' covers are really some of its best.

In addition to being a nice picture, it was also an effective bait and switch. And not in a bad way. I expected to see Batman struggling to refuse one of the rings (and granted, he still might), but then we see the story go in a completely different direction.